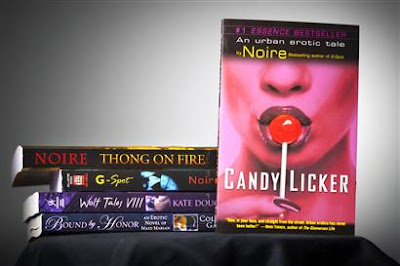 Mainstream publishing has gone sexually wide-open. Seventy-seven years ago it took an order by a federal judge, John Woolsey, to overturn the government’s obscenity ban on James Joyce’s classic novel "Ulysses." But in the past few years, Random House, Penguin, Kensington, Simon and Schuster and others have all inaugurated erotica imprints.

Whatever the reason, publishers are pleased. At a time when overall book sales have been flat or declining for several years “we saw it as a growing opportunity; it has exploded,” Karen Auerbach, Kensington’s director of publicity told me. Cleis Press, a San Francisco Bay area publisher of erotica and other works has seen its sales rise by more than 56 percent over the past three years. (Neither Cleis nor other publishers would release exact sales figures.)

There are even a growing number of erotica book clubs, though, perhaps because of the explicit nature of the material, most don’t follow the same kind of meet-in-my-living-room format readers of the latest Mitch Albom tear jerker employ. For example, writers of erotica read their works at the In The Flesh reading series organized by writer and editor Rachel Kramer Bussel once a month at the appropriately named Happy Ending Lounge in Manhattan. The Erotic Literary Salon convenes every third Tuesday at a bar in Philadelphia. Online clubs and blogs like http://www.erotica-readers.com/ allow consumers to meet virtually. This month, Cleis started its own online book club.

Romance novels get raunchy
While erotic reading events may appeal to the kind of urban hipster who knows where to get the best chai lattes in Brooklyn, consumers of more traditional pulp romance are being enticed to cross over into erotica, too. The romance genre, which has traditionally featured passion in the context of adventurous love between one man and one woman and was rarely explicit, has expanded over the past several years to include bondage, fetish, multi-partner sex and same sex scenes. "Bound by Honor," for example, a book released last year by romance writer Colleen Gleason writing under the name Colette Gale, is a retelling of the Maid Marion/Robin Hood story.

“At court, Marian is torn between her duty to the queen and her desire for two men: one, the mysterious highwayman the peasants call Robin , and the other, the dark, cold Sheriff of Nottingham,” the book’s promotional summary reads. “Given an impossible choice, she must submit to the carnality of Prince John’s court in order to fulfill her duty and maintain her honor.”

Of course she does.

“I tell people that if it were a movie it would be XXX-rated,” said Gleason, a 43-year-old Michigan wife and mother whose first erotica book wasn’t released until 2007.

Following the Ulysses case, and Grove Press braving prosecution to publish "Lady Chatterley’s Lover" by D.H. Lawrence and Henry Miller’s "Tropic of Cancer" in the U.S. in the 1950s and 1960s, sex in literature became increasingly acceptable. But novels and short stories in which erotica was the point were relegated mainly to fringe players. Now it’s mass market.

“Noire has been really fantastic for us,” Melody Guy top editor at One World/Ballantine, part of the Random House book group, said. “We launched her in 2005 and continue to sell her backlist.”

(Full disclosure: My most recent book, "America Unzipped," was published by another Random House imprint and I wrote an introductory essay for a book published by Cleis.)

“It reflects readers’ reality,” Guy explained. “The very real environment feels authentic yet there is still the fantasy of the sex … Noire was about the first person to define this; she tapped into something at that moment.”

The popular author may have a huge following, but due to the topic she writes about, she keeps the personal details about her life private. She won't reveal her real name and while she has a career outside of writing books, she won't say what it is.

“I am the type of writer whose books are pretty tough,” said Noire. “My situations are not necessarily filled with drugs and violence, but they are filled with what can happen to you when you are wayward and living on the streets. They are cautionary tales, but the sex is off the hook!”

Her first book, "G-Spot" was an almost instant hit as was her follow-up, "Candy Licker."

“I do get fan mail and I see a growing number of male readers,” Noire said. “Lots of men say they borrowed the book from the girlfriend. And I’ve been surprised at the number of gay men.”

“We have everything, across the board,” Kensington’s Auerbach said. “Readers think variation is the spice of life ... We have a warning on the back of the Aphrodisia books, a little box, that says ‘This is a really hot book. It is sexually explicit.’ Readers know what they are picking up.”

Brian Alexander is the author of the book “America Unzipped: In Search of Sex and Satisfaction," now in paperback.