Ama Adair first got the idea for her book series on a dark, narrow road in Baghdad, Iraq, as her military convoy drove past seemingly abandoned buildings and the hair on the back of her neck stood on end.

A Navy chief warrant officer specializing in counterintelligence and human intelligence, Adair didn’t begin writing until about six years after that 2010 deployment. But her vivid real-life memories helped shape her thriller “Shadow Game,” published in October under the name A.M. Adair. The book is the opener in a planned three- or four-part series.

“No damsels in distress or princesses here,” says Adair, a Virginia Beach resident. “She is a powerful, intelligent woman who is not very emotionally driven. She certainly doesn’t need rescuing. I would love if my daughter and other girls could see more characters like her.”

Ama Adair's book, which published in October, is the first book in a planned three- or four-part series. (Courtesy of Ama Adair) 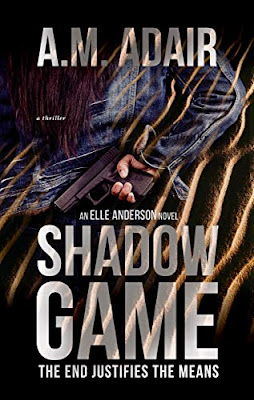 As a first-time author, Adair, 40, had a steep learning curve with the writing, editing and publication process. And as a mother with a full-time job, she had to squeeze much of her writing into two- to three-hour sessions on evenings and weekends. Her husband Jake, an active-duty Navy chief, took over parenting whenever he could.

“Luckily, military life trained me for not sleeping a whole lot,” Adair says. “Things got easier once I let my characters take over and stopped trying to force the plot. A lot of my own ideas for how to get to the key scenes I wanted kind of disappeared, which made it more fun.”

Although the series is fictional, Adair’s 10 overseas deployments — including four in Iraq and one in Afghanistan — served as background research. In fact, creating Anderson’s story helped Adair address some of her own feelings: “Elle goes through some post-traumatic stress and a lot of physical and emotional challenges. I found it very therapeutic for me.”

An Ohio native, Adair joined the Navy shortly after 9/11 and has lived in Virginia Beach since 2005. While always interested in reading and journaling, she had no writing training beyond school classes and the formal military papers required in her job.

After years of considering a novel, Adair typed the first chapters of “Shadow Game” on her laptop during downtime on a 2016 deployment in Italy. A self-described introvert, she found the solo pursuit a perfect fit.

Back home, Adair often settled down to write in a favorite recliner after her kids Arya, now 7, and later baby Finn, born last April, were asleep for the night. She also has juggled work toward an online bachelor’s degree in intelligence studies through American Military University.

The 300-page “Shadow Game” took about nine months to finish, followed by a similarly long editing process. “It was often me being too wordy,” she says. “I discovered that having too many details actually slows down the tempo.”

Since Adair is active-duty military, the Pentagon had to screen her thriller before publication. “Shadow Game” was released through Kindle Direct Publishing with representation by Story Merchant Books, a company that facilitates such independent publishing. It is currently for sale exclusively on Amazon.

“I was a complete nerd when it came out,” Adair says with a laugh. “I immediately ordered like five copies of it, plus the Kindle edition. I was in awe holding it.”

Adair is almost finished with book two of the series, “The Deeper Shadow,” which she started in 2017 but put on pause during her most recent pregnancy and Finn’s newborn months. She hopes to publish it in the summer and then immediately dive into book three. Once she retires from the military, her dream is to be a full-time writer.

“In a perfect world, I’d do a lot of hanging out with my laptop and some good cups of coffee,” she says. “I just want to let my imagination keep taking off.”