Camille Paglia: Sexism and the 'Star Is Born' Films 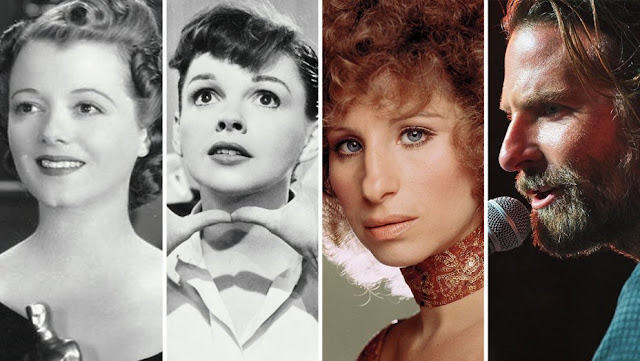 The academic, author and cultural critic analyzes the four versions of the tragic love story and finds one a "feminist landmark" and Bradley Cooper’s to be "a misogynous disgrace."

A Star Is Born, with its symmetrical plotline of rising and falling stars, is Hollywood's canonical myth-saga, capturing both the glory and cruelty of the modern entertainment industry.

The fourth version of A Star Is Born, directed by Bradley Cooper and starring himself and Lady Gaga, has been nominated for eight Oscars at this year's Academy Awards. How does this movie treat our red-hot theme of women's aspirations and achievement? Surprisingly, despite its progressive gestures toward masculine sensitivity and transgender inclusiveness, this A Star Is Born is the most sexist film of the entire series.

In Cooper's film, the epic Hollywood story has been hijacked by camera-hogging male vanity, curtailing the magnificent classic role of the ascending woman star who painfully eclipses her self-destructive, alcoholic husband. What the script has stingily left to Gaga to play is not leading lady material. Her performance has never belonged in the best actress category because Cooper demoted her to supporting actress from the start.

Particularly outrageous amid the overpraise of Cooper's film has been denigration of the previous, 1976 version, with Barbra Streisand and Kris Kristofferson, from whose performance Cooper heavily borrowed. Except, that is, for Kristofferson's robust sexy allure: With his greasy hair, hobo beard and chronic slump, Cooper scarcely manages more than two facial expressions (dull and duller) throughout.

The dynasty of A Star Is Born began with What Price Hollywood? (1932), in which a waitress (Constance Bennett) is discovered by an alcoholic movie director, who steers her to Tinseltown fame at a time when the phenomenon of movie stardom was barely two decades old.

Janet Gaynor, the heroine of the first A Star Is Born (1937), had won the very first Oscar for best actress for 1927. The girliest of the four, she was already 30 when the movie was shot, which explains why we sometimes feel a strain in her miming of fragile innocence. However, Gaynor's Esther Blodgett is gritty with ambition, inspired by the movie magazines she devours in her North Dakota farmhouse.

In the wake of American women winning the vote after World War I, the film foregrounds the then-new theme of female careerism. Esther rejects marriage and motherhood as her only choice: "I'm going to be somebody!" Overarching the film is her outspoken grandmother, a formidable dowager played by May Robson, who supports her drive to succeed and identifies it with her own generation of pioneer women who braved immense hardships. At the end, the grandmother, stronger than the heroine's dead spouse, reappears and plants her female flag in Hollywood, forcing Esther (now Vicki Lester) to embrace her professional dominance.

The film explores the unresolved conflicts still experienced by many women in balancing home and work. Most studio-era movies showed women eagerly surrendering their job for a wedding ring. A trace of this remains in the first A Star Is Born in Vicki's decision to abandon her career to care for her husband (Fredric March), who is struggling with substance abuse. But in a heroic gender reversal, he frees her by sacrificing himself, walking into the sea at Malibu.

Oscars: How Did 'A Star Is Born' Become a Longshot for Best Picture?
From its opening panorama of the glittering lights of Los Angeles, the 1937 film exhilaratingly documents the sights, rituals and churning mechanism of the movie industry, from clapper boards, screen tests and Central Casting to premieres, awards shows and mobs of ruthless fans (who tear off Vicki's veil at her husband's funeral).

Clinically inspected and processed by the brusquely efficient makeup and publicity departments, Vicki emerges with a new name and life story. She has become that supreme artifact, the movie star. All this sweeping expansiveness — the wilderness through which the fairy-tale heroine apprehensively makes her way — is missing from the disjointed Cooper film, which claustrophobically contracts to Jackson Maine's stalled relationships with other men. The ravenous industry in which Ally (Gaga) rises is hardly glimpsed.

The Judy Garland version (1954), like the Gaynor film, has a tremendous sense of place. It begins with the thrilling magnitude of spotlights, clogged streets and surging crowds at Los Angeles' Shrine Auditorium, palpably vibrating with the excitement of old Hollywood. Compare this riveting specificity to the fogginess of the Cooper film, where we're never sure where we are. (Does Jackson live in Laurel Canyon or Santa Barbara? Does Ally live in New York or the San Fernando Valley? If the latter, why is she taking a jet plane to see Jackson's show, which is presumably in L.A.?)

The Shrine event is shockingly disrupted by drunken, belligerent Norman Maine (James Mason), who lurches through a backstage bevy of ballerinas and showgirls. Unsparingly presenting Maine as arrogant with male privilege, the script prepares the way for the tragic intensity of the love story. In contrast, Cooper upgrades himself to lovable stumbling klutz, merely drawing a few hard glances from fellow musicians. He thus defeats the entire redemptive pattern of the three earlier films.

What astonishes about the Garland version is how often she appears in daringly half-male clothing with a butch haircut. This film's Norman Maine, whose predatory womanizing is seen at the Coconut Grove club, zeroes in on Garland's Esther in androgynous mode — a man's bow tie and long tuxedo jacket flashing pert legs and high heels. Directed by openly gay George Cukor, the movie suggests a hidden sexual fluidity in Norman, also shown when he enthusiastically subs as Esther's makeup and hairstylist.

In the Cooper film, in contrast, Jackson fails to recognize a false eyebrow and ickily peels it off Ally's forehead like a parasitic slug. Inexplicably, Cooper sets the scene in a glossily sanitized drag bar while missing a huge opportunity to showcase Lady Gaga in drag — as in Marlene Dietrich's swaggering cabaret style.

The tour de force of the Garland Star is her epochal performance of "The Man That Got Away," a torch song that became an anthem for gay men in the pre-Stonewall era. Here we see the supranormal power of the true star: Garland's petite body literally throbs with profound passion, repeatedly arcing from soft to loud and back. A gifted performer operating at this level of near-mystical inspiration has entered an abstract realm beyond gender.

In the third A Star Is Born (1976), John Norman Howard (Kristofferson) is a rock star, while Esther Hoffman (Streisand) fronts a biracial trio, the Oreos. One of the greatest romantic scenes in film history is achieved by Streisand and Kristofferson when he charismatically improvises lyrics to her exquisite piano riff ("Lost Inside of You"). Two minds and bodies meld, as the locale shifts to a candlelit bathtub, where Esther flips sex roles by rouging John Norman's cheeks and tenderly tagging his eyebrow with transgender glitter.

Cooper's Jackson generates credibly hard-edged guitar rock in scenes filmed at several music festivals, but they are less well photographed than those at Arizona's Sun Devil Stadium in the Streisand film. Furthermore, the overall soundtrack of the new A Star Is Born is bland and forced. Gaga's pop singing still lacks subtlety and finesse. She and her hard-core fans mistake applause-milking bellowing for emotional authenticity. Truly great singers, from Aretha Franklin to Adele, know how to express and temper emotion at high volume.

A harrowing highlight of the series is the ritual humiliation of the leading man. The Gaynor and Garland films are gut-wrenching in showing the cold contempt of other men for a wounded alpha male as he tumbles down to become a mere adjunct to a more successful woman. The public scenes at Santa Anita racetrack, where Norman is shunned, derided and slugged to the floor are unforgettable, as are the private scenes where he is idly housebound and painfully called "Mr. Lester" by a delivery man.

Barging drunk into the Academy Awards banquet, Norman ruins Vicki's supreme moment with his bitter rant against Hollywood. In the first two films, he inadvertently slaps her, drawing gasps from the crowd — a fiasco that starts his slide toward suicide. In the Streisand film, a decade after the birth of second-wave feminism, the venue switches to the Grammy Awards and, significantly, there is no physical blow.

At the Grammys in Cooper's film, the tipsy Jackson simply slips en route to the stage with Ally. And it all ends in infantile passivity: Jackson pisses his pants in full view of the audience. This ugly scene, which reduces a triumphant career woman to a gal pal awkwardly hiding a urine spill with a flap of her gown, is a misogynous disgrace.

In retrospect, we can now fully recognize Streisand's A Star Is Born as a feminist landmark. Wandering into a low-rent club, rowdy John Norman is instantly attracted to her Esther when she sticks a mic under his nose and sternly rebukes him, "You're blowing my act." Garland's androgynous costumes are revamped by Streisand's gender-bending outfits ("from her closet," say the credits), including a belted Cossack shirt with high boots.

Finding John Norman in bed with a groupie, Esther says in white-hot fury, "You can trash your life, but you're not going to trash mine," then speeds to the game room to smash his liquor bottles with a pool cue, in spectacular close-up. After his death in a James Dean-like car crash, Esther (introduced as "Esther Hoffman Howard," rejecting the previous films' female erasure of "Mrs. Norman Maine") reappears for an operatic solo of grief, defiance and transcendence.

Streisand takes the audience prisoner in this almost unendurably protracted single take, a raw assertion of female ego and power. Then the credits flash with her multiple roles, starting with executive producer. Streisand was setting the terms for the new frontier: women in Hollywood seizing control of their own creative universe.