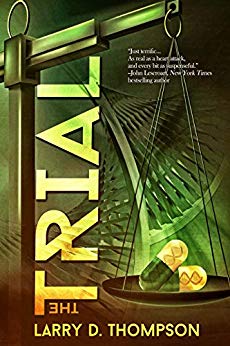 
Luke Vaughan thought he had retired from trying lawsuits. That was his intent when he left Houston and moved Samantha, his teenage daughter, to his hometown of San Marcos, Texas, to establish a low-key office practice. Instead, he found that he traded the stress of trial work for the greater stress of raising a rebellious daughter. After Samantha volunteers as a subject in the clinical trial of a new antibiotic that both the drug company and the FDA knew was dangerous, she develops liver failure.

Unable to pay for a liver transplant, Luke is forced to return to the courtroom one more time in a last-ditch effort to save his daughter's life. When Luke's efforts expose fraud and corruption in both the drug company and the FDA, he is suddenly confronted with a ruthless adversary who is willing to resort to bribery, kidnapping, and even murder.

Echoing themes from today's headlines, The Trial is a classic David-and-Goliath tale of a small-town lawyer fighting the incestuous relationship of a giant pharmaceutical company with the FDA. In this fast-moving legal thriller, Thompson exposes the corruption involving the drug industry, which, all too often, leads to the approval of new and very dangerous drugs in the United States.