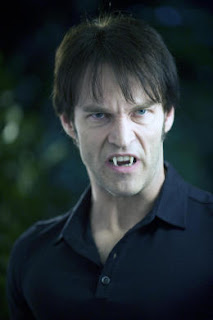 Sure, vampires still troll the night, feed on blood and keep secrets from all but the most remarkable of human beings.

But when the vampires of HBO rise again Sunday for a second helping of the horror romance True Blood, they will also find themselves mired in the more mundane realities of mortality.

They will fight with — and make up with — their girlfriends, highlight their hair and worry about ruining their favorite pumps.

It’s the price of revealing themselves to the world, or at least the fictional Louisiana town of Bon Temps, where the action is centered.

“I think the vampires are like humans in many ways,” True Blood executive producer Alan Ball said in a conference-call press conference last week. “There are a lot of law-abiding peaceful vampires … and then there are those who just want everything.”

And by everything, Ball means power, money and blood.

The new season of True Blood starts where the last one finished, with painted toenails on a dead body. From there the story traipses down the country road of sex, love and debauchery, all dished out HBO-style, which is to say rather explicitly.

Those familiar with the last season — or anyone who has read the source of the show, Charlaine Harris’ Sookie Stackhouse novels — knows that these vampires are hunky and human. They are friends, lovers and bosses.

They have dark secrets of blood sucked and lives lost. The best among them are trying to get in touch with their inner human. The worst are power-hungry and political, with an unmerciful sense of justice that includes the torture of prisoners for information.

As in last season, vampires have “come out of the closet” and are trying to blend in a new world as they face their fears and the fears of Bon Temps’ human inhabitants.

“One of the themes we explore is the difficulties of coexistence with people who are not like us,” Ball said. “I think that is incredibly timely because of all of the fears and anxieties that are projected on

The theme may not be an entirely new one for vampire stories, though True Blood updates the story line with themes about a vampire rights amendments and interspecies dating. In Season Two, it delves into story lines about the boundaries and bonds of faith, community and cult.

“It also does play on the questions of our concerns about sexuality and what is right, what is ethical and moral,” said Thomas J. Garza, chairman of the Slavic and Eurasian studies department at the University of Texas.

Scholars of vampire lore often say that each generation creates its own vampires, a reflection of society’s fears and values.

The ultimate vampire, Dracula, arrived on the scene in England in the 1890s, a time when immigration from the east was stirring the xenophobia of the natives, said Garza, who teaches a course on the vampire in Slavic cultures.

From Count Orlok of Nosferatu in 1922 to Edward Cullen of Twilight in 2008, he added, the stories arise at difficult times in history. The recent surge is no different, he said.

The origin of the stories may go back 3,000 years to tales in Asia, Garza said. In Europe, vampires took hold in about the 5th century and mingled with local folklore of regions ranging from what is now Turkey and Greece to the Balkans and Slavic parts of Europe.

Jennifer E. Sunseri, associate professor of classical and modern languages and literatures at Texas Tech University, distinguishes between the vampires of Slavic folklore and the vampire of the modern multiplex.

The olden-days vampire was often a scapegoat or used as an explanation for community problems such as illness.

They were also not sexy, Sunseri said. Remember Bram Stoker’s Dracula? That guy was holed up in the Transylvanian mountains with hairy palms, no tan and some very bad breath — or so the character Jonathan Harker tells us in the book.

In 21st-century America, the vampire is more a personal demon, Sunseri said. Unlike their folkloric ancestors, she said, they exude sex. They also live forever and never need Botox to keep the signs of aging at bay.

“Vampires are sexy,” Ball said. “They arose in our consciousness as metaphor for sex.”

True Blood is supposed to be scary, sexy and fun.

“It is a show about vampires,” Ball said. “It’s not meant to be taken that seriously.”