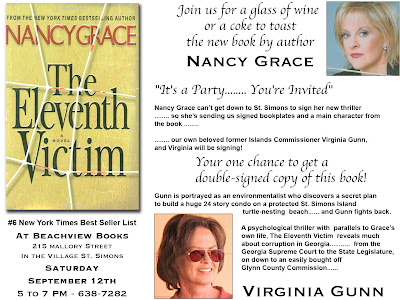 Commissioner Gunn is fictionalized and featured prominently in Nancy Grace’s best-selling new novel, The Eleventh Victim. Gunn is portrayed as an environmentalist who discovers a secret plan to allow a huge 24 story condo development on a protected St. Simons south end beach.

Grace’s book is a murder mystery whose story reveals a lot about corruption in the State of . There are a lot of autobiographical similarities between the main protagonist Hailey Dean, and the author, Nancy Grace. Many of the character's life experiences (such as the death of her fiancé from a violent and senseless crime) come right out of Nancy Grace's life.

Hailey Dean, motivated by the murder of her fiancé, becomes a criminal lawyer to "put the bad guys away" and perhaps lay to rest the psychological demons that have haunted her since then. These "demons" are the central theme of the story.

The secondary theme is corruption in . The Eleventh Victim details how bribery and the selling of political favors within the government works, and how laws and people are manipulated for personal gain.

There are multiple story lines; a Georgia Supreme Court Justice willing to set a serial killer free in exchange for becoming the state's next Governor, a group of eco-friendly guerillas on the coast who are trying to save a turtle nesting beach on St. Simons Island, a elite businessman who will do whatever it takes to convert those beaches into a multi-million dollar resort.

The behind the scene maneuverings stretch from Las Vegas to the Georgia Supreme Court to the Georgia legislature and on down to an easily bought-off Glynn County Commission.

The fictitious Virginia Gunn character is a native islander who lives alone on the beach with a herd of barking "wiener dogs". She resigned her chairmanship of the eight years earlier after a vote of no-confidence from the Board.

During the course of her crusade against the condo builders, she is brutally beaten twice, yet never looses her determination to keep up the fight.

Most readers will laugh at the dilemma of the sweating, overweight fictional Chair of the Glynn County Commission trying to defend his ineptitude to the developer’s front man and realizing he is about to pass a painful kidney stone. He can’t control it, and realizes he can’t to make it to the bathroom either. Whoa boy!

Warning to purists: Grace’s depiction of St. Simons leaves a bit to be desired. You will not recognize famous landmarks or streets. The band of eco-guerillas that gather around Virginia Gunn do not much resemble the Save the Beach organization that she led.

Once you get over that, the fictional plot to stop gross over-development can be enjoyed.

The real Virginia Gunn, who now lives outside of , enjoyed the book so much, she has decided to return to St. Simons briefly to sign copies of The Eleventh Victim for locals.

She’ll be bringing bookplates signed by Nancy Grace, who says about her, “Virginia Gunn and I have something huge in common.... we both have loved St. Simon's Island for so many, many years. I have visited the since I was only four years old, chugging along old highway 341 in our church bus, to the Methodist center at Epworth by the Sea. I know anyone who visits or lives here must feel the same wonderment as and I do! “

The Eleventh Victim has risen to the number 6 spot on both the New York Times and Publishers Weekly best seller lists.

Former Commissioner Virginia Gunn will be at Beachview Books, on St. Simons, Saturday September 12 from 5 to 7 p.m.. For more information call: 638-7282.