Larry Thompson Gets a Thrill Out of the Family Profession

By Melody McDonald Special to the Star-Telegram 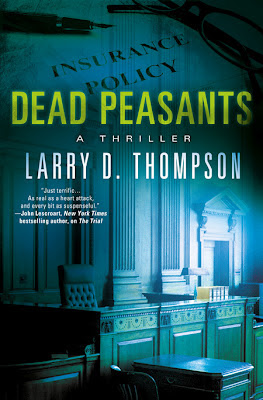 The Fort Worth Library and Barnes and Noble University Village will mark the occasion by co-hosting a book launch party Thursday at the downtown library, where Larry will talk about the role Fort Worth, his law practice and his late brother have had on his career as a suspense writer.

"My brother wanted to be a writer since he was 8 years old," Larry said. "The highlight of his day would be to throw a noun up against a verb and say, 'That's a good phrase I just wrote.' I could never match my brother for his writing ability, but I think I'm a better storyteller. I guess there is something in our gene pool somewhere."

Larry's decision to finally peck out a novel came late in life -- long after he had founded the law firm of Lorance and Thompson and tried hundreds of lawsuits, long after his four children were grown, and long after his big brother died of liver cancer in 1982.

"I said, 'What do I know?' I know about lawyers and courtrooms and medicine and doctors. Let's put all that together and see what I can come up with."

What he came up with on his first trip out was 2008's So Help Me God, a legal thriller that put the debate over abortion at the center of a courtroom battle with larger-than-life lawyers.

In a nod to his brother, Larry Thompson took a character who was left in a coma in Tommy's last book, Celebrity, and made him the main character in his first book. 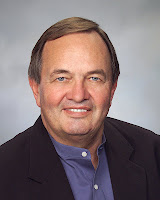 In the process, Larry also awoke his passion for fast-paced, suspenseful storytelling. So Help Me God was quickly followed by The Trial in 2011.

"Once I decided I would write a novel, I found I loved the creative process," Larry said. "I'm trying to turn out one book a year. Tommy was only 49 when he died and he still had a lot of good books to write. I figure I'm going to live until I'm 95 and write 20 more books."

The protagonist in Dead Peasants is Jack Bryant, a Beaumont attorney who, after winning an enormous wrongful-death civil suit, retires to Fort Worth. Bryant wants to be closer to his son J.D., an ex-marine who walks on at TCU and becomes a football star. When boredom sets in, Bryant sets up an RV on the city's north side to do pro bono work for the poor.

He winds up representing a widow who discovered that her husband's life insurance proceeds were made payable to the dead man's employer. Bryant sues to collect the benefits and suddenly finds himself in the middle of murder-for-hire serial killings.

Like all of his books, Thompson draws on his vast knowledge of the law and the courtroom to create colorful characters and spin a tale with twists at every turn of the page.

"It is great fun to invent characters and set them on a course and see where they go," Thompson said. "As my brother used to say, there is a little bit of me in every character I write."

In fact, readers may recognize a little bit of themselves in Thompson's characters. The lawyer-turned-author models them after people he knows -- including childhood friends from Fort Worth.

Sons of Fort Worth schoolteachers, brothers Larry and Tommy Thompson were born with literary genes.

Reading books and penning prose seemed to be part of their DNA. Both aspired to be writers.

But when Tommy realized his dream first and became a nationally acclaimed journalist and author, Larry deliberately changed paths, went to law school and became a prominent civil trial lawyer in Houston.

"I was the kid brother who did not want to follow in his brother's footsteps," said Larry, who is seven years younger. "I wanted to strike out on my own. I took a different route."

But as fate would have it, their destination was the same.

On Tuesday -- 30 years after the death of his beloved brother, who was best known for the true-crime book Blood and Money -- Larry Thompson's third legal thriller, Dead Peasants, hits the bookshelves (St. Martin's, $25.99).

Shannon and Thompson attended Arlington Heights High School together and are longtime friends.

"I had Joe Shannon with his real name in the book and my editor said, 'He's a public figure and we'll have to go through too much red tape,'" Thompson said. "People love to see their name in print."

Indeed, Shannon got a kick out of it.

"I took the book with me on a family vacation," Shannon said in a review for the novel. "I just finished it. I could hardly put it down."

Fort Worth journalist Mike Cochran, author of Texas vs. Davis, also had enthusiastic words for Dead Peasants: "Set in Fort Worth and skipping murderously across Texas, Houston attorney Larry Thompson has whipped out another legal thriller that will propel readers on a riveting ride in, out and around Cowtown, where the author grew up."

Even though Thompson now calls Houston home, Fort Worth still has a strong hold on him.

"I love Fort Worth," Thompson said. "Fort Worth is a town with character, and I wanted that character to come through in my novel. I can't say enough how fun it is to write about Fort Worth."

In fact, Thompson had such a great time writing Dead Peasants that he predicts it will be the first book in a series about Bryant. After all, a lot can be done with a character that constructs an office next to a beer joint on the north side and does legal work for free.

"You just don't know who is going to knock on the door with a problem to solve," Thompson says.

Thompson, who is in the middle of writing his fourth book, Blood Decision, has no intention of winding down his literary or his legal career anytime soon. At 72, he splits his time between the courthouse and his computer.

His big brother, he says, would have been proud.

"Tommy would have been delighted. I guess, in a way, I'm carrying on the family tradition."