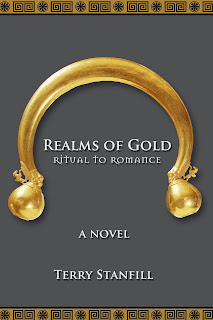 Planning already is underway to mark the 50th anniversaryof the assassination of President John F. Kennedy on Nov. 22, 2013. Commemorative events in Dallas and in churches across the country are being organized. TV host Bill O’Reilly is set to release a new book, “Killing Kennedy: The End of Camelot,” this fall, and a feature movie, “The Kennedy Detail,” is planned for release next fall.

“As people ponder the legacy of President Kennedy and his ‘Camelot,’ it’s a good time to revisit the original Camelot of King Arthur legend, and I have compelling new evidence about where it may have been located,” says art expert Terry Stanfill, author of Realms of Gold: Ritual to Romance (realmsofgoldthenovel.blogspot.com), a novel of ancient history and modern romance that posits her new theory about Camelot.

“The Arthurian legend is so ancient, and yet it has been one of the most enduring interests in Western civilization,” she says. “It’s exciting to think that after all of these centuries, we have a strong case for a real Camelot.”

Educated in Medieval history, Stanfill has traveled extensively through Asia and Europe, particularly France and Italy, and researched the art and artifacts. She offers this primer on King Arthur, including her own surprising theory about the true location of the original Camelot:

• The legend
Arthur as king was first mentioned in “The History of the Kings of Britain” by Geoffrey of Monmouth, 1100-1155. A generation later, Chrétien de Troyes, a French bard and poet, began to weave stories about King Arthur's court, introducing the characters Lancelot, Guinevere and Perceval. He was the first to mention Camelot, King Arthur’s home, describing it as "a place by a river, surrounded by forests and plains beyond."

• The reality
Toward the end of the Roman Empire, circa 450 AD, Arthur Riothamus, King of the Britons, was hired by the Romans to fight off invading Goths and Visigoths. There is documentation from multiple sources that Arthur spent a lot of time in Burgundy, France. He died after a battle near Bourges and was taken by his men to Avallon in France, a town that had existed for centuries. This is fact, not fiction.

• Avalon
While many people believe the mystical Avalon of Arthurian legend was in England, perhaps near Glastonbury, there is no record of a place called Avalon in that country.The Avallon region of France, however, has long existed. It was and still is known for its fruit trees and vines, much like the lush island of legend.

• Camelot
While many presume Camelot was in England, the extraordinary discovery in 2007 of the remains of an ancient community on Mont Lassois in France makes Stanfill wonder if this was actually the true Camelot. The community is near Avallon, and among the buildings unearthed there appear to be the remnants of a palace, including a great hall, where there is evidence of feasting.

“When Chrétien de Troyes wrote of Camelot, this place may have been held in the memory of the locals as a place where peace, prosperity and the good life held a long reign,” Stanfill says. “His vision was a nostalgic tribute to a distant, golden age of tranquility that was on this hilltop.”

Stage director Manfred Flynn Kuhnert, an Arthurian legend aficionado and teaching fellow at Harvard College, says Stanfill offers the most compelling evidence he’s heard for the historical existence of Camelot and its location in France.

“The citadel of Latisco on Mont Lassois -- a site of palatial buildings unprecedented in the Celtic world – is not far from Avallon,” Kuhnert says. “Arthur Riothamus’ time in Burgundy is documented, and we know that the first person to write about Arthur was the bard Chrétien, who lived in the area.

“This place is exactly as he described it: ‘on a hill, a place by a river, surrounded by forests, with plains beyond.’ Terry Stanfill may well have it right.”

Terry Stanfill holds a degree in English literature with a minor in medieval history. She is an Overseer of the Huntington Library in San Marino, Calif. An enthusiastic preservationist, she was decorated by the president of Italy with the Ordine al Merito, Cavaliere della Repubblica Italiana, and more recently as Commendatore, for her fundraising efforts for the restoration of San Pietro di Castello, the ancient cathedral of Venice. She is a former international representative for Christie’s auction house and former director of Norton Simon Museum in Pasadena, Calif. “Realms of Gold: Ritual to Romance” is her third novel. Her first two are “The Blood Remembers” and “A Tale of the Fortuny Gown.” Stanfill is married to Dennis Stanfill, former CEO of 20th Century Fox and MGM Studios.