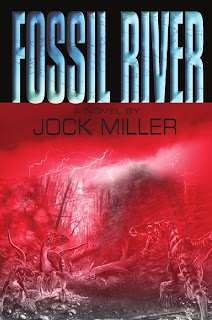 This pedal-to-the-metal speculative thriller revolves around the discovery of a highly territorial colony of predatory dinosaurs in Alaska that has survived undetected for millions of years.

The story begins in an America on the verge of collapse: The nation’s oil reserve is almost gone, and, within a matter of weeks, the country’s entire infrastructure could crumble. However, scientists have discovered the largest fossil fuel deposit in the world, within Alaska’s Noatak National Preserve, which could save the nation from imminent disaster. But there’s one major drawback: a large colony of vicious birdlike dinosaurs (classified as Deinonychus) that have lived in the secluded area for millennia. Zoologist Scott Chandler and his ex-girlfriend Kimberly Fulton, a pre-eminent paleontologist, are tasked by the president of the United States himself to help identify and somehow suppress the mysterious predators—– but an overzealous military presence turns the volatile situation into an all-out blood bath, as dozens of Marines enter the “lost world,” and none return alive. When Fulton’s wayward son and his girlfriend venture into the area, Chandler and Fulton are forced to attempt a desperate rescue.

The narrative features well-developed characters, a plausible and well-researched premise, vivid description and brisk pacing throughout. The only two significant criticisms are that the conclusion is somewhat predictable, and the overall concept isn’t particularly original; James Robert Smith’s The Flock (2006), for example, features a very similar setup. That said, readers who like intelligently written thrillers, à la Michael Crichton’s Jurassic Park (1990) and Frank Schätzing’s The Swarm (2006), will likely enjoy this pulse-pounding trip into the Alaskan wilderness.