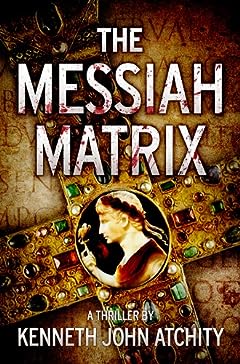 A renowned scholar-monsignor is killed in Rome while a Roman coin is recovered from a wreck off the coast of ancient Judea. It’s up to his young American protégé--a Jesuit priest--and a vivacious, brilliant archaeologist to connect these seemingly disparate events and unravel the tapestry that conceals in plain view the greatest mystery in the ecclesiastical world. Together they pursue their passion for truth—while fighting to control their passion for each other. What they uncover is an ancient Roman imperial stratagem so controversial the Curiafears it could undermine the very foundations of the Roman Catholic faith--much like the secrets emerging from the Vatican in today's news.

From the ancient port of Caesarea to Rome's legendary catacombs and the sacred caves of Cumae, this contemporary novel follows their exhilarating quest to uncover the truth about the historical existence of the real "Christian Savior."

Classical scholar and Yale Ph.D. Dr. Kenneth John Atchity is the only author alive today capable of creating this literary and historically-based spellbinder.

For more information on The Messiah Matrix, including location maps, blog and more please visit: www.messiahmatrix.com

Jasius?Who or what is it? All Google has to offer is a two-tailed butterfly or the ring finger. Say it again. Jasius. It has the sound of something strange, yet strangely familiar. Something or someone we all know, yet infinitely beyond our comprehension. Kenneth Atchity's The Messiah Matrix explores the mystery in a fast-paced, light-hearted novel that is at the same time profoundly disturbing.The story goes forward at three levels. At the top, a rousing twenty-first century adventure that moves from the wrecks littering the floor of the Mediterranean to the corridors of the Vatican. Below that, a carbon-dated epigraphic revisionist history of the first centuries BCE and CE. And, at the deepest level, a sympathetic, fair-minded rational re-examination of "the greatest story ever told." You may applaud, dispute, chortle, weep, but you will think about this book long after the final page.-Benedict and Nancy Freedman, authors Mrs. Mike, Sappho: The Tenth Muse, The Immortals

In a thriller that rivals anything Dan Brown ever wrote, The Messiah Matrix threatens to take all your beliefs and toss them into the wind. A priest is murdered in Rome. His assassin is also shot and killed while with another priest. A message was delivered. An artifact is found on the floor of the sea.A Jesuit questions his faith and the history of his Church.An archaeologist uncovers the find of a lifetime and loses it.

A connection between Christ and Augustus Caesar? The wise men following a star in 17 BC?Curiouser and curiouser! Although you know what they say about curiosity. The Monsignor searching for the ashes of Christ--which he was killed before explaining. Does the Holy See condone murder? Damn Skippy it does!

This book is amazing! The two main characters of Ryan and Emily are the perfect pair of detectives. Will they be more? You’ll have to read the book!Emily’s coin is vital to the history of Christianity in the world, but will they get it back? On the coin, Augustus was wearing a crown with twelve spikes.What’s up with that?

In this tale we have good guys, very bad guys, the Holy Mother Church, good priests and very, very bad priests and one red-headed archaeology professor who, along with one questioning Jesuit and some of his brothers, may be able to solve the conundrum that is The Messiah Matrix.