Check Out this Q & A with Ken Atchity on CMash Reads 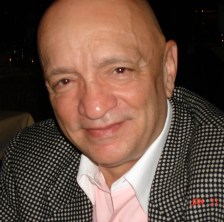 The author of The Messiah Matrix, Kenneth John Atchity, at the age of ten began instructions in the Latin language from a multi-lingual Jesuit mentor and went on to continue his study of Latin, and to begin Homeric Greek, and French at the Jesuit high school, Rockhurst, in Kansas City, Missouri. He won an Ignatian Scholarship to Georgetown University in Washington, D.C., where he graduated as an English/Classics major and won the University Honor Program’s prestigious Virgilian Academy Silver Medal for his nationally-tested knowledge of Virgil’s Aeneid.

At Georgetown, he added to his four years of high school Homeric Greek with studies of Attic and Koinaic Greek as well as further studies in Homer and four more years of Latin. He spent his junior year summer at King’s College, Cambridge.

He was professor of literature and classics at Occidental College in Los Angeles, 1970-87, served as chairman of the comparative literature department, and as Fulbright Professor to the University of Bologna. His academic career included books on Homer and Italian literature, and dozens of academic articles and reviews. During his years at Occidental, Atchity was a frequent columnist for The Los Angeles Times Book Review, where he reviewed the novels of Umberto Eco, Doris Lessing, Gabriel Garcia-Marquez, Carlos Fuentes, and many others.

In a second career Atchity represented writers of both fiction and nonfiction, accounting for numerous bestsellers and movies for both television and big screen. In the tradition of Dominick Dunne, Sidney Sheldon, and Steven Cannell he has drawn on his professional experience with storytelling to write The Messiah Matrix.

Connect with Ken at these sites:

Do you draw from personal experiences and/or current events?
As all novelists do, I draw from both. Oddly enough my novel unwittingly predicted the pope’s resignation and the election of an Argentine Jesuit. But it also reflects my adolescent experiences growing up Catholic and wondering if God would really send someone to hell for eating meat on Friday or stealing $5.00 worth of peas instead of $4.99 worth.

Do you start with the conclusion and plot in reverse or start from the beginning and see where the story line brings you?
I do both. I start wherever the sharpest image begins and work backwards or forwards accordingly. That’s the beauty of this computer age—you can go either way. Write the scene you feel like writing today, and put it wherever it’s supposed to go later.

Your routine when writing? Any idiosyncrasies?
Although I’m a morning person, I write any time of day I can steal an hour or two from my editing, managing, coaching and producing. On an ideal day, I write from five to seven a.m. Over the years I’ve taught myself to write anywhere, and particularly love writing on the plane. I use a stopwatch to make sure I get my two hours in every day.

Is writing your full time job? If not, may I ask what you do by day?
I’ve never written full time. I write when I have something to say or have a story to tell, which has, I admit, gotten to be more and more often. My day job is coaching other storytellers on how to get their stories to their maximum audiences in today’s challenging and changing world—and editing, managing, representing, and producing stories.

Who are some of your favorite authors?
Aside from my own clients, my favorite authors go back to Homer, Virgil, Dante, Shakespeare, Cervantes, Sterne, Wallace Stevens, Thomas Hardy, Melville, Garcia-Marquez, and Carlos Ruiz Zafón.
What are you reading now?
Preparatory to writing The Hong Kong Reversion, I’m rereading Ian Fleming’s wonderful James Bond books as well as James Patterson, and Viktor Frankl’s Man’s Search for Meaning.  I read all day, for joy, for research, and because my dayjob is helping storytellers find their audiences.

Are you working on your next novel? Can you tell us a little about it?
I’m currently working on AFI, Inc., the first in a series of memoirs, prior to completing The Hong Kong Reversion, a thriller set in Hong Kong.

Your novel will be a movie. Who would you cast?
I’d die to have Claire Danes as Emily Scelba.

Would you rather read or watch TV/movie?
Yes.

The Messiah Matrix by Kenneth John Atchity is a fast-paced contemporary thriller in which a young Jesuit priest becomes romantically entwined with a vivacious archaeologist as they pursue the hidden history that links Jesus Christ with Augustus Caesar. A year before it occurred, the novel predicted the resignation of the pope and the election of an Argentine Jesuit to succeed him. In a story that will leave readers breathless and hungry for more, Atchity weaves a compelling tale about the foundations of today’s Roman Catholic Church lying deep in the religious rituals of the ancient Roman Empire.
From the first page to the last The Messiah Matrix takes the reader on a riveting adventure from the ancient city of Caesarea in Israel to Rome’s labyrinthine catacombs and beyond, and provides gripping evidence for all those who have ever wondered about the historical existence of the Christian Savior. The Messiah Matrix is a tour de force of modern drama and intrigue, classical scholarship, and early church history that will change the way you understand the birth of Christianity.

The Messiah Matrix may prove to be one of the most controversial novels ever written. Graeco-Roman scholar, professor, and producer Dr. Atchity is perhaps the only author alive today capable of creating this ground-breaking work.