Santa Muerte, Book One of The Daniela Story by Lucina Stone FREE January 13 - 17!! 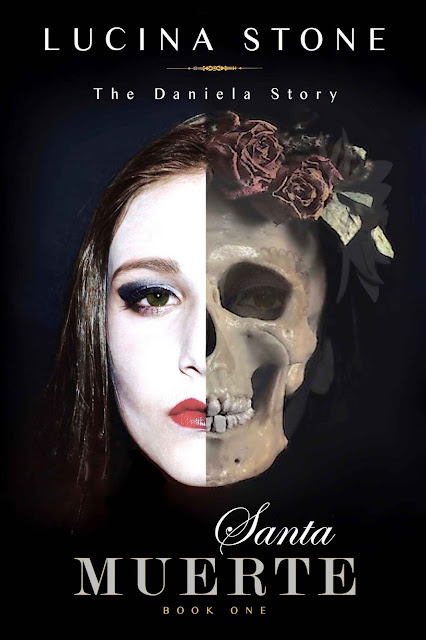 EMMA DELGADO WAS PACKING HER suitcase. It was her final night in her childhood home before moving from Mexico to the United States. Mother was not pleased with her recent choices or future plans, but they had come to an agreement. Emma would be released from her arranged marriage if she consummated with the man her mother had chosen. Why Mother would insist on Emma having sex with the guy was beyond her understanding. Perhaps her mother thought she was confused, and the one night would change her mind. Mother had been conjuring up strange requests since birth. Emma did her best to appease her, but there was no way she was getting out unscathed.

Emma no longer cared. She would get it over with and leave. It would be like ripping off a bandage or some other cliché—the sooner it was over, the better.

Emma had come out to her mother and refused the marriage last year. She was in love with Monica, her girlfriend since freshman year at Drew University. They wanted to get married, and there was nothing Mother could do about it.

The meaningless sex would allow Emma the freedom she always longed for, without her mother’s guilt hanging heavily in the shadows. Mother had promised this would be the last thing she ever asked of her.

It’s tradition. Your duty. What will your aunts think? This is part of our culture.

The statements rotated repeatedly on the conveyer belt of her mind. Maybe the distance—a whole different country—would free Emma, and help her move on from all these “traditions.”

Emma packed the last of her belongings—Tibetan prayer beads and the amethyst necklace Mother had given her for protection. She took a long look at her room and closed the door behind her.  She could hear her family outside in the large garden; they were whispering, and Emma could feel their anticipation.

This time of year, Merida was full of flowers. Lilies and gardenia and plumeria trees were in full bloom. The rainy season had ended and the air smelled sweet with the prospect of a new life within her grasp. Emma tried to focus on that as she walked outside to join the clan and meet the mystery man she had heard about since she was eight years old. Her thoughts were on Monica—who could never find out what Emma had to do to earn her freedom. Monica would never understand. Emma had given up on explaining her family dynamics and beliefs by sophomore year.
The garden was Emma’s favorite place. Her family grew a variety of lush plants that created a sense of harmony and connection with nature. It was her retreat. Emma could hear the bees busy pollinating all the blossoms in a sort of organized frenzy. Usually the beauty of the garden made it difficult for her eyes to decide what to savor first, but now all she saw was him. Emma’s mother greeted her and walked her over to the man, who was with three of Emma’s aunts. He was tall and attractive, with all the grace and charm of a movie star. He smiled softly at Emma. If Emma had been attracted to men, he would have been it. She felt her cheeks flush when he looked at her. His eyes were amber and warm. To make this task easier, Aunt Lola handed her a glass of Xtabentun, a Mayan love potion. Emma declined it. She wouldn’t need it.

“What time is your flight?” he asked. The tone of his voice was smooth and soothing, like honey on a spoon dipped in hot tea.
He smelled delectable, triggering a flood of pheromones as he moved closer. His voice made Emma weak at the knees. She cleared her throat. “Uh, it’s at 7:00 a.m. tomorrow.” Emma looked down at her hands. She felt her stomach flutter.

“Good. That gives us just enough time.” He arched his eyebrow and stared at her. He extended his hand, and she readily took it. He escorted her to the casita. The small house was set up for their privacy. Emma’s family took the hint and left them alone, retreating eagerly to the big house to chat privately and imagine their own version of what was to come.

Emma could hear her heart pound in her ears as he closed the door behind them. She had never been with a man before; never had the desire to. But something about this man provoked all manner of lust. Emma felt deeply ashamed to be unfaithful to her girlfriend. Before she met him, it was just an act to get through. It was her duty. It was to cleanse her future of familial guilt. But now, with the way he was staring at her….
Obligations are not supposed to be fun. At least, Emma had thought that was the rule up to this point.

EMMA SAT IN ROW 37, seat F, in the 747, grateful no one was next to her. Every few minutes, she had to shift in her seat. Her body was sore; everything hurt. She didn’t know whether to laugh or scream. Her world was upside down; she had spent the entire night making love to a man she would never see again.

Now, she had to face Monica. Emma decided she needed to tell her.

“Damn it, Mother!” she hissed to herself. This was exactly what her mother wanted.