Story Merchant Books is proud to be publishing MaryAnn and Joseph Anselmo with Lisa Cerasoli’s Through Fire and Rain. Look for it in the next week—an inspiring true story of a couple who survived and triumphed over four huge life-changing catastrophes with their love and spirit intact and thriving. 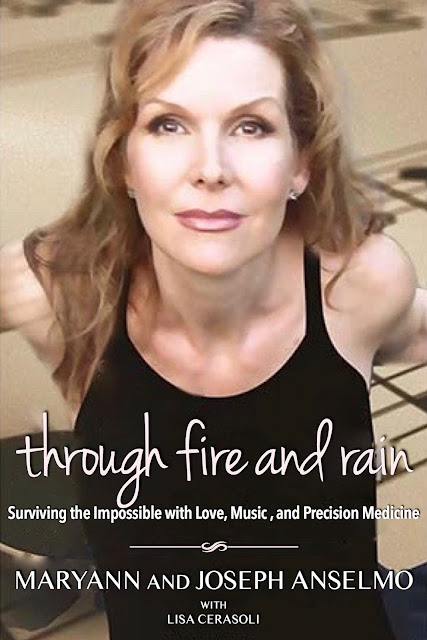 IN 2012, MARYANN ANSELMO WAS at the height of her career, headlining at Chico’s House of Jazz—the premiere venue in New Jersey for jazz artists. It was a sold-out show. The love of her life and husband, Joe, was by her side when she brought the house down. Her dreams were becoming a reality. Two days later she lost everything including the will to live when her son Dustin died unexpectedly.

“I’ve never thought of myself as a strong person…. After all, I’m just a jazz singer.”
MARYANN

A month later, MaryAnn and her father, Artie, suffered a devastating car accident. Dad was going to be okay, but she shattered dozens of bones, and had a string of strokes she suffered while in a coma. This ultimately left her without the use of her left vocal cord.

“My girl had a string of strokes. She was in a coma for weeks. I believed in God, I trusted Him, but we had just recovered from the Crash of 2008, then Dustin died, and now this. It’s too much. She doesn’t deserve this. No one does.”
JOE

With Joe’s love and constant support, MaryAnn worked hard to recover, even starting from scratch with her longtime vocal coach. She was determined to sing again. Then in mid-November of 2013, she was given eighteen months to live, diagnosed with a high-grade glioblastoma—a later stage brain tumor.

“Everything happened so fast—the diagnosis, the surgery. chemo and radiation. Joe kept saying, ‘It’s going to be fine, Mare, it’s going to be fine.’ And I believed him. Even when we had to stop the chemo because it was killing me, I knew I’d be okay.”
MARYANN

Joe did not know it was going to be okay, but he needed MaryAnn to feel secure, to feel loved, to have faith. Joe, for the second time in less than two years, left a job he had built from the ground up since the crash, and made finding a way to save his wife his life’s mission. He called all over the world—no doctor too far, no medical procedure out of reach. What Joe discovered was a new type of procedure called genomic sequencing. It fell under the category of Precision Medicine, and it was going to change their lives; he felt it.

Through Fire and Rain is a story of deep loss and salvation found through love, prayer, and faith in the future of medicine. They had made it through the fire. They had survived so much. This was just a little rain…. Joe Anselmo believed that, and his wife, MaryAnn was convinced of one thing: Joe’s love for her was without boundaries. She had seen this kind of love before in her parents. Her dreams of becoming a world-renowned jazz singer was still “in the works.” For decades it had been, but she had found something perfect in this imperfect world—the love of a great man—and this is what would save her life.

***
“…In 2013, I was diagnosed with something I couldn’t even pronounce—a high grade glioblastoma multiforme. The prognosis was 18 to 24 months. Like I said, I don’t believe in self pity, but I do believe in miracles…. For I am still here.

I went through surgery and radiation like most cancer patients, but it nearly killed me. I had no other options until my tissue was genetically sequenced and a mutation found in melanoma patients was discovered in my brain. Joe researched and I got into a clinical trial for this mutation, and 2 ½ years later I am thrilled to say that I am tumor free!

Your body and brain can take a lot. Fight through this and you can fight through anything. Don’t ever give up! For there is hope.

With the grace of God and the power of science you will get through this. The future is here!”
***

Joe and MaryAnn don’t believe in coincidences; they believe in the power of God and Precision Medicine. That is why they’re sharing their story with the world. They believe this happened to MaryAnn so that they can create awareness, bring hope, change they way the word “cancer” is perceived, and open up minds to new possibilities.

Shortly after Dustin’s untimely death in 2012, Joe and MaryAnn created The Bungalow Foundation. They created this to initially help people with depression through music and art, but then expanded it to become a public charity that funds bio-medical Precision Medicine Initiatives by way of grants to post-doctoral and clinical research fellows working with academic, medical or research institutions. This is their mission.

Through Fire and Rain, their memoir of impossible loss and deep faith is a story for all people from every walk of life. Just like cancer, their story does not discriminate. Unlike cancer, they will never be defeated. Their purpose is to share their story with the world in the hopes that more people see the possibilities in Precision Medicine: Believe that the future is now!