Silence Her by Douglas Fefterly Review

Silence Her by Douglas Fetterly 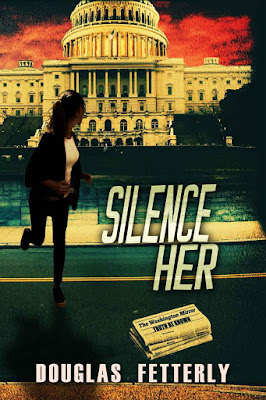 Exposes are not something foreign to reporter Lishan Amir as her goal is to take down Senator Libby and his cohort Jack Conner wanting to take down not only these two but anyone attached to them too. Dealing with her boss, executive editor Jerry Hanson the roadblocks, danger, threats she faces will make you wonder why she persisted when everyone around her just wanted to permanently Silence Her. Lishan is brash, hardnosed and will stop at nothing to take down Jack Conner and his company. False labeling on products is at the heart of this novel as we learn much about the FDA who they are really concerned about protecting and why one man was able to have products so readily available to the public even though some proved deadly.

Kickback, fraud, toxic fillers and empty calories are just part of what Conner delivers to the unsuspecting public and what we as consumers need to be more vigilant about reading labels and understanding that there are different names for trans fats and other harmful ingredients in our foods. When Conner learns more about Lishan it becomes an all out war. With the aid of her friend Erik she learns more as Lishan finds herself in the presence of Conner, Libby and the FDA commissioner and Nathaniel Ferrali, the U.S. Attorney for the District of Columbia plus her boss Jerry Hanson all at the same party yet Lishan tried to make herself inconspicuous. Saved by her friend JoJO a scientist friend with the FDA and performer at night she has him and several other allies that will work to help her uncover what she hopes will bring Conner and his team down. Plus a strong support in Howard Perkins.

Dr. Arthur Schuler is the FDA commissioner who spoke the audience present at this gathering promising and stating that he ensured public safety: FDA’s Determination of Obesity Relative to Artificial Sweeteners and the questions focused on a specific theme about the correlation between artificial sweeteners and the rise of obesity in the United States and the impact of Aspartame-like sweetener Connulose that Conner foods introduced. You can hear the discussion and the arguments on pages 18-21. Lishan was then attacked and saved by someone named Osiris while walking to her officer. The author explains why the FDA in this case seems to be skirting around protecting the public and is more concerned with those in industry as Lishan’s life is in danger and she is attacked many times and the people she thinks she can trust are not what they appear to be.

She is relentless and won’t stop at anything and her liaisons with many men that she encounters prove at times to be dangerous and wrong choices. Her impulsiveness gets her in trouble at work and her confrontational attitude brings her to the attention of the higher ups at the paper causing them to delve into her past.

JoJo is a molecular scientist and his input and knowledge are invaluable as you come to know him better. People risking their lives for Lishan are many but even so at times she seems to take them fore granted. Labeling on foods can be misleading and the FDA mainly CFSAN allows mislabeling. Two cases sited by the author in this novel deal with MSG which causes from personal experience I know migraines and headaches and producers of foods are allowed to put a zero trans fats on the front of the package, when in fact as you will learn when delving deeper into this novel and what is present, the Principal Display Panel, with its net quantity of contents and ingredients indicates the presence of HYBROGENATED OILS aka/TRANS FATS! The speaker continues with quotes from their own FDA documents and one from a budget file. Dealing with the front labeling of a product few people check and should check the nutritional facts label on the information panel of foods on the back side of the product. However, this person claims that the FDA is charged with ensuring honesty and truth in the labeling it supports and mandates that the transgressions he mentioned need to be addressed because the health and welfare of the public is at stake. On pages 124-128 the author reveals more information about how the company is concerned with stockholders as a PI named Beck is speaking to Lishan and how the commissioner of the agency and the faction of the Agency sides with what some call good ol boys. More cases are sited about the FDA more reviews and Conner Foods seems the most likely culprit as products are put on the market and toxic substances are present and people get deathly ill or die and Conner claims that’s not true. Then Lishan receives a box of cupcakes and one of the people in the newsroom’s daughter takes one and winds up deathly ill and might not survive. Guilt wears at Lishan as she tells her story to her Aunt Niesha who has some powerful connections and realizing that the cupcakes were poisoned and probably sent by some on Conner’s payroll if not him.

Every step of the way Lishan meets and has to overcome many obstacles. Dealing with someone named Raphael she falls into his trap and his main reason for wanting to see her is revenge for how she treated him in the past. Erik seems to have found someone else and Lishan falls apart when the PI working to help her is killed and then she contacts one of Conner’s henchman and he winds up the same way when she’s supposed to meet with him.

Going undercover, disguises, putting people in danger and changing her appearance, Lishan and her team her aunt, Maya and at times Erik hope to find the credible documentation and proof to take down this powerful man. But, wandering the streets, not being careful about a cab she went into, Lishan might find herself to be another victim.

The cafeteria at Factory 17 was included in experimental fat used in the cafeteria. Conner Foods’ factories decided to test the fats by using employees as subjects and some get sick others died. Conner could care less. Howard Wiggins is her source and stating that someone like Conner who’s considered an industrial giant states that its new drug reduces blood pressure and it does that’s enough to satisfy at least the primary entry requirement onto the list of approved drugs. Side effects get less notice and press and at a minimum and this is scary as most people forget to check out these side effects before even considering taking certain drugs can be a fatal mistake. Some cause heart attacks, others blood clots or worse and many of these drugs pass muster but the client is not the public it’s the industry. But, Lishan is relentless and finds someone named Fatima to help her and talk about Factory 17 but will she and what if anything will she learn that might help her? Mazzini is someone she contacts who is close to Conner but just talking to her seals his fate. Conner has eyes all over. Mazzini is a risk but her aunt wanted him alive and things get even more out of control as Lishan becomes more of a target. Maya and her aunt Niesha are her two support systems as Maya’s office was in the United States Attorney’s office building and her title was Criminal Justice Chief her aunt was even more powerful. A visit to interview a prisoner named Alan Frazier is enlightening and the ending just might end it all for Lishan as she is held captive by someone working for Conner and the end result could mean her life and the end of the case. When the final headline comes out what will it read: Conner is arrested and charged or Lishan is another victim? Who’s straight and whose paid off and who wins at the end? A novel that will make readers think twice before trying foods that are mislabeled, foods with sugars that have pen names other than sugar, trans fats with false names and realize that the FDA approval needs to really target protecting consumers.

A young reporter that puts it all on the line and risks the lives of so many to make a point and take down a giant in industry that seems to be so far above the law that he might skate. Lishan is tough, outspoken, takes risks, impulsive but in the end will this do her in. A ending you won’t see coming and a young girl that is outspoken, passionate but most others just want to take her down for good and SILENCE HER! Consumer beware! Read your labels and know what goes into your body as author Douglas Fetterly succeeds in giving readers much more than food for thought!