The Meg Review - GET OUT OF THE WATER 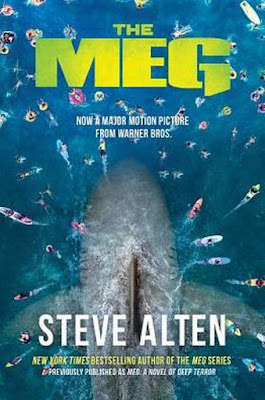 I learned about this because of all the hype of the movie release in summer of 2018 starring Jason Statham and Li Bingbing. When I watched the movie, I really enjoyed it! I love a good shark film, probably because my husband is terrified of the ocean and sharks, so I suppose that makes sharks my new best friend! When I learned this was based on a book of the same name, I was pumped because I love delving into stories and getting as much detail as possible which I know movies can never do in their limited time frame. Let’s take a swim into the book!

Jonas was working with the United States Navy to try and confirm the existence of the megalodon when they ventured into the Mariana Trench in 1997. During this expedition, the Meg surfaces and attacks them so Jonas tries to save everyone by surfacing the vessel, but a few are killed due to this. When explaining to the Navy what he saw, they brushed it off as the ramblings of a madman which causes Jonas to become obsessed for years with proving the existence of the megalodon. This causes tension in his marriage which leads to his wife having an affair with his best friend.

Jonas is approached by Masao Tanaka to help venture into the Mariana Trench in order to retrieve one of their lost submarines, which Jonas immediately accepts as an opportunity to find the Meg and prove he wasn’t crazy. Jonas and Tanaka’s son , DJ, both venture into the trench when DJ is attacked and killed by a male megalodon. As Jonas looks on in horror, a larger megalodon - the Meg - rises from the depths, attacks the male megalodon (#Yasqueen, you don’t need a man boo), and surfaces out of the mariana trench into open waters. Well, it sounds like Jonas can finally prove he wasn’t crazy - as long as he doesn’t get eaten first.

Thus begins the wild shark chase! They hunt and search the ocean as the Meg leaves behind a trail of death. They shoot the Meg with a tranquilizer to try and capture her alive until she wakes up and attacks several bystanders. Jonas drives his submersible into her throat and stomach and cuts through her stomach lining, while inside her, and cuts out the heart. Who else is volunteering to be in the Meg’s stomach? With the Meg finally dead and gone, everyone can finally breathe a sigh of relief - or can they?

Here are the main differences between the book and the movie:

Do you remember the scene in the movie with the T. Rex? Probably not because it was not in the movie at all. The opening sequence of the book is in the late Cretaceous Period, when a T. Rex pursues a herd of dinosaurs and ends up waist deep in the ocean. While there, all of a sudden a huge chunk of his gut is bitten into which confuses the T. Rex until the Meg surfaces and devours the rest of him. Really now - it was no contest. I wish I could have seen the T. Rex swatting his baby arms at the Meg.

The Meg is White in the Book

While in the movie they portrayed the Meg as a giant Great White Shark, in the book the Meg has a bio-luminescent white hide. This is because there is no sunlight in the trench where it has been residing, which only makes it that more menacing looking. Imagine a giant 60 foot long shark all white with charcoal black eyes - I think I just peed my pants a little. The meg also only hunts and surfaces at night in the book due to it’s eye sensitivity to sunlight. This occurs only till the end when it is blinded - then it’s fair game to hunt day or night.

Male and Female Meg Smack Down in Trench

In the movie, there is a scene when they finally killed off the megalodon shark and suspend it on the back of the boat - until the female Meg jumps out of the water, twice as large as the one killed, and bites a huge chunk out of the dead male megalodon. While that was a terrifying site - we actually get to read about the female Meg attacking the male megalodon in the trench right in front of Jonas! I wouldn’t have wanted to get in the middle of that fight. The female Meg being twice the size of the male, not only tears him apart, she actually uses him as a warm bloody shield to escape the trench as it protects her from the extremely cold cloudy barrier that kept her trapped down there all along. Yikes!

In the movie, Jonas is rescuing his ex-wife and her crew from their expedition into the trench. In the book however, Jonas is still married (till death do us part right), even though he does discover his wife is having an affair. She is a popular news reporter and when news of the terrifying Meg surfaces, she decides to go into a shark cage in order to capture videos of the Meg giving birth underwater - read my review on Jaws to see how well it went for Hooper when he did the same. The Meg decides she looks like a tasty snack and attacks the shark cage, swallowing it whole thus killing off Jonas’ wife.

This is the biggest difference from the movie and the book. While in the movie, she is just a lethal shark with a giant destructive appetite, in the book she is actually pregnant and gives birth to 3 megalodon pups. This just takes the book into a whole new level of anxiety because it’s bad enough hunting down one giant 60 foot long shark, but now they have to hunt down 4! While in the end they managed to kill 2 of the pups and the mom… 1 pup was not killed and ends up being the main character in the next book, the Trench. Maybe the movie will mimic this for a sequel due to the success of the movie.

From the beginning of the book to the end, I was on the edge of my seat wondering how things could possibly get worse until things start to get worse. If a shark could be a villain, I don’t think there is a better one than the Meg herself. She is menacing, terrifying, and will mow down anyone in her way. Even when you notice the characters making dumb decisions by getting in the water, you are rooting for the Meg to show them who’s boss! I loved when they let one of her pups live to set-up for a sequel because I know I definitely needed more megalodons in my life. I also think they did make the Meg seem truly terrifying, at least for me. With it being 60 feet long and albino white, I could only imagine how terrifying that looks charging at you in the water. I actually had nightmares for a while about being chased by the Meg. I won’t be exploring any underwater trenches EVER just in case the Meg really is waiting down there for a moment to shine.

I would have loved to give this book a 10 but there are a few flaws in the book. The way the Meg escaped the trench, in my opinion, was just way too easy. They made it seem like they have been stuck down there for thousands of years but she just randomly ate the right male megalodon that just so happened to cocoon her enough to escape the trench? I am sorry but I’m not buying it. I also didn’t much care for the drama with Jonas and his wife because I really didn’t think it added anything to the story and just set us up to dislike her so when she was eaten, I really wasn’t all that bothered by it. Lastly, I think this is definitely a rip off of it’s inspiration movie: Jaws. The shark attacks, the shark cage, the cheating wife - it just felt like things I read before. Even though

The Meg managed to use those same features and make it better, it almost feels like I am reading Jaws 2: Big Daddy.

With that said, I still love this book and would reread it again. It was a really fun and exciting read and they managed to get us to root for the Meg and Jonas at the same time. Maybe if they work out their differences, they could be friends? Even though I felt like this copied Jaws, I still think they did it in a much more entertaining way. For those that read my review on Jaws - you know how I feel on that one. I think The Meg is definitely the best shark book I have ever read. I would recommend this to fellow shark lovers or those looking for an ocean thrill!

For those ready to take a Meg sized bite out of this tale, this is available for purchase on

Amazon in Paperback or via Kindle