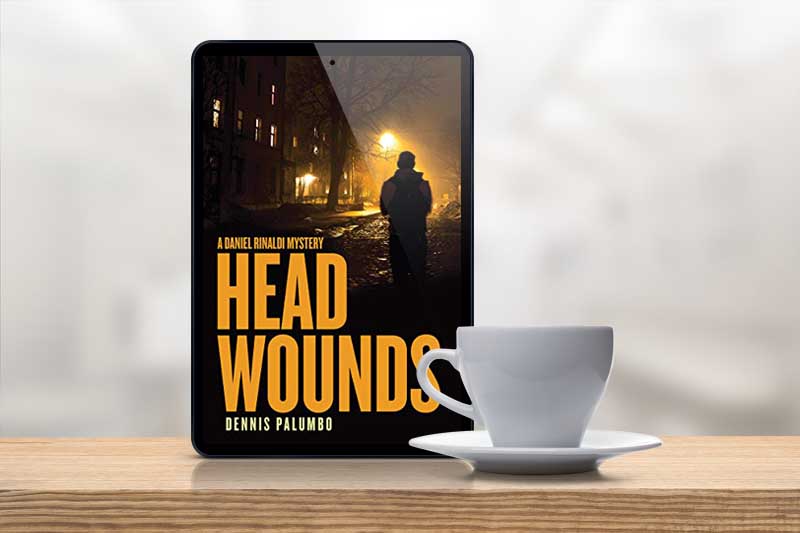 HEAD WOUNDS is the most recent entry in the action-filled Dr. Daniel Rinaldi thriller series by Dennis Palumbo. Dr. Rinaldi is a Pittsburgh-based psychologist and police consultant with a few rough edges and a remorseless, deranged enemy.

The combination is an absolute page-turner.

Dan Rinaldi lost his wife Barbara 12 years ago in an unsolved mugging gone bad. As he reads a recently obtained dossier on the crime, a bullet smashes his living room window.

Outside, a gun-toting neighbor is angry and drunk. When the police arrive, the wife admits to having told her husband in a fit of pique that she’s having an affair with Dan.

She’s found dead not long after.

Brilliant but unstable, Sebastian Maddox was obsessed with Barbara in college. Just released from prison for an unrelated crime, he wants to punish Dan for “stealing” Barbara by torturing Dan’s nearest and dearest before finally killing Dan in Hannibal Lector-worthy fashion.

A terrifying villain with an easily understood motive who had more than a decade to grow progressively more delusional and macabre, Maddox taps into Dan’s phone, laptop, and car GPS. Remote access to Dan’s digital devices gives Maddox personal details about his victims, which he puts to cunning and horrific use.

The two men play a heart-pounding scavenger hunt across Pittsburgh. Maddox meters out clues as to who the next victim will be and Dan races against time to try and save them. Warned by Maddox that more innocents will die if the police are involved, Dan is aided only by a female FBI agent (and soon-to-be love interest) and a retired FBI profiler. On the run from Maddox’s surveillance and exhausted from the endless tension, the trio nonetheless manage to dig up pivotal background material on the killer.

The entire book is written from Dan’s point of view and we’re in this with him every step of the way. We like his grit and the fact that he’s not some academic lightweight you can knock over with a feather. A former boxer with a bad temper and mean right hook, Rinaldi is a true son of Pittsburgh. A medical professional but not too polished, not too far from his blue collar roots.

The last half of the book is a speeding train. The non-stop pace, brash characters, and roller coaster events have a cinematic quality. I was reminded of the Lethal Weapon movies as well as Speed, The Silence of the Lambs and Harrison Ford’s The Fugitive.

It’s no surprise, then, to find out that author Dennis Palumbo is not only a practicing psychotherapist, but also a former screenwriter. His credits include the feature film My Favorite Year, which starred Peter O’Toole and has been one of my Top 10 favorite movies since forever.

The next Dr. Daniel Rinaldi book, PANIC ATTACK, is out next month.

Your heartrate will have slowed by then.