Now Available in Hardcover! Read about Melissa Bunnen's Incredible Journey from Banking To Baking in her hit memoir from Story Merchant Books. 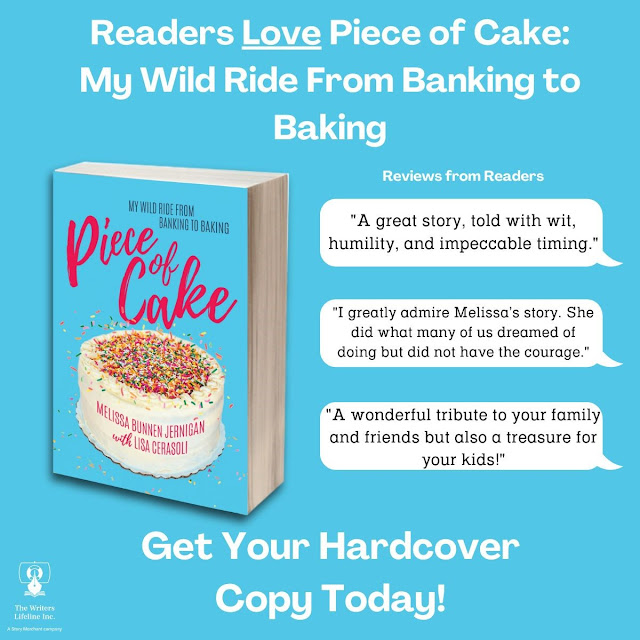 “Let’s bake and deliver cakes!” That was their big, moneymaking idea, though neither Melissa nor Helen, two fresh-faced twenty-somethings, had ever baked a cake. Next up, they picked the location—Melissa’s rinky-dink condo kitchen. Then, they swiped three recipes from family and friends, put $250 into the company kitty, and made their first investment: 250 plastic cake knives with Piece of Cake stamped on them.That was 1986.A decade later, POC, The Ward, World Headquarters, or the Pokey—whichever moniker you prefer—was pulling in seven figures annually. Over three decades later, they have locations all over Atlanta, including Hartsfield-Jackson Atlanta International Airport.

I was a liberal-arts major. You won’t find my business philosophy being taught at Harvard Business School, onlineMBA.com, or any institution in between. But you will find it here.

This is a story of starting a company on pocket change, of working twenty-hour days with no days off in sight, of losing my home to sacks of sugar and flour and ovens galore. It’s a story about cakes cooling atop lampshades, about nervous breakdowns, wandering pot dealers, babies, puppies, Cakers and bakers. It’s a story about the original housewives of Atlanta (they were working for me!) and the homeless, too; it’s about a car called The Bomb, and a location called Pamland. Piece of Cake is a place where autonomy ruled and that was the only rule.From Corporate America to cake batter, Piece of Cake: My Recipe for Success is a career manual for folks who know little about business, a cookbook for those who’d never thought about baking, and a what-are-you-waiting-for guide to pursuing your dreams.Seriously, what are you waiting for?This is the story of doing it my way