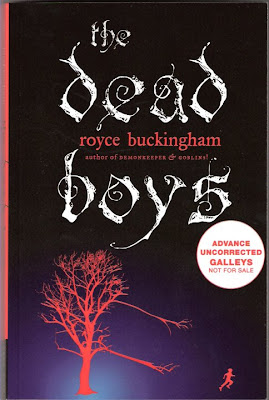 THE DEAD BOYS
This new thriller adds a unique villain--a tree--the roster of deadly supernatural foes. This particular tree has been mutated by nuclear waste from a nearby plant and has learned that sucking the life from 12-year-old boys is an efficient and tasty way to enhance its energy reserves. When Teddy and his mom move to an eastern Washington desert town, Teddy sets out to find new friends. He meets several boys who seem to be living in past decades, and he soon learns that they died many years ago. Worse, Teddy realizes that he's the next intended victim--but he falls for the tree's clever efforts to lure him into its clutching branches anyway. Buckingham keeps readers' pulses pounding as Teddy uses his courage and wits to escape. He depicts the boys with dialogue and clothing appropriate to their decades of origin, a device that works well to keep the story on the edge of believability. Teddy's character may appeal to many young readers; he feels plenty of fear but has defiant courage, too. An inventive premise that yields solid supernatural suspense. (Horror. 8-12)