The Dead Boys by Royce Buckingham 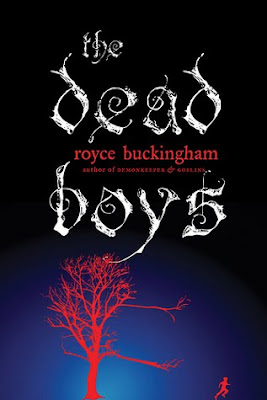 When Teddy Matthews moves with his mother to the desert town of Richland, Washington, he is not overly thrilled. He's left his friends and school behind and has moved into a new home where he'll have to start anew.

Upon his mother's bickering that he cannot remain indoors and must venture out to make new friends - he finds himself drawn to the giant sycamore tree in the yard of the abandoned house next door. A tree that has been mutated by nuclear waste - which in turn has taken a life of its own. This tree is like no other, for it feeds on the life energy of boys that it ensnares with its living roots. Teddy, at first, doesn't understand why he is drawn to the tree or why every time he meets a new boy in the neighborhood they somehow disappear - right before his eyes. Something is terribly wrong with Richland and he quickly learns that what's wrong is the tree - a tree that has its sights on its next victim.

This book was so deliciously creepy. I actually started reading it right before bedtime and ended up having to put it down and wait till the following morning to pick it back up. I found myself caught up in the mystery of the tree, the dead boys, and Teddy's fight for his life. He was a great character - brave, strong, one who respected his mother, and although there is a slight altercation of breaking and entering, an all around good boy. When Teddy crosses over into a dream-like world where the tree is supreme and above all - I was literally sitting at the edge of my seat. I felt his anxiety, his dread and his fears.

Mr. Buckingham positively delivers a frightening tale with good ambiance and lots of creepy moments, mysterious shadows, creaky windows and menacing elements that make this a successfully atmospheric read. It will definitely appeal to reluctant readers with its fast pace and chill factor. This is a great read for young and old alike that like a good spook before bedtime.