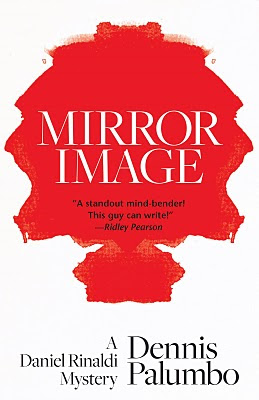 An upbeat setting, convincing characters and a plot that has one on the edge of one’s seat from page one—what more could a reader ask for in a crime novel? Once more, established mystery writer Dennis Palumbo has pulled off a fine fast-paced whodunnit that has one yearning for more. Set in Pittsburgh, with the backdrop of the “old Appalachian Hills, sloping away before spreading urban tendrils, looking as pristine and timeless as when the first settlers came over four hundred years ago”, the novel has such tangible atmosphere that the reader is locked into the plot by Palumbo’s versatile writing, which changes from poetic description to slick dialogue in the blink of an eye.

The characters range from the psychotic (with part of the novel being set in a psychiatric institution, which has its fair share of scary and battle-scarred inmates) to the professional (though the latter seem, at times, not to be too far off the former…). Palumbo’s own background as a psychotherapist enables him to imbue the lead character with authenticity and compassion towards the emotionally maimed and much undervalued social misfits.

Dr. Daniel Rinaldi is a clinical psychologist who specializes in treating victims of violent crime, to which he himself has also, ironically enough, been subject, with his wife being shot in a mugging in front of his very eyes. So, in a way, he also has some emotional baggage with which to contend. Not only that, but he’s also at loggerheads with Dr. Brooks Riley, Chief Psychiatrist at Ten Oaks, the most successful private psychiatric facility in the state of Pennsylvania, who’s determined to see to it that he gets Rinaldi’s license revoked.

When a patient of Rinaldi’s opts for dressing just like him, and gets viciously stabbed to death just outside the doc’s offices, all hell breaks loose. Tracking down the suspect, naturally, forms the major impetus of the plot, though there are loads of characters whose interrelationships tend at times to be of the rockiest kind, but at times reflect what true friendship is all about. The professional details regarding post-traumatic stress disorder which are neatly woven into the plot are fascinating. The characters are well-rounded and credible, with a fair amount of attraction between the sexes adding extra spice to the unfolding drama.

One cannot doubt that Palumbo has hands-on experience of the police and court proceedings which are so integral to the plot. His mystery stories have appeared in the past in Ellery Queen’s Mystery Magazine, The Strand Magazine and Written By, among other eminent journals. Mirror Image should make a great read for anyone interested in the crime genre, as long as you are open-minded enough not to mind the occasional cussing which goes with the territory.