JFK Requested Bodyguards to Back Off

Days before he was assassinated in Dallas, John F. Kennedy asked his secret service agents to give him space to campaign. 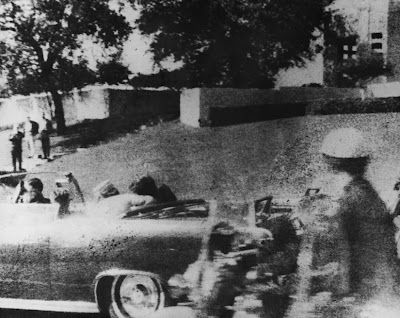 Four days before the fateful 1963 motorcade in Dallas when John F. Kennedy was fatally shot in the head, the young president had requested that his secret service agents give him some space.

"President Kennedy made a decision, and he politely told everybody, 'You know, we're starting the campaign now, and the people are my asset,'" said agent Jerry Blaine. "And so, we all of a sudden understood. It left a firm command to stay off the back of the car."

Be sure to tune into "The Kennedy Detail" airing Nov. 22 at 9 p.m. ET/PT on the Discovery Channel.

Blaine's revelations, as well as those from JFK's secret service agents in a forthcoming book, "The Kennedy Detail" and in a series of interviews with the Discovery Channel, reveal how challenging this charismatic president could be to protect and how shaken his murder left those whose job it was to keep him safe.

They were well trained and extraordinarily professional. They were dedicated to the President and especially to the honor of the presidency. Most of all, the Secret Service agents assigned to protect John F. Kennedy were stoic and silent.

They did not talk about their feelings for JFK. And they did not discuss their emotions about his death -- not with each other and not to the world -- until now.

Forty-seven years after the 35th president was fatally shot on Nov. 22, 1963, his bodyguards are sharing their memories about a charismatic man, his glamorous family, and a tragic ending.

Their words offer a new window into an event that transformed not just the nation, but also the men who were supposed to keep him safe.

Investigation Discovery: Explore video, follow the timeline and take a quiz about the JFK assassination.

What emerges from the interviews is a deep sense of grief and remorse. For their jobs and their country, the agents sacrificed sleep, personal freedoms, and time with their families in order to protect the lives of others. They became a tightly knit group. As they reunite with each other and recount their memories of the assassination, many of them unleash tears.

"It was an assault on our country, on every single thing that we stand for," said agent Toby Chandler, who was giving a speech to agents-in-training when the news came in from Dallas. "It was a thing that just must not be allowed to happen. And we were supposed to prevent it. And we failed."

"In our work, and in military work and things like that, you either get the job done or you don't," he continued. "There are very few excuses. You can always say 'Well, you know, it would have been a nice picnic if it didn't rain, but it rained.' And it rained on us. And so we lost a symbol of our country."

Compared to the presidents before him, JFK was a challenge to protect, especially in a motorcade, said agent Jerry Blaine. Eisenhower kept to himself and traveled in a closed-top car, Blaine explained, making him easy to cover.

But Kennedy was charismatic. He wanted to stand up in an open-top car and wave. He wanted to get out and shake hands, unencumbered. He loved crowds. And the crowds were big.

Still, the shooting in Dallas surprised everyone. When agent Paul Landis heard the first shot from his seat in the car behind Kennedy, he continued to scan the buildings and the crowds. But he didn’t see anything.

"I thought, 'Well maybe there was a blow-out or something,'" Landis said. "When the third shot happened, I saw the President's head explode, just like a melon. And well, I knew as soon as he'd been hit, there was no way he was gonna survive that."

For the men who weren't on the scene, shock hit first. But they had jobs to do. So, they pushed aside their emotions and went to work -- moving the children to a home in Georgetown, escorting the President's body to the White House, and later accompanying the First Lady on her powerful, yet dangerous walk from the White House to St. Matthew's Cathedral.

"When all this is going on, your personal feelings are one of a tremendous emotional hit because of the respect you have for that family and for the president," remembered agent Tom Wells, who was escorting young Caroline to her first sleepover when he heard the news that Kennedy had been shot.

Like the other agents, Wells had a deep respect for Kennedy, who knew the names of all his guards, frequently asked about their families, and made them feel like they were a part of his own.

"You've got an upheaval that goes on in your mind and in your gut," Wells said. "There's this unbelievable sympathetic feeling you have. But there's no room for that because the only thing you have got to deal with now is what your role is. So, it is a difficult time. It's a roller coaster, even as detached as I was from the main event."

Eventually, each agent moved on.

"We have a code in the Secret Service called 'worthy of trust and confidence,'" Blaine said. "So I made a decision. You walk away from here. You don’t talk about it. You put it behind you."

As close as they were during the Kennedy administration, many of the agents lost touch with each other in the years following the assassination. Many agonized about what they could have done differently to prevent the shooting. Eventually, they tried to forget.

"Of course, I wish Dallas never happened," said agent Ron Pontius. "Everyone will say that. It was a terrible thing to happen. And I think we're marked for it for the rest of our lives."

Agent Clint Hill was in the motorcade behind Kennedy that day in Dallas. After the fatal shot, Hill jumped on the back of the President’s car and held on as the car raced to the hospital. In the years after the assassination, Hill sunk into a downward spiral of depression and alcoholism. In 1990, when he was pulling his life back together, he finally visited Dallas again.

"I walked in Dealey Plaza for a long time, looking back and forth and up and down, at every angle, for everything possible that I could think of," he said. "How could this have been avoided? What could we have done differently? Where did we go wrong? Why did it happen?"

"I finally came to the conclusion that because of everything that happened that day," he continued, including the weather, the configuration of the streets, and the position of the shooter, "that every advantage had gone to the shooter that day. And we had none."

"So I realized that based on all those conditions, there was nothing that I could have done," he said. "And I finally accepted the fact that what happened was something that I could not avoid. And so that was a great deal of relief to me."