War May Be Hell, but a Competition Show Awaits 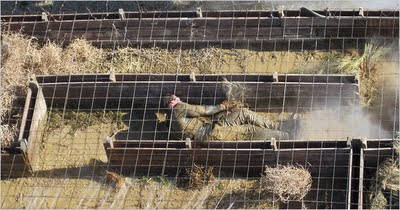 The best propaganda doesn’t tip its hand. Want to make a show that engenders respect and sympathy for the armed forces without complications? Take it out of the theater of war. Afghanistan is no closed set.

“One Man Army,” a competition show that begins Wednesday on the Discovery Channel, reframes military men, hard-core law-enforcement officers and the occasional outsider as relatable heroes, fighting for a cash prize just as if they were on the soon-to-return “Fear Factor.” Sometimes they face challenges that aren’t much tougher than those on “Fear Factor,” and sometimes they have to break through a cinderblock wall with a sledgehammer while getting doused with cold water.

This show is part of the passive militarization of popular culture: not the lionizing of active-duty soldiers that would come directly from the armed services, but rather using people with military and paramilitary backgrounds as a casting pool for sympathetic characters.

These men, some decommissioned, have already been through the fire and have little at stake beyond upholding the principles they’ve imbibed over their careers. (So far, there are no plans for a “One Woman Army.”)

Hosted by Mykel Hawke (“Man, Woman, Wild”), a former Green Beret who narrates in a voice that suggests Casey Kasem as a hostage negotiator, “One Man Army” puts participants through challenges that test speed, strength and intelligence. “The most important weapon of war is the mind — battles are won or lost with that tool,” Mr. Hawke says in a sexy whisper.

But what’s more important than the challenges here are the ethics. When one contestant struggles to complete the strength challenge, the others nobly cheer him on to finish, even after Mr. Hawke tells him, “This war’s over, buddy.”

Three of the four competitors on the first episode of “One Man Army” are in their early 40s, each a little past his physical prime, though still holding on to former glory. (Each episode will feature four new participants.)

Robert is a former Air Force pararescue specialist and Delta Force member; Kevin is a United States Marshal; and James, a former undercover narcotics detective, spent time in Iraq as a private security contractor and, as he recounts, was involved in an ambush in which three colleagues were killed.

Jeffrey, a hyperactive 28-year-old weapons instructor with no combat or law-enforcement experience, is the clear outcast.

The schism between those with combat and law-enforcement experience and those who merely like to shoot guns is a problem for shows like these, which aim to uphold military values, of which tolerance does not always appear to be one.

It’s not limited to “One Man Army.” The most compelling moments on the second season of the History Channel’s “Top Shot,” which concluded in April, involved the saga of the golf instructor Jay Lim, a naturally gifted shooter and a teddy-bear-soft competitor. For weeks he was ostracized and insulted by the military men in the house, who struggled to eliminate him. The more they hazed him, the better he shot.

The skills demanded on shows like these aren’t the preserve of men in uniform. Even “Special Ops Mission,” a “Man vs. Wild” of military tactics that aired on the Military Channel in 2009 and starred a former Army Ranger and Air Force pararescue specialist undertaking mock missions, played more like a special operations fantasy camp that anyone could join.

And sometimes what television asks of soldiers has — deliberately — nothing to do with their day jobs. That’s the case with military family-reunion shows like “Coming Home” on Lifetime and “Surprise Homecoming” on TLC, which depict soldiers not as instruments of war but as family pillars resuming their rightful roles.

Maybe some of those returning soldiers will have the itch to compete on “One Man Army.” Robert, now a family man, is clearly still chasing a high.

It’s not revealing too much to say that in the end it comes down to Robert and his spectacularly symmetrical body — in a movie, Tom Cruise and Jason Statham would fight for the part — and Jeffrey, who would maybe be played by Conan O’Brien. Or the guy who played Screech on “Saved by the Bell.”

Late in the episode Jeffrey is revealed to be gay.

“I’ve been asked why didn’t I join the military and the truth is, when I wanted to go in they said that they didn’t want gays,” he says. “I’m a rule follower, and I wasn’t going to be able to lie.”

That he’s on this show, and extremely competitive, is an implicit rebuke to the military that kept him at arm’s length. Maybe it’s an inconvenient truth, or maybe it’s propaganda of a different sort.