is a letter written by Ludwig van Beethoven to his brothers Carl and Johann at Heiligenstadt (today part of Vienna) on 6 October 1802. 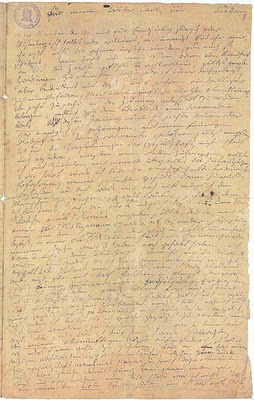 It reflects his despair over his increasing deafness and his desire to overcome his physical and emotional ailments in order to complete his artistic destiny. Beethoven kept the document hidden among his private papers for the rest of his life, and probably never showed it to anyone. It was discovered in March 1827, after Beethoven's death, by Anton Schindler and Stephan von Breuming, who had it published the following October.


A curiosity of the document is that, while Carl's name appears in the appropriate places, blank spaces are left where Johann's name should appear (as in the upper right corner of the accompanying image). There have been numerous proposed explanations for this, ranging from Beethoven's uncertainty as to whether Johann's full name (Nikolaus Johann) should be used on this quasi-legal document, to his mixed feelings of attachment to his brothers, to transference of his lifelong hatred of the boys' alcoholic, abusive father (ten years dead in 1802), also named Johann.
Lockwood, Lewis (2003). Beethoven: The Music and the Life. New York, NY: W. W. Norton & Company. ISBN 0-393-32638-1.

For my brothers Carl and Johann Beethoven

Oh you men who think or say that I am malevolent, stubborn, or misanthropic, how greatly do you wrong me. You do not know the secret cause which makes me seem that way to you. From childhood on, my heart and soul have been full of the tender feeling of goodwill, and I was even inclined to accomplish great things. But, think that for six years now I have been hopelessly afflicted, made worse by senseless physicians, from year to year deceived with hopes of improvement, finally compelled to face the prospect of a lasting malady (whose cure will take years or, perhaps, be impossible).

Though born with a fiery, active temperament, even susceptible to the diversions of society, I was soon compelled to isolate myself, to live life alone. If at times I tried to forget all this, oh, how harshly was I flung back by the doubly sad experience of my bad hearing. Yet it was impossible for me to say to people, "Speak Louder, shout, for I am deaf". Oh, how could I possibly admit an infirmity in the one sense which ought to be more perfect in me than others, a sense which I once possessed in the hightést perfection, a perfection such as few in my profession enjoy or ever have enjoyed. – Oh I cannot do it; therefore forgive me when you see me draw back when I would have gladly mingled with you.

My misfortune is doubly painful to me because I am bound to be misunderstood; for me there can be no relaxation with my fellow men, no refined conversations, no mutual exchange of ideas. I must live almost alone, like one who has been banished. I can mix with society only as much as true necessity demands. If I approach near to people a hot terror seizes upon me, and I fear being exposed to the danger that my condition might be noticed. Thus it has been during the last six months which I have spent in the country. By ordering me to spare my hearing as much as possible, my intelligent doctor almost fell in with my own present frame of mind, though sometimes I ran counter to it by yielding to my desire for companionship.

But what a humiliation for me when someone standing next to me heard a flute in the distance and I heard nothing, or someone standing next to me heard a shepherd singing and again I heard nothing. Such incidents drove me almost to despair; a little more of that and I would have ended my life. It was only my art that held me back. Oh, it seemed to me impossible to leave the world until I had forth all that I felt was within me. So I endured this wretched existence, truly wretched for so susceptible a body, which can be thrown by a sudden change from the best condition to the worst. Patience, they say, is what I must now choose for my guide, and I have done so - I hope my determination will remain firm to endure until it pleases the inexorable Parcae to break the thread. Perhaps I shall get better, perhaps not; I am ready. - Forced to become a philosopher already in my twenty-eight year, oh, it is not easy, and for the artist much more difficult than for anyone else. Divine One, thou seest my inmost soul thou knowest that therein dwells the love of mankind and the desire to do good. Oh, fellow men, when at some point you read this, consider then that you have done me injustice. Someone who has had misfortune may console himself to find a similar case to his, who despite all the limitations of Nature nevertheless did everything within his powers to become accepted among worthy artist and men.