Authors With a Following Make Money Going It Alone, but It's a Slog for Others

By JEFFREY A. TRACHTENBERG

Self-publishing these days is increasingly a tale of two cities.
There are established authors, like Nyree Belleville, who says she's earned half a million dollars in the past 18 months selling direct rather than through a publisher..
Then there are new authors, like Eve Yohalem. More than a month after self-publishing, she has grossed about $100 in sales— after incurring costs of $3,400. She said she's in no rush, though. 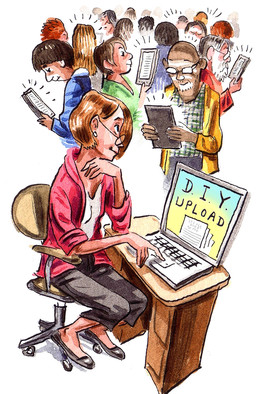 Rob Shepperson
Vanity presses have been available for decades. But thanks to digital technology and particularly the emergence of e-books, the number of self-published titles exploded 160% to 133,036 in 2010 from 51,237 in 2006, estimates R. R. Bowker, which tracks the publishing business.
Amazon.com Inc. fueled the growth by offering self-published writers as much as 70% of revenue on digital books, depending on the retail price. By comparison, traditional publishers typically pay their authors 25% of net digital sales and even less on print books.
For some established authors, these terms can make self-publishing a financial home run. Ms. Belleville, for instance, a veteran romance author who wrote for seven years under the pseudonym Bella Andre and a year as Lucy Kevin, self-published her first e-book in April 2010. She has since cumulatively sold 265,000 units of 10 self-published titles, most priced between $2.99 and $5.99. Her total take from those 10 titles since last April: in excess of $500,000 after expenses, she says. Previously, the most she ever made from a book was $33,000.
Self-published women's fiction writer Darcie Chan has seen her new work, "The Mill River Recluse," hit No. 5 on The Wall Street Journal's list of digital fiction bestsellers for the week ended Oct. 23. Ms. Chan priced her novel about a secretive widow living in Vermont at 99 cents, and says she has sold "hundreds of thousands" of copies since it went on sale on Amazon in May. The book, also carried by Barnes & Noble Inc. and other e-retailers, was previously rejected by major publishing houses.

"My original intention was to gradually get my name out there as a writer, because when it was rejected one of the things I heard was that nobody knew me," says Ms. Chan. "I never expected this."
Ms. Chan says the book was featured on several Kindle-related sites that recommend e-books to readers. In August it broke into the top 10 on the Kindle store, where it ranked No. 6 Friday. She paid a site to review her book, which she thinks may have given her book a boost. And she also did some "inexpensive Web-based advertising" which also got the word moving among readers. Ms. Chan, a lawyer by training, said the novel is now being resubmitted to major publishers.
Then there are writers like Erik Kjerland. He has self-published four novels and one book about self-publishing in the past year under the pseudonym Derek J. Canyon. His profit of about $5,000 on sales of roughly $10,000 is better than he'd hoped but not enough for him to quit his day job as a technical writer.
The question that most intrigues would-be self-published authors isn't whether they'll be viewed as literary outcasts, but how to do it and what it costs. Simply getting attention is an enormous challenge, although e-books have a longer shelf life.
"One of the big differences between e-books and print is the sales cycle," says Ms. Yohalem. "It's almost inverted. A chain store buyer makes a decision as much as six months before the book is published, and then it has no more than six months on the shelf. At that point your sales cycle is over. But with e-books, it's completely the opposite. It's often six to nine months before your book takes off, and you never take it down."
She says she began to think seriously about self-publishing after her second book—a collection of short stories aimed at readers 6-10—was rejected and she realized there wouldn't be enough of a market to lure a big publisher. She also wanted to experiment with self-publishing. Her first middle-grade novel, "Escape Under the Forever Sky," had been issued by Chronicle Books in 2009 to good reviews but only modest sales. Chronicle told her that story collections targeted to that audience don't sell. A separate young-adult novel didn't find a buyer either.
To learn about self-publishing, Ms. Yohalem visited blogs such as Joe Konrath's "A Newbie's Guide to Publishing." She also spent time on KindleBoards.com, an independent community focused on topics related to Amazon's Kindle e-reader, including self-publishing. Within a few months she decided to self-publish the short-story collection. She priced "Grandpa Hates the Bird: Six Short Stories of Exciting, Hilarious and Possibly Deadly Adventure" at $2.99 and priced individual stories at 99 cents each.
It helped that her sister and two friends, all experienced editors, lent their services free of charge. This saved her $1,000 to $2,000, she says. She commissioned a cover illustration for $400.
She then hired Telemachus Press LLC in Longboat Key, Fla., to act as her digital publisher, including formatting the manuscript, for about $3,000.
One of the things that Ms. Yohalem did for promotion was tap Facebook. A friend searched for bird/parrot related pages, posting a message on nine sites praising the "Grandpa Hates the Bird" titles. Ms. Yohalem then "liked" the pages and the postings on each site. Ms. Yohalem did her own searches on Facebook and when she found sites she considered appropriate, she posted a note about her books.
Ms. Yohalem says that her titles went live on Barnes&Noble.com the week of Sept. 26, and on Apple Inc.'s iBookstore the week of Oct. 3. So far, she says she's made 44 sales on Amazon, including 34 sales at $2.99, and four sales of the entire collection at Smashwords Inc., an e-book distributor. "I'm just getting started. It's way too soon to begin counting dollars." She hopes to soon sell a new middle-grade novel to a traditional house.
Write to Jeffrey A. Trachtenberg at jeffrey.trachtenberg@wsj.com