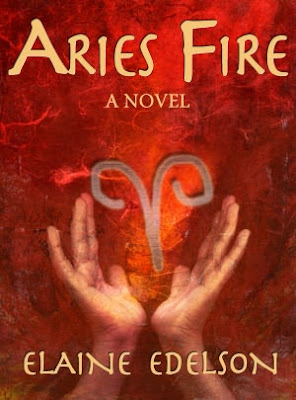 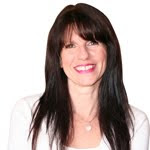 Q. Elaine, you’re an internationally recognized astrologer and intuitive channel. And you used astrology and your intuitive gifts to write “Aries Fire.” Please tell us about that.

A. Yes, I did use astrology to help create my characters. Each astrological sign, for those who don’t know, has certain traits and characteristics and qualities associated with them. You might have heard comments like, “She’s such a Gemini,” or “It’s just like a Capricorn to do that.” Since astrology is part of my profession, I used it as a tool to guide me in creating Seira, my main character.

What I did was create Seira’s astrological natal chart. The natal chart is a picture, or a snapshot, of the position of the planets at the moment of someone’s birth based on their birthdate, exact time of birth, and location, where they were born.

A natal chart illustrates the theme of a person’s life. So in looking at Seira’s chart, I could see certain events unfold which helped me to create tension and conflict based on her personality traits…her stubborness, her impulsiveness, and even her gift for ‘seeing’ and as a healer. Ya’ know, I’ll tell you, what gave me the idea for this was something that happened to me long ago.

I did a chart for a client. He emailed me his birth information. I immediately did a preliminary chart and thought…WOW …this guy is like the second coming of Christ or something.

I called him on the phone to verify his birth information because I like to be absolutely sure of the data. When I spoke with him on the phone a few days later, he told me he’d given me an incorrect birth time! So, I course-corrected and we proceeded on our merry way. So I essentially created a chart for someone that didn’t exist. (Or maybe they did, I just didn’t know it.)

And I thought, “Hey! I could create a chart for anyone, even someone fictitious.” So that’s what I did.

Regarding intuition…this might sound a bit odd, but as an intuitive channel, my frequency is open to those who’ve passed on. (Yes, I hear and see dead people.) Chatting with spirits is not uncommon for me and so I utilize this…gift…in all areas of my life.

For instance, when I’m writing and can’t think of a word I’m looking for, I’ll take a moment and get quiet. And then, I’ll hear the word and then think, ’what does that mean?’ I’ll look it up and viola! It’s the perfect word for the description or scene. I also trust my intuition when I’m stuck or stumped about what to write next. I’ll see an image, or smell certain scents or foods, hear a piece of music, and it’ll trigger a scene.

The world beyond our immediate and physical vision exists–sentient beings or whatever you wish to call them–angels, guides, passed on loved ones, muses, spirits. They love a good story, too, and are so willing to interject. I’ll read something I’ve written a few weeks after I’ve written it and think, “Wow, I don’t remember writing this!” We’d like to think we do things all by ourselves, but I know it’s all about collaboration.

Q. Did you use astrology to help you create other characters or situations in the book?

A. Actually, I focused solely on the Seira. ‘Aries Fire’ is dedicated to the astrological sign of Aries, so I made sure my protagonist was an Aries, through and through. But the other characters were taken from the history of the time OR I created them. In Kiki’s case, for example, I heard an accent in my head and used that as a jumping point to create her physical attributes and behavior. Both methods are just as fun.

Q. The characters you created are wonderfully rich and textured. And you’re very specific and nuanced when you describe behavior, whether it’s two characters interacting or a character responding to a situation or their surroundings. Would you elaborate on that?

Thanks! Sure. Happy to. Every person is unique, no matter the era. I’ll spend time at a lunch counter or on line at the grocery check out and observe people; what they do, what they say, how they say it. I’m amused by some, surprised by others, but this is the stuff of story.

I’ll pull up to a red light in my car and glance over at the car next to me and see a middle-aged man in a business suit singing his lungs out, pounding the steering wheel like he’s the drummer for Guns N’Roses. And I think, “This is hysterical. What makes this guy tick? Who is he? What’s going on in his life?”

No matter how major or minor the character, I want them to stand out in some way, in their own way. I need them to make a difference. When I wrote ‘Aries Fire’ I intentionally set out to breathe dimension into each character, no matter what their role. I hope that’s something I conveyed in the story. For instance, when Bishop Cyril is approached by his steward, I deliberately gave this man a distinct attitude evidenced by his efficient and brisk behavior. I love the steward… and he doesn’t even have a name! For me, it’s really critical that I envision each character fully, no matter what their role or station. They have a distinct purpose for being.

Q. This story grabs us from the very first pages, and doesn’t let up. Your main character Seira is really put through the ringer in her journey across the continents. How were you able to keep up this pace?

A. You know, honestly, all I did was create and mirror an Aries pace. Do you know any Aries? (Or any Aries Rising signs for that matter?) They can go all day and never see the dust clouds they leave behind. I’ve got a friend who’s an Aries Rising sign (In astrology, the Rising sign denotes the way the world sees you and interacts with you…your Rising sign is your worldly persona.)

Anyway, we used to live in neighboring towns in New Jersey. One day in winter we were slammed by a full-scale blizzard. I mean I was trapped in my house because the snowdrifts covered my door. Everything was at a stand-still. My friend called me and said she wanted to drive to Queens to visit her boyfriend, and wanted to know what I thought. I said, “Sweetie. The airports have shut down. The buses aren’t running. We’re nearing a state of emergency and you want to drive to Queens? I think you’re in denial!”

An Aries acts and behaves with almost blind determination. They surround themselves with constant motion. They shake things up, intentionally or not! You just cannot say ‘NO’ to an Aries and have them effectively hear you. In a lot of cases, conversation means confrontation to an Aries. So with Seira, she wasn’t going to be sitting around watching life happen. Not possible. She was going to blast her way through life…and many times without any thought as to the consequences.

What it comes down to for anyone, whether they’re an Aries, Aries Rising or not…who you are is what you’ll attract in the world. You create your world–your own peace, your own chaos, your own boredom, your fears, your own joy. Seira was angry. She wasn’t going to stop moving until she figured out a few things. I think I’d vote for her if she ran for President.

Q. You write very visually. In fact, you have a way of immersing all the reader’s senses in the story…smell, taste, touch, sound. Is this intentional?

A. It’s intentional in the sense that each day I set my intention. I’m a very sensual woman. (I think it’s one of the reasons my husband likes me!) I take great joy in feeling, seeing, tasting, touching, smelling, sounds, music. I live in this heightened sense of awareness when I set my intention on being present.

When I’m writing, I don’t think about immersing the reader’s senses in my story. I visualize what my characters are experiencing, with all their senses, immersed in their surrounding, and write as if I’m experiencing it.

Q. The story takes place in the early years of the 5th century, in and around the Middle East, in what was then the Eastern Roman Empire. What attracted you to this period in history?

A. When I was searching for an era to write about, I didn’t have to go far. Soon after I began thinking about what to write, I attended a friend’s 50th birthday party. One of the party favors was a yellow 12” ruler. On the ruler were was a list of “Great Women Rulers of Art” throughout history. Something sparked inside me.

After the party I went home and Googled “famous women in history.” Hypatia of Alexandria was the first name to pop up, #1 on Google. Sidebar…how does that happen? She’d been dead for 1600 years, did no marketing, no SEO, and yet she ranks first on page one. I always trust that the Cosmos has my back!

There was little information and historical data on her but the morsels I did find were fascinating. I was enamored with her, and thought this is a terrific woman to write about. Since what we know about her is minimal–and yet her legacy and the impression she left grand—the tidbits did lend themselvles to a great story. It gave me the freedom to play without adhering so much to historical fact. I thought, “This is a perfect setting for my story. I’ll give Hypatia a bastard daughter.” And the seeds for my story were plopped into fertile ground.

I did extensive research ( I love research!) about the era and surrounding countries and cultures. I then created a timeline of the era that incorporated religion, spirituality and mysticism, peoples, the political climate, wars, and conquests. Rome, the Huns, the Jews…they all popped up during this turbulent time in the 5th century C.E. There it was, waiting for me all along.

That’s the thing about history. There’s so much of it out there, all we need to do is pick one small thing and it leads you down a path. I remember doing research on the type of ship that would take Seira to Ashkelon. And that led me to the types of wood used to build the ships, which led me to life in the marketplace. On and on. I think some famous book said, “Seek and ye shall find.” Wait a second…that’s what my mother used to say when I was looking for my favorite socks. It happens to be true.