THANKS TO DAVID SKINNER FOR THIS GREAT HIT!


A Star Who Was Born, Sparkled and Fell
‘End of the Rainbow,’ on Judy Garland, at Belasco Theater 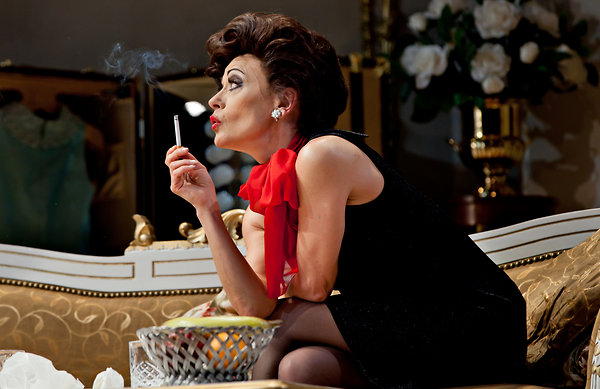 End of the Rainbow, with Tracie Bennett as Judy Garland, at the Belasco Theater.

As befits a play about JudyGarland, a woman known for liberally mixing her pills, Peter Quilter’s “End ofthe Rainbow” is a jolting upper and downer at the same time. After watchingTracie Bennett’s electrifying interpretation of Garland in the intenseproduction that opened on Monday night at the Belasco Theater, you feel exhilaratedand exhausted, equally ready to dance down the street and crawl under a rock.

In other words, you feelutterly alive, with all the contradictions that implies. That’s what comes fromwitnessing acting that is this unconditionally committed, not to mention thissensational — in every sense of the word.

Set in 1968 in a London hotel suite and a nightclub, where a shaky Garland has arrived foryet another of her fabled comebacks, Mr. Quilter’s play is in some ways yourstandard-issue showbiz pathography, a lurid account of the twilight of anall-too-mortal goddess on the eve of destruction. Yet while it includes detailsthat would have been greedily consumed by readers of Confidential magazine,“End of the Rainbow” is revealing in a way that tell-all bio-drama seldom is.

For that you can thank Ms.Bennett, who, as directed by Terry Johnson, is giving one of the most completeportraits of an artist I’ve ever seen. More than four decades after Garland’s death at 47 in1969, her persona (like that of Marilyn and Elvis) remains one of the mosteasily identified and imitated in American culture.