Messiah Matrix can be noted as a high- minded novel which draws readers into a world filled with corruption, murder, romance and history. The author, Kenneth John Atchity explores a highly controversial idea about the story of Jesus Christ. 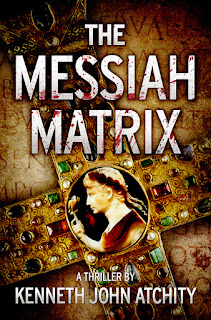 Atchity’s extensive research manages to compel the reader’s attention within the first two pages as the novel kicks off with the murder of a monsignor, a confession from his killer and the discovery of a valuable artefact which might just change our understanding of Christianity as we know it.

Readers are drawn into the mind of Father Ryan, a young Jesuit priest who is obsessed in finding the connection between the murders, the message which was delivered by the assassin and his own personal doubts about his religious faith. By questioning the inconsistencies within the Catholic teachings his path crosses that off Emily – a spirited beauty who is the discoverer of the historical artefact.

Together they set off on a journey that not only unravels Christian history but also poses extreme risks for them in face of church authorities. Their findings cast them into a splendidly crafted net that lures readers through Roman History and the ancient story of Augustus. It ends with the truth revealed about the Christian Saviour—one which will come as a surprise to many.

In conclusion: This novel, in my opinion is splendid. The storytelling accelerates in momentum and grabbed my attention from the word go. Sure, there were times where my brain was in panic from all the revelations, but there were also times where the pages just turned themselves from the riveting adventure.

I’m sure the story will raise many questions for people who grew up in deep faith. What’s nice about Atchity’s writing though is the fact that he doesn’t force readers into believing in the book’s premise; instead he merely lays out his research, marvellously joining it together in a provocatively crafted romantic thriller.
Not a light read at all but if you are up for intellectual entertainment - a must read.

Email ThisBlogThis!Share to TwitterShare to FacebookShare to Pinterest
Labels: My Addiction, Review