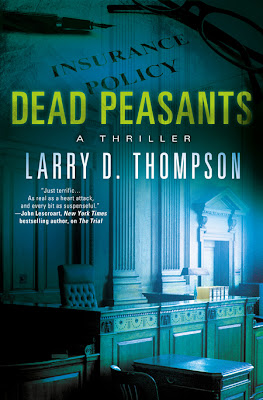 Jack Bryant was born and raised in Ft Worth, Texas.  Some might say he grew up on the wrong side of the tracks.  Jack, soon to retire, is a successful plaintiff lawyer practicing in Beaumont, Texas.   He moved back to his home town to watch his son play college football and to show all of those people (from the right side of the tracks) how well this former poor boy did as an adult.  His son, JD Jr., is a walk-on at TCU and is balancing his training with spending time with his father.  Upon arriving home Jack meets Colby Stripling, a woman with a secret, as well as a real estate agent who sells him the oversized home that he pays for with cash, just because.

When Jack realizes that retirement isn’t all it’s cracked up to be he decides to become a pro bono lawyer for the less fortunate.  His first case is for June Davis, the widow of a local man (Willie Jr.) Jack has become friends with. June finds out by accident that his former employer, Allison Motors, had a life insurance policy on her late husband that paid $400,000 when he died.  Jack attempts to get Allison Motors to relinquish the funds to June however, during the course of the trial it is determined that there is more going on than just one Dead Peasant policy.

This is a fun and fast paced novel without a lot of unnecessary filler.  The characters had very distinct personalities, even those that were not so prominent such as Willie Jr. You could see the confusion he suffered with the changing racial times and what he was brought up with.   The descriptions of the area are rich and accurate.  Being a Native of Fort Worth, I loved reading about Fort Worth, the local streets, buildings and areas that are so familiar to me.  On the other hand, I found some of the other details to be exaggerated. We understand that Jack is filthy rich and he likes things a certain way, but it felt like overkill or name dropping with the incessant use of name brands or school names.  It felt a little bit like product placement in the movies.  However, these negatives are not enough to distract from the story line.  The novel made us guess and then guess again as twist and turns led to the eventual killer.  This book is not too long (~210 pages) and would make for a great read weekend read. Excellent job!

About the Author:  Larry D. Thompson is a veteran trial lawyer and has drawn on decades of experience in the courtroom to produce riveting legal thrillers. Dead Peasants is is third After graduating from the University of Texas School of Law, Thompson founded the Houston trial firm where he still serves as managing partner. The proud father of three grown children, he lives and works in Texas but spends his summers in Colorado, where he crafts his novels and hikes the mountains surrounding Vail. His greatest inspiration came from Thomas Thompson, his brother, who wrote many best-selling true-crime books and novels.