Those who can't create, calculate ... ? [via David Angsten]

Solving Equation of a Hit Film Script, With Data 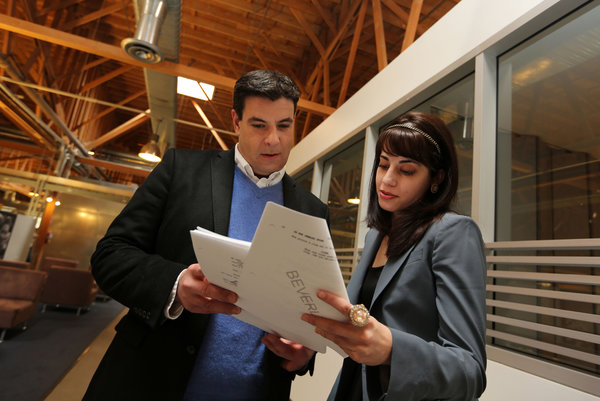 The same kind of numbers analysis that has reshaped areas like politics and online marketing is increasingly being used by the entertainment industry.

Netflix tells customers what to rent based on algorithms that analyze previous selections, Pandora does the same with music, and studios have started using Facebook “likes” and online trailer views to mold advertising and even films.

Now, the slicing and dicing is seeping into one of the last corners of Hollywood where creativity and old-fashioned instinct still hold sway: the screenplay.

A chain-smoking former statistics professor named Vinny Bruzzese — “the reigning mad scientist of Hollywood,” in the words of one studio customer — has started to aggressively pitch a service he calls script evaluation. For as much as $20,000 per script, Mr. Bruzzese and a team of analysts compare the story structure and genre of a draft script with those of released movies, looking for clues to box-office success. His company, Worldwide Motion Picture Group, also digs into an extensive database of focus group results for similar films and surveys 1,500 potential moviegoers. What do you like? What should be changed?

“Demons in horror movies can target people or be summoned,” Mr. Bruzzese said in a gravelly voice, by way of example. “If it’s a targeting demon, you are likely to have much higher opening-weekend sales than if it’s summoned. So get rid of that Ouija Board scene.”

Bowling scenes tend to pop up in films that fizzle, Mr. Bruzzese, 39, continued. Therefore it is statistically unwise to include one in your script. “A cursed superhero never sells as well as a guardian superhero,” one like Superman who acts as a protector, he added.

His recommendations, delivered in a 20- to 30-page report, might range from minor tightening to substantial rewrites: more people would relate to this character if she had a sympathetic sidekick, for instance.

Script “doctors,” as Hollywood refers to writing consultants, have long worked quietly on movie assembly lines. But many top screenwriters — the kind who attain exalted status in the industry, even if they remain largely unknown to the multiplex masses — reject Mr. Bruzzese’s statistical intrusion into their craft.

“This is my worst nightmare” said Ol Parker, a writer whose film credits include “The Best Exotic Marigold Hotel.” “It’s the enemy of creativity, nothing more than an attempt to mimic that which has worked before. It can only result in an increasingly bland homogenization, a pell-mell rush for the middle of the road.”

Mr. Parker drew a breath. “Look, I’d take a suggestion from my grandmother if I thought it would improve a film I was writing,” he said. “But this feels like the studio would listen to my grandmother before me, and that is terrifying.”

But a lot of producers, studio executives and major film financiers disagree. Already they have quietly hired Mr. Bruzzese’s company to analyze about 100 scripts, including an early treatment for “Oz the Great and Powerful,” which has taken in $484.8 million worldwide.

Mr. Bruzzese (pronounced brew-ZEZ-ee), who is one of a very few if not the only entrepreneur to use this form of script analysis, is plotting to take it to Broadway and television now that he has traction in movies.

“It takes a lot of the risk out of what I do,” said Scott Steindorff, a producer who used Mr. Bruzzese to evaluate the script for “The Lincoln Lawyer,” a hit 2011 crime drama. “Everyone is going to be doing this soon.” Mr. Steindorff added, “The only people who are resistant are the writers: ‘I’m making art, I can’t possibly do this.’ ”

Audience research has been known to save a movie, but it has also famously missed the mark. Opinion surveys — “idiot cards,” as some unimpressed directors call them — indicated that “Fight Club” would be the flop of the century. It took in more than $100 million worldwide.

... “All screenwriters think their babies are beautiful,” he said, taking a chug of Diet Dr Pepper followed by a gulp of Diet Coke and a drag on a Camel. “I’m here to tell it like it is: Some babies are ugly.”