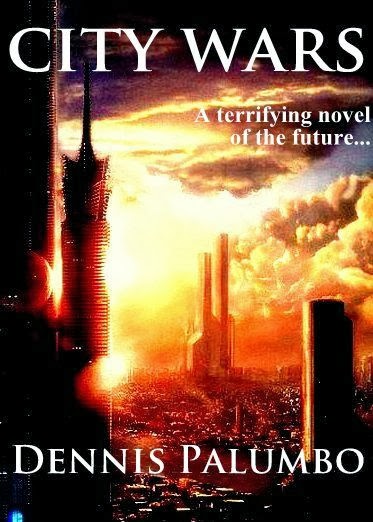 Cassandra and Jake survived in the urban wasteland that was Chicago. Waiting in constant readiness for the day when war would break out again … with New York, Washington, perhaps Dallas.

Then the attack came without warning. A limited atomic bombardment that threatened worse devastation.

With the Government of Chicago crippled by panic, betrayal and murder, Jake and Cassandra were forced into action alone.

“We are each of us cities,” the Scholar sang.
George Weston spent the last minute of his life waiting in line at a hot-pretzel stand in the middle of a crowded Chicago intersection. He’d just given his order—two pretzels, hold the mustard—when a cry from somewhere behind him made him look back.
The crowd of people dispersed almost immediately, some shouting and shoving their way off the curb, others merely shrinking back against gray-walled buildings, huddling together and making no sound and looking up at the sky.
George Weston took his lunch and turned away from the vendor’s stand. He squinted in the midday light. Where had his wife gone? She’d been only a few feet away.
He was aware suddenly of the scream of a woman, and, from somewhere a few blocks away, that of a shrill siren.
George Weston finally looked up, just in time to see the dazzling whiteness as it descended.
How absurd, he thought (for he was a man of some irony). How absurd I will look, a smoldering husk with a ruined hot pretzel in each hand.
He’d no more time to reflect on this particular image. The white heat enveloped him now, first searing off his skin, then vaporizing the majority of his internal organs.
He was dead before the thing that had once been George Weston hit the pavement.
A few minutes later, a Chronicler scurried up the walkway, dragging a thick tarpaulin. Wordlessly, he covered the smoking remains; then, taking out his notebook, he filed the death for Census.
The crowd, over its initial fear, ventured closer to the body. Some averted their eyes; most didn’t. A few went so far as to say a prayer. Only one among them seemed near the point of hysterics, a pale gangling woman later identified as Mrs. George Weston.
The Chronicler looked up from his notebook and motioned for the citizens to move on. Then, bundling his cloak of office about him, he disappeared among the shadows and shapes of the dead buildings.
A few blocks away, the siren’s whine grew faint.

3
Cassandra Ingram stood before the ID module and awaited verification. When she’d been cleared, she was mildly surprised to learn that she was to report to Tactics.
“What’s the big excitement?” she asked the sentry.
He smiled and shook his head.
“You know Gilcrest. Everything’s an emergency. Somebody probably spotted a kite flying over the Lake.”
Cassandra smiled back, as warmly as a Guardian may to a sentry. Then she stepped into the pneumatic and descended to Main Level.
Government existed in an underground labyrinth, six-tenths of a mile beneath the surface streets of Chicago. Very few citizens ever saw the interior of Government, or its subsidiary branches of Commerce, Tactics, Census, Environment and Police. It was enough for the people to know that the city was governed, that the machinery would continue to provide for their comfort and well-being.
The pneumatic opened slim double doors onto the luminescent corridor of Main Level. Cassandra got out and went the short distance through lighted bulkheads to Tactics.
The chamber was a large octagon, high-walled and flushed with the cold luminescence of the labyrinth. A great oaken desk—and one of the few natural wood pieces Cassandra had ever seen—stood in the middle of the room. A dozen chairs circled the desk, the chair furthest from where she stood at the entrance to the chamber occupied now by an old man in a vivid purple cloak. He was alone.


No part of this book may be reproduced or transmitted in any form or by any means, electronic or mechanical, including photocopying, recording, or by any information storage and retrieval system, without the express written permission of the author.