Maryland Shines Spotlight on War of 1812


As we prepare Andrew Jackson—Battle for New Orleans the news begins to serve the project and will refresh American memory about the controversial War of 1812 that ended definitively with Jackson’s defeat of the British at New Orleans. 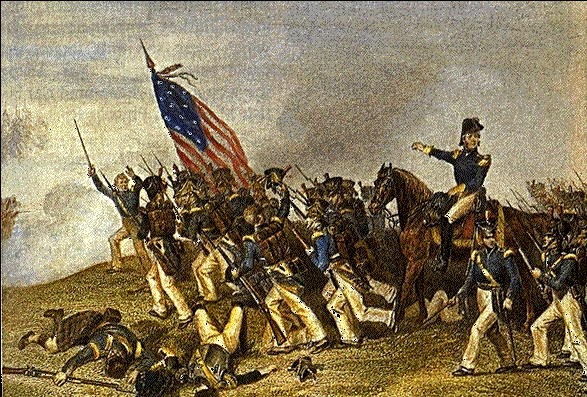 BALTIMORE—Maryland officials are on a campaign to elevate the profile of the War of 1812, a historically unpopular conflict that ended in a draw with Britain and has long been overshadowed by the Revolutionary and Civil wars.

The state is planning a weeklong festival next month to mark the 200th anniversary of the city's defense in 1814, which inspired Francis Scott Key to pen the poem that later became the lyrics to "The Star-Spangled Banner," the national anthem.

State officials also have awarded $5.5 million in grants for celebrations, educational programs and research, hoping to generate a lasting patriotic buzz about Maryland's starring role in a war that largely has been written off as a historical footnote.

"This is not just about having a party and shutting it down for another hundred years," said Bill Pencek, executive director of Maryland's War of 1812 Bicentennial Commission. He said the state is counting on an enduring tourism boost.

If it is recalled at all, the War of 1812, which ended in 1815, is most often remembered for the British burning of Washington and the White House. But some of the lowest and highest points in the conflict actually occurred in nearby Maryland.

The error-filled collapse of American troops in Bladensburg, Md., in August 1814 gave the British easy entrée to the nation's capital. By contrast, the successful defense of Baltimore amid the British bombardment at Fort McHenry helped fuel American patriotism when an oversized American flag stood tall following the siege.

Commemorative coins are displayed for sale at the Fort McHenry gift shop. Melissa Golden for The Wall Street Journal

The war was folly, said Don Hickey, a history professor at Wayne State College in Nebraska who has written books on the subject. Though the U.S. declared war over legitimate British interference with American trade and the seizure of its sailors, it made no sense militarily, he said.

Still, the conflict "helped forge an American identity," Mr. Hickey said, and gave rise to such lasting symbols as Uncle Sam. It also helped propel the political careers of prominent U.S. figures, including future President Andrew Jackson, who defeated a British force near New Orleans in 1815, unaware that the two countries had signed a truce weeks earlier.

The Maryland grants, funded by corporate sponsorships and commemorative coin sales, have been matched by $14 million in public and private contributions. They have financed an IMAX film, improvements to the sleepy waterfront in southern Maryland where British forces landed, the restoration of an insect-ravaged cavalry jacket, and a camera network called KeyCam that gives people the same view of Fort McHenry that Mr. Key saw.

Much of the funding is focused along The Star-Spangled Banner National Historic Trail, a 560-mile route tracing the paths of British and American forces in Maryland, Virginia and Washington, D.C.

On Maryland's Eastern Shore this Sunday, a $93,000 grant is subsidizing the re-enactment of the Battle of Caulk's Field on one of the war's most pristine battlefields.

There, a local militia repelled marauding British troops without help from American soldiers. Among the 14 British killed was Sir Peter Parker, a cousin of the poet Lord Byron, who wrote an ode in his relative's honor.

Even many locals don't know that history, said Bernadette Bowman, director of the Kent County Office of Tourism Development. "This is the forgotten war. We weren't taught this," she said.


Reposted from the Wall Street Journal

Write to Scott Calvert at scott.calvert@wsj.com