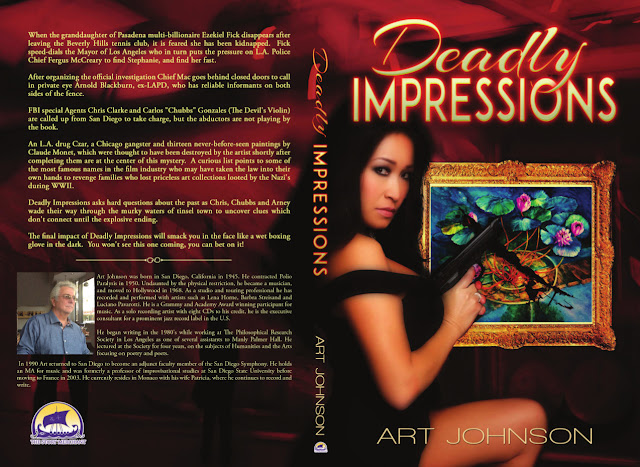 His new novel begins with the kidnapping of Pasadena billionaire Ezekiel Fick's granddaughter.   Enter ex-LA PD Lieutenant Arnold "Arney" Blackburn who has become a private eye since his dismissal from the force.  The abduction is not following the rule book and an LA drug lord, a Chicago gangster, and a host of Hollywood's " A " list are all potentially involved.

Eighty year old Ezekiel Fick hides a life changing secret in his past. His uncle Roderich a preferred architect of Adolf Hitler left him a fortune in impressionist paintings by none other than Claude Monet, works that were thought to be destroyed nearly a century ago.

Tensions mount as Arney joins forces with FBI agents Chris Clarke and Carlos "Chubbs" Gonzales, (The Devils Violin) to weed through the overgrowth of the Hollywood Hills in search of the missing girl. But who are her real abductors?  Even PI Arney Blackburn is completely baffled by the time the final curtain falls. He never saw this one coming.

Deadly Impressions pits ghosts from the past against those phantoms in control of the present to weave a haunting story that will stay with you long after you close the cover.