Author and psychotherapist, Dennis Palumbo, Comments on the Psychology of the Hollywood Beard 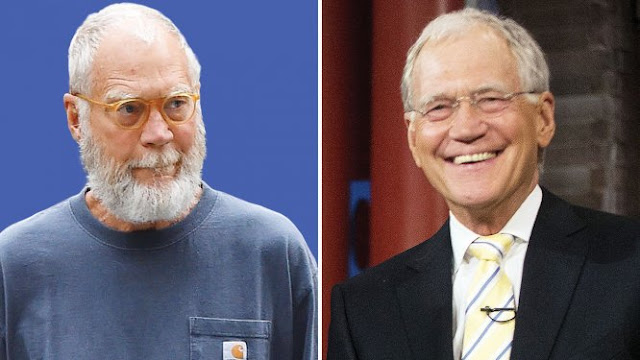 Whether they're used to signal a new phase (Letterman's "retirement beard") or personal hiccup (Ben Affleck's "breakup beard"), chin whiskers come with their own semiotics. Says Jimmy Kimmel: "When David Letterman would come back from vacation with a beard, I always felt betrayed because I didn’t like that he had a personal life."

David Letterman's " retirement beard," spotted in full gray, bushy glory on Sept. 28 in Manhattan, announced more definitively than any press release that the CBS host had left the Late Show building for good. The strangely Middle-earthian whiskers went viral, tickling the Internet, which spewed judgments on how the 68-year-old — who had been hosting a late-night show for 33 years running — had let himself go. One superfan gave a thumbs-up, however. "I will have the same beard when I go off the air," Jimmy Kimmel — who, upon his return to the Live! desk this summer, debuted his own swarthy beard to decided acclaim — tells THR. "It will be growing down to my knees; people will expect me to bring presents down chimneys." As to the reason his idol underwent such a drastic style change, Kimmel suggests that growing a beard signals a switching-off of a public face: "When David Letterman would come back from vacation with a beard, I always felt betrayed because I didn't like that he had a personal life."

In Hollywood these days, a beard is not just a beard. Sometimes, as Kimmel theorizes, it symbolizes a transition. Says industry psychotherapist Dennis Palumbo: When someone retires or "a show is canceled or on hiatus, you can finally just relax and grow your beard if, as a performer, you've always been clean-shaven," he notes. This year, television actors who have sprouted hiatus beards include The Big Bang Theory's Johnny Galecki and Modern Family's Ty Burrell. "A beard is a new look, a new role that's out of character, showing a different facet of your personality. Performers love a new role," adds the Sherman Oaks-based shrink. Casting directors might now look differently at Jamie Dornan, whose heavy whiskers at the Golden Globes were seemingly grown to obliterate any memory of the slick Christian Grey, while the Chrises, Pine and Evans, sported face fur that obscured wholesome hero miens at the Oscars. Observes hairstylist Anna Bernabe, whose Hollywood clientele includes such bearded stars as Liam Hemsworth and Michael Fassbender: "I think it's a way for a guy to express personality and try something new when he's between jobs. It's a switch-up from the clean-shaven Mad Men look, a different angle on manliness."

Meanwhile, after a grueling awards-season campaign, 2014 winners Jared Leto and Matthew McConaughey grew — and kept for nearly a year — wild and woolly post-Oscar beards. Comedian Patton Oswalt compared the latter's look to a "rail-yard hobo," while the former paired his bristles with a prominent man bun. "Beards may also signal a regression, a return to rebellious adolescence," says Palumbo, who has been treating Hollywood patients for 28 years. "If you're wearing a beard, the point being made is one of rebellion against the responsibility and obligations that the actor may feel in his public role. Beards reflect the anti-authority illusion of personal autonomy and authenticity, harking back to a time when the performer was free of expectations of how he should look, or how he's always been seen."

Beards have their dark sides, too. Conan O'Brien grew a full one during his self-described depression fol­lowing his firing from The Tonight Show in 2010. Ben Affleck's breakup beard after the announcement of his divorce from Jennifer Garner did laps around the web. And in March, Jon Hamm showed up post-rehab at the Mad Men premiere in a white dinner jacket with clear eyes and a salt-and-pepper beard. "On a deeper psychological level, people in the public eye who are going through a divorce or scandal, or whose most recent movie bombed at the box office, are perhaps trying to break free of their well-known personal or professional images, now suddenly exposed to the embarrassing glare of the media," notes Palumbo. "In other words, they're hiding. Beards throughout history have been a disguise, a way to hide in plain sight."

Of course, some beards are purely professional. Directors' beards are practically an industry ritual. "With a beard, suddenly Jon Stewart is not the wisecracking former talk show host, but a director and producer," says the therapist. "It seems that any time an actor or writer wants to direct a film, they'll often grow a beard." He warns that beards are "an assumption of authority for artists only. You're never going to see Les Moonves wear a beard as the head of a network — it doesn't look serious."

Other notable recent beards cultivated in the line of Hollywood duty: Kit Harington's growth inspired rounds of "Is Jon Snow really dead?" speculation following Game of Thrones' season-five finale. Leonardo DiCaprio's The Revenant production beard, worn for an extended period to cover reshoots, juiced nasty rumors of it housing fleas, while Indianapolis Colts quarter­back Andrew Luck pronounced his whiskers "lucky" in an insurance commercial that aired during NBC's Sunday Night Football. Then there's Jay Leno's bald-headed, hairy-chinned Uber-driver disguise, donned as a viral marketing stunt to promote his CNBC show Jay Leno's Garage, premiering in the 10 p.m. slot on Oct. 7. Referencing the recent outcry over the dearth of women and people of color on late night, Kimmel jokes: "They talk about diversity in late night, and it's about time that had something to do with facial hair."

Regardless of whether the beard is grown for transformation or disguise, for professional or personal purposes, "it's not like the actor is aware of unconscious motivations," says Palumbo. "As far as he's concerned, he's just a guy growing a beard. And no doubt feeling extremely cool doing it."

When growing a beard, patience is key, says Jason Schneidman, a groomer who has tended to the whiskers of Hugh Jackman and Nikolaj Coster-Waldau. "It takes 10 days of growth — then I can see the change in my clients. We can decide whether to keep going — or not," he says. Schneidman starts out with an evenly clipped face. "I determine it by eye. If a guy has a narrow face, then it's great when [the beard is] fuller; if the guy's face is very square, [the beard should be] a little pointier."

Liam Hemsworth and Michael Fassbender's groomer Anna Bernabe says that today's chins sport a more natural, less "coiffed" look: "The perfectly shaped beard has peaked. Sometimes you see the line around the neck and it's distracting — I don't want to be noticing the beard before I notice the face." Says men's groomer Cathy Highland, who works with Benedict Cumberbatch: "What's current is longer, fuller beards. A little stubble from a week's growth is looking dated now. It makes you look like a soap star, not hip and cool."

The beard boom has led to a new grooming category, with "so many great specialized oils, soaps and face washes," says Schneidman. There are at least a few steps to bearded skin care, including shampooing and conditioning (Highland prefers sulfate-free Clean Everyday shampoo, $20). "One thing guys forget is to moisturize underneath their beards because the skin is covered up. On some men, it starts to get dry and flaky," says Bernabe, who recommends Tom Ford's beard line. But "if you're not fussy, you can buy an Ace comb from the drugstore and comb it. Use a natural oil and with your fingers run a little through your beard," she says.

In true Hollywood fashion, if a man can't grow it naturally, cosmetic surgery can help. Beard transplants, usually done with hair taken from the back of the head, can run $10,000 to $15,000 and take one to two weeks for recovery. Beverly Hills' go-to beard-transplant surgeon, Gary Perrault, whose clients range from industry execs to Middle Eastern potentates, says that many of his patients are "actors who want to achieve a certain effect, and maybe their beard was too patchy" or they wish to look more mature. "A lot of patients are young men who don't have facial hair," he says. "It's a small part of our practice and not really growing, but maybe it will," he says, noting that the procedure makes up 10 to 15 percent of his current practice. "I'm noticing more people with beards."