For cable networks, holiday movies are the gift that keeps on giving

Even Ebenezer Scrooge might have been impressed with how TV networks are profiting from holiday movies.

Along with early displays of decorations by retailers, the continuous loop of holiday music on radio and the festive color of Starbucks coffee cups, nothing rings in the season quite like the volley of holiday movies that flood the small screen. 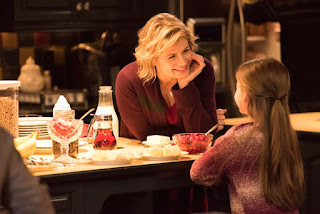 Hallmark and its Hallmark Movies spinoff, for example, are showing 21 new original Christmas-themed movies this year, up from just 13 in 2010. Lifetime has seven of its own, and the Atlanta-based cable TV channel UP TV has three in its bank, in addition to returning holiday movies of years past.

These holiday movies are proliferating because they're cheap to produce, generate strong ratings and lots of advertising revenue for the television networks. Hallmark parent Crown Media Holdings credited its holiday programming for helping to spur an 11% increase in advertising revenue last year to $328 million.

"Advertisers are attracted to eyeballs," said Jason Maltby, head TV buyer at the prominent advertising agency Mindshare. "There's the added benefit that holiday programming tends to be upbeat and positive, and you're always looking to put your brand message in an environment that makes people feel good."

The television channel guide is littered every year with festive titles such as "Murder, She Baked: A Plum Pudding Mystery," "The Flight Before Christmas" and "Elf" as dozens of original and acquired movies, as well as a long list of specials, roll out on cable, broadcast and streaming networks in November and December. In some cases, the Yuletide ringing started on Halloween.

Broadcast networks rely more heavily on specials and perennial favorites such as "It's a Wonderful Life" and "A Charlie Brown Christmas," which celebrates its 50th anniversary this year.

But the surge of holiday programming is more apparent on cable, where networks such as Hallmark, Lifetime, ABC Family and the small channel UP can dedicate weeks, or months, of programming to the genre.

The holly jolly is working. ABC Family saw its ratings double last year in the holiday period that encompassed the week of Thanksgiving through the first week of January, according to Nielsen. 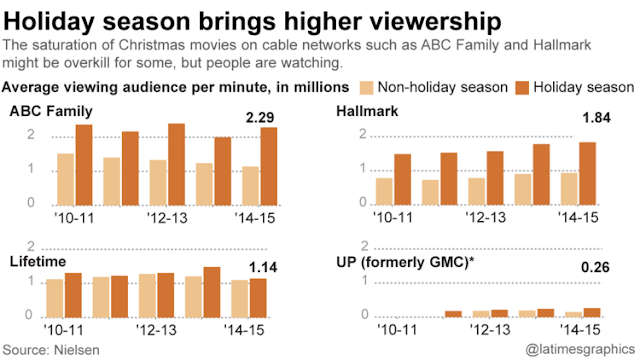 The network's programming block, dubbed "25 Days of Christmas," is more heavy on acquired movies such as "The Polar Express" and "Dr. Seuss' How the Grinch Stole Christmas," as well as the occasional holiday-themed episode of its original series. The block has proved to be such a key tent-pole event through the years that in 2007 the network launched a supplemental block, "Countdown to 25 Days of Christmas," for November.

"The holidays are one of the biggest times of the year for families all across the country," said Salaam Coleman Smith, ABC Family's executive vice president of strategy and programming. "There's been such a wealth of Christmas movies and programming that have been created over the years … [that] we really felt like there was a unique opportunity to create this stunt that featured the best of Christmas content. There's something for everyone."

"Viewers are really rabid for this content," said Michelle Vicary, executive vice president of programming for Studio City-based Hallmark Channel and Hallmark Movies & Mysteries. "All we hear every year is that people want more of it."

Additionally, these programs are good investment for cable channels because they are inexpensive to produce and are evergreens, returning for years to come. These two-hour movies cost about $1 million to $3 million to produce, which is equivalent to the cost of producing one episode of an hourlong drama on cable.

TV movies on the Big Four networks have waned in recent years as broadcasters have preferred long-form series that keep viewers engaged over an expanded period of time. That has created an opportunity for some cable networks to become the main suppliers of holiday movies.

The investment in made-for-TV movies is a less risky one on cable because the platform allows for repeated plays the year that a movie debuts and beyond.

The holiday movies are popular in part because they follow a simple formula: a Scrooge-like character discovering his or her Christmas spirit; someone stranded while trying to get home for the holidays; and, of course, the heartwarming romance.

There's also a growing roster of talent eager to star in holiday movies. Actresses such as Candace Cameron Bure, Beverley Mitchell and Lacey Chabert have become mainstays of the genre.

"It makes me giggle," said Cameron Bure, who this year stars in "A Christmas Detour" on Hallmark. "I will wear the title proudly. I get so many messages from people saying, 'I hope you have a new Christmas movie coming out.' I love that people know me from those."

"The stigma of doing cable TV Christmas movies has really diminished in the last few years," said Tim Johnson, the producer of Lifetime's "Becoming Santa" and "A Gift Wrapped Christmas." "Ten years ago, it was harder to get actors to do it. Now we're getting calls from agents saying, 'We have this client who wants to do a cable Christmas movie.' They know the audience is there."

Of course, the flood of holiday dramas could reach a tipping point. But for now at least, they are ratings gold for some networks.

Planning has already begun for next year's slate and beyond, and expansion in the number of hours dedicated to the programming and/or the number of original TV movies is expected. Hallmark, for one, is looking to increase its output of originals to 28 in 2018.

"The demand is there and the suppliers are there and there's room for more," said Dan Angel, an executive producer of "The Bridge" on Hallmark. "We just have to keep up."

Reposted from the LA Times