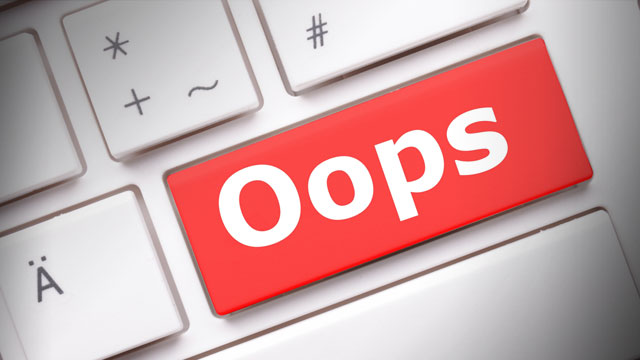 How to make a correct use of punctuation could certainly be the subject of a whole other blog post, so here we’ll just focus on the three punctuation misuses our editors note most often.
Using a comma to set off a dependent clause

Authors often place commas where they don’t belong, including before a dependent clause.

By far, the most common writing mistake I’ve encountered when editing books by professional authors is the use of a comma to set off a dependent clause in the middle of a sentence. For example: “He stepped through the doorway, and took her in his arms.” In this case “and took her in his arms” is not an independent clause. It depends on the first half of the sentence in order to make sense. Therefore, a comma should not set it off. – Nikki Busch

Using the semicolon as a comma — and vice versa

Authors tend to fall into one of two categories: Those who overuse the semicolon, and those who eschew it entirely.

Semicolons are a powerful mark of punctuation; they denote the continuation of a thought from one sentence to the next and suggest the clauses are so interconnected that the second can’t be understood outside the context of the first. (See what I did there? If you hadn’t read the first sentence in this paragraph, the second sentence — after the semicolon — would lack context.) Semicolons are also used to separate complex items in series, meaning a list of items that itself contains commas. The example I give most often involves the sandwich types you might bring on a picnic: Peanut butter, honey, and banana; turkey, brie, and red pepper jelly; and tuna salad. The three sandwich types are “complex items” because each contains commas. If we don’t use semicolons, we risk confusion — and a very disgusting lunch. – Rebecca Heyman

Hyphens (-), en dashes (–), and em dashes (—) technically only differ by the length of the dash. In a sentence, however, they couldn’t be more different.

Hyphen: “I have a blue-green sweater.” The hyphen here is used to amalgamate or mesh the two colours into one.

En dash: “Would you say this sweater is blue – or green?” The en dash is used for pause or emphasis.

Em dash: “The sweater could be called blue — the blue of the sea or the sky, or green — the green of the forest.” The em dash is also used for pause or emphasis, mainly by US writers, and for me it has literary overtones. Something about the length makes it look elegant and thoughtful in a sentence.

As for the semicolon above, these are not strict rules; I’d rather call them narrative opportunities! – Philippa Donovan

Most people know to watch out for participles, but any modifying phrase “dangled” at the front of a sentence by a comma can become ungrammatical if not worded properly.

Without a doubt, the most common grammar error I see is the misplaced dangling modifier. Here’s an example that was published in my community newspaper:

“As a disillusioned high school drop out, the structure of martial arts helped turn Frank’s life around.”

A lot of authors get too creative with their dialogue tags. Though “said” and “asked” lack originality, they have the advantage of being “invisible” to the reader. It’s better to stick to basic dialogue tags to prevent drawing the reader’s attention away from the actual dialogue.

Ideally, dialogue should be strong enough not to need to be supported by eye-catching tags like harrumphed, guffawed, or squealed. Equally, it’s technically incorrect to use anything but synonyms for said, so “he smiled,” “she raised an eyebrow,” or any other facial expressions are off the agenda unless the punctuation clearly separates dialogue from description. For example: “I’m so glad I discovered BookBub!” The author clapped her hands in glee. “What would I do without it?” – Bryony Sutherland

4. Inconsistencies in names and spelling

While it’s typically the copy editor’s job to pick these up, authors should watch out for inconsistencies when revising.

Authors hold about thirty versions of a story in their minds. One of the mistakes that can creep in is a name or background tweak that isn’t picked up consistently throughout the story. Readers can get baffled by a new name popping in that hadn’t been there before! True, find and replace can help with this, but it’s not always accurate, as we all know. Looking at all names — and spellings — before final publication is useful. Use the Edit > Find/Replace feature to search for old names and spellings and make sure none have slipped through the cracks. – Mary-Theresa Hussey

Even for the most experienced authors, it can be difficult to maintain tense consistency throughout a manuscript. Whether past or present is a novel’s main narrative tense, stick to it even in flashbacks.

Inconsistencies in verb tense tend to appear more often in novels written in the present tense, with authors often accidentally slipping into the past tense. – Angela Brown

The most common mistake I see from authors of all experience levels are issues related to tense. For example, many manuscripts I read may start in the past tense and, in a moment of flashback or action, flip abruptly to present tense. – Lauren Hughes

We all have a few words that we never seem to be able to write correctly. It’s good to be aware of them, since a simple find and replace will often do the trick. Oxford Dictionaries has compiled a list of likely candidates here.

Conjugating the verb “lie” also proves problematic for nearly every author. Does Jim lay down? Does Jim lie down? Was Jim lying or laying on the ground? In this post, Grammar Girl gives some terrific tips for when to use “lie” versus “lay”. – Angela Brown