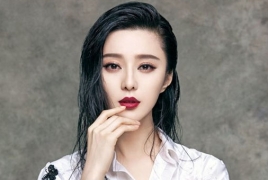 Chinese actress Fan Bingbing, who appeared in X-Men: Days of Future Past, has joined Jason Statham in Meg, the creature feature being made by Warner Bros. and Chinese company Gravity Pictures, The Hollywood Reporter reveals.

At the same time, Warner Bros. has set a March 2, 2018, release date for the pic, which will be directed Jon Turteltaub, best known as helmer of the National Treasure movies. Gravity will distribute the film in China, while Warners will release it throughout the rest of the world.

Dean Georgaris wrote the latest script for the project, which has been swimming upstream for 20 years in order to adapt the book by Steve Alten. It centers on a Carcharodon Megalodon, the 70-foot, 40-ton prehistoric kin to the great white shark.

The studio put forth the plot of Meg as such:

An international underwater observation program, led by Chinese scientists, is under attack by an unknown danger, and its deep-sea submersible lies disabled and trapped at the bottom of the Mariana Trench. With time running out, former Naval Captain and expert deep sea diver Jonas Taylor (Statham) is recruited by Dr. Zhang Suyin, lead oceanographer of the program, for what is likely a suicide mission.

Years before, Taylor had encountered this same terrifying threat, which forced him to abort his mission and abandon half his crew, resulting in disgrace and a dishonorable discharge. Now, Taylor must confront his fears and risk his own life to save everyone trapped below … bringing him face to face once more with the apex predator of all time.