"This is a story that most adult women will love. The author does an excellent job of bringing forth the characters of this young woman and man and then elaborate, thorough descriptions of the countryside, the weather and the plants. I was enthralled with this story."   5 Stars

By Joan A. Adamak, Joan's Musings 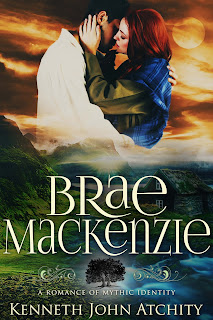 This book encompasses a beautiful love story and it is like a travelogue of Scotland, for those of us who have never been there. Brae MacKenzie is a successful San Francisco painter, who seems to have it all, but because of family losses during childhood, cannot find happiness within herself, especially after her charismatic husband suddenly dies. She is left with a son, but she has always felt a sense of loss and longing since childhood. Her artistic passion hasn't filled that void, and with the untimely death of her husband, the old pain resurges and her depression becomes deeper and deeper. Brae's father senses his daughter's pain and before she embarks for an exhibit in England, he hands her a family heirloom hidden away for years...a letter with a treasure map, which says: "Since you are still among the living, your heart is not broken...follow the map to Scotland." The London exhibit, in its ultra-chic hollowness, prompts Brae into taking the advice of that bewildering letter. She hops a train for Glasgow. When her train emerges in an ancient Caledonian forest, Brae is pulled enough out of her depression to feel something and she stops at the next station.


She is met by Damon, a well-built young Scot, who although a stranger to her, yet seems to know her. He becomes her personal guide into the myths and history of Scotland, including identifying all of the fauna, and takes her on a trip by horseback around the country, setting up camp, cooking and protecting her. But he doesn’t say much, doesn’t seem to want to talk, is rather withdrawn and dour. She gets accustomed to it and begins to look outside of herself. They travel much of Scotland to the ocean and as time passes, Brae begins to feel again and find some joy and beauty in life. She has inherited her grandmother’s house and lands on the edge of the ocean Damon becomes friendlier and even laughs with her sometimes. He explains her deceased grandmother’s life, and finally admits to her that he will never marry because he is sterile and he wouldn’t burden any woman with that. But she has a child, she realizes that they are falling in love and that he will never make a move, so she does and he responds. Her travels and kinship with him bring out the best in her and in him.