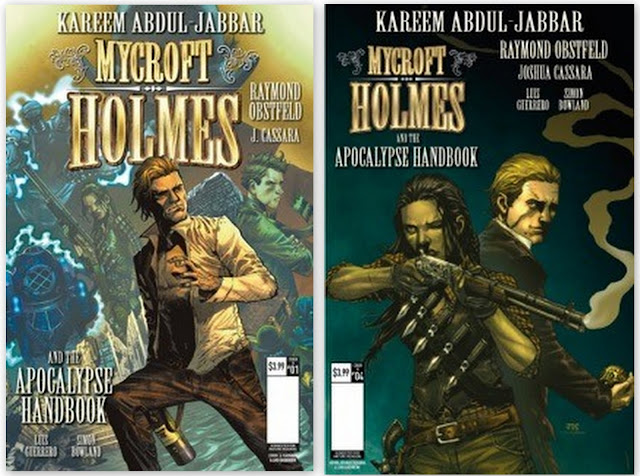 Basketball legend, novelist, and superstar polymath Kareem Abdul-Jabbar brings his take on Sherlock Holmes' older brother to comics at last! An all-new adventure set in the world of the bestselling Mycroft Holmes novel, The Apocalypse Handbook, sees the diffident, brilliant Mycroft pulled into a globe-spanning adventure at the behest of Queen Victoria and a secret organization at the heart of the British government.

A madman is on the loose with civilization-destroying weapons, each two hundred years in advance of the status quo. Can the smartest man in England set aside his idle, womanizing ways for long enough to track down the foe that may be his match?

"I actually gasped aloud at several points, when I wasn’t cackling with laughter, the dialogue and personalities are just so on point and so well supported by the art that this was a joy to read."

"This is a great issue to start off a series that is going to be full of adventure and intrigue. Our protagonist is, thus far, really interesting. His intelligence resonates really well, and is almost mesmerizing. The creative team on this series has done an amazing job so far, and I can’t wait to see where things go from here!"

"Mycroft Holmes and the Apocalypse Handbook #1 is a sensational start to the series combining an intriguing story setup with entertaining character development and action. It’s an engrossing issue from the first page to the last due to the smooth writing and beautiful visuals. The way the attack on the British museum unfolds sets the tone early, and the focus on Mycroft’s behavior makes him feel like a unique character while leaving room for some serious growth. I know it’s only one issue but at this rate this series could easily become one of my favorites. I highly recommend it."