A Tribute to the Printer Aldus Manutius, and the Roots of the Paperback [via Doug Fetterly] 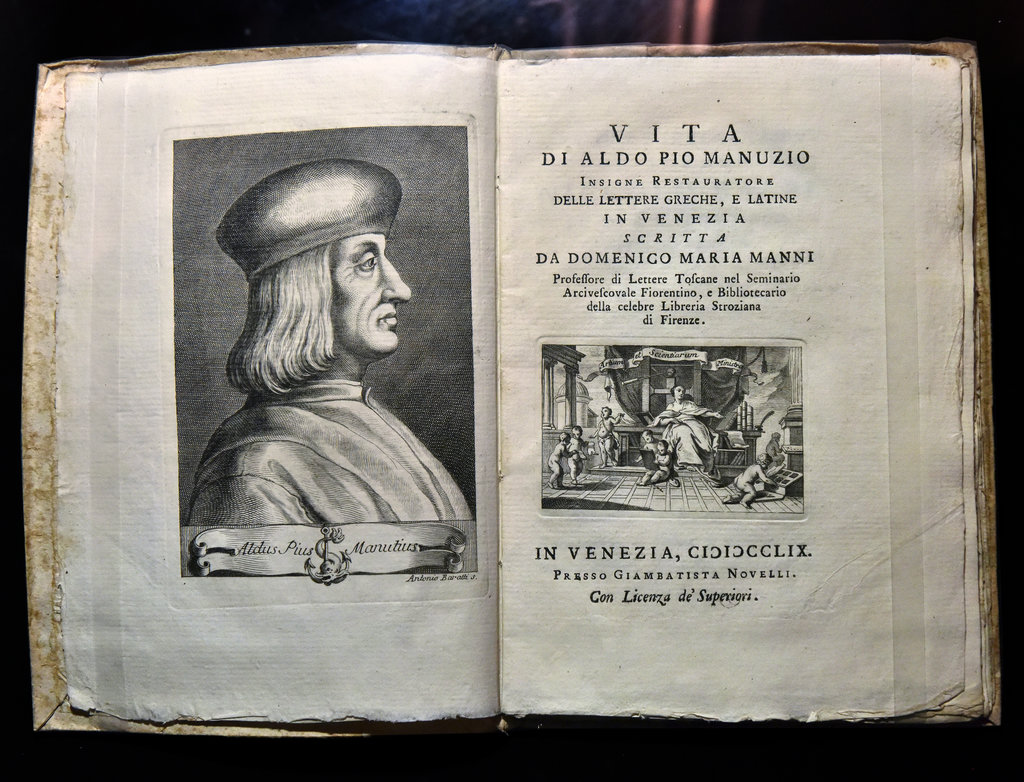 CURIOUS strollers in early-16th-century Venice might have paused by the shop of the great printer Aldus Manutius only to be scared off by a stern warning posted over the door.
“Whoever you are, Aldus asks you again and again what it is you want from him,” it read. “State your business briefly, and then immediately go away.”

To state the current business at hand briefly, Aldus is the subject of a new exhibition commemorating the 500th anniversary of his death — and the birth of reading as we know it.

Aldus has attracted some pop-culture attention in recent years, at least among those with a geekish taste for printing history. The novel “The Rule of Four” gave his most famous book, the enigmatic “Hypnerotomachia Poliphili,” an upmarket “Da Vinci Code” treatment in 2004. There was also Robin Sloan’s 2012 best seller, “Mr. Penumbra’s 24-Hour Bookstore,” which turned Aldus into the founder of a shadowy secret society headed for an apocalyptic showdown with Google.

The exhibition that opened this week at the Grolier Club in Manhattan, “Aldus Manutius: A Legacy More Lasting Than Bronze,” gathers nearly 150 Aldines, as books from the press Aldus founded in Venice in 1494 are known, for a more sober tribute. Gutenberg may have invented the movable-type printing press, used to create his monumental Bibles. But anyone who has ever sat in a cafe, or in the bath, with a paperback owes a debt to Aldus and the small, cleanly designed editions of the secular classics he called libelli portatiles, or portable little books.
“It’s become a cliché to call them the forerunners of the Penguin Classics,” G. Scott Clemons, the president of the Grolier Club, said during a recent tour of the installation in progress. “But the concept of personal reading is in some ways directly traceable to the innovations of Aldus’s portable library.”

The exhibition, organized by Mr. Clemons and H. George Fletcher, a former curator of rare books at the New York Public Library and the Morgan Library, is a gallery of bragging rights. Aldus was the first to print Aristotle, Thucydides, Herodotus and Sophocles, among others in the Greek canon. He was possibly the first printer to compare manuscripts to arrive at the most reliable text. He was the first to use italic type. He was the first to use the semicolon in its modern sense.

And then there were the unwitting firsts, like what may be the earliest known version of “This page left intentionally blank,” preserved in a 1513 edition of the Greek orators included in the show, along with instructions to the binder to remove the extra leaf.

“He printed the instructions in Latin and Greek,” Mr. Clemons said. “But of course bookbinders couldn’t read Latin or Greek.”

Aldus, born in the Papal States around 1452, trained as a humanist scholar and worked as a tutor in aristocratic households before taking up printing in the 1490s. It was a moment of upheaval in reading roughly equivalent to our own digitally disrupted age. And Venice was the Silicon Valley of printing, home to dozens of shops locked in cutthroat competition.

The Aldine Press, in its start-up phase, emphasized Greek and Latin lexicons and grammar manuals. In 1495, Aldus began publishing the first printed edition of Aristotle. In 1501, he released the first of his small octavo editions of the classics, books “that could be held in the hand and learned by heart (not to speak of being read) by everyone,” as he later wrote. The show includes 20 libelli portatiles, all bearing Aldus’s printer’s mark, a dolphin curled around an anchor. (The colophon is still used today by Doubleday.) Some of the books were treated as treasures, and customized with magnificent decoration that harked back to the tradition of illuminated manuscripts. Others were workaday volumes, filled with marginal scribbles.

The exhibition also includes examples of Aldus’s larger-format work, including the “Hypnerotomachia Poliphili” (1499), sometimes said to be the most beautiful — and the most unreadable — book ever printed.
The book, a densely allegorical erotic love story attributed to Francesco Colonna, is celebrated for its integration of gracefully shaped typography and elegant woodcuts. But visitors to the Grolier would be forgiven for letting their eyes go straight to the famously excited ithyphallic (to use the scholarly term) god Priapus standing at attention, as it were. The book is displayed cracked open a modest halfway to that page, directly across the room from a 1547 medical encyclopedia open to a passage discussing the uses of cannabis.

“We wanted the show to have both sex and drugs,” Mr. Clemons explained.

Most of Aldus’s contributions to the art of printing are more subtle, like that first italic typeface, which he created with the type cutter Francesco Griffo, a shadowy fellow who broke with Aldus acrimoniously and then slugged a man to death with an iron bar before reputedly meeting his own demise at the end of a hangman’s rope. Italics, which were intended to mimic the humanist handwriting of the day, first appeared in a modest five words in a 1500 edition of the letters of St. Catherine and soon spread to other Aldines, and beyond.

And then there was the roman typeface devised for a 1496 book by the humanist scholar Pietro Bembo — the inspiration for the modern font Bembo, still treasured by book designers for its grace and readability.
“The book itself is almost frivolous,” Mr. Clemons said of the text, which recounts a trip to Mount Etna. “But it launched that very modern typeface.”

The libelli portatiles also attracted less flattering imitations. Aldus, who had secured special printing privileges from the Vatican, was plagued by counterfeiters, despite the warnings on his title pages that those who made unauthorized copies would be excommunicated.

Things got so bad that in 1503 he printed a broadside warning consumers of the telltale marks of fake Aldines, including specific textual errors, low-quality paper with “a heavy odor” and typography that exuded, as he put it, a sort of “Gallicitas,” or “Frenchiness.” (Many counterfeits came from Lyon.)


While putting together the show, Mr. Clemons identified one previously unknown counterfeit, a 1501 Virgil printed on vellum and held by Princeton University. “It was immediately obvious,” Mr. Clemons said. “It was Frenchy.”
Aldus died in 1515, and the press was taken over by his father-in-law and then by his son Paulus. The center of printing had begun migrating north, but the press continued to produce some important editions, including the first printed Greek Bible, the Septuagint, in 1518, and the official proceedings of the Council of Trent.

By 1579, Aldines carried a list of still-available titles printed in the back. “You can almost imagine him looking over his shoulder at the unsold books piling up,” Mr. Clemons said.

In a last-ditch effort to save the press, Aldus the Younger accepted a commission from Pope Sixtus V for a new Latin Bible, only to produce a rush job so riddled with errors — about 4,900, Mr. Fletcher noted grimly — that it was suppressed.

“Sixtus died, and the new pope said, ‘You’ve got to be kidding me,’ ” Mr. Fletcher said. (The book, which includes carefully pasted-in printed corrections, is now among the rarer Aldines.)

The press closed for good in 1597. But Aldines, which survive in the tens of thousands, have exerted an unflagging hold on collectors, from Jean Grolier, the Renaissance bibliophile for whom the club is named, to the two curators, whose personal loans make up the bulk of the show.

Mr. Clemons, a managing partner at the financial firm Brown Brothers Harriman, bought the first of the roughly 1,000 Aldines in his collection while an undergraduate classics major. “It may now finally be worth what I paid,” he joked.

Mr. Fletcher, who acquired the first of his 125 Aldines when he was 16, summed up their allure with what might be called Aldine understatement.

“Aldus was a person with a strong aesthetic sense who was also able to work with common sense,” he said. “This is an almost completely unknown phenomenon, even today.”

Reposted From The New York Times