Ruby Rose: 'I almost drowned' The Australian actress had a near-death experience while shooting her latest role in MEG 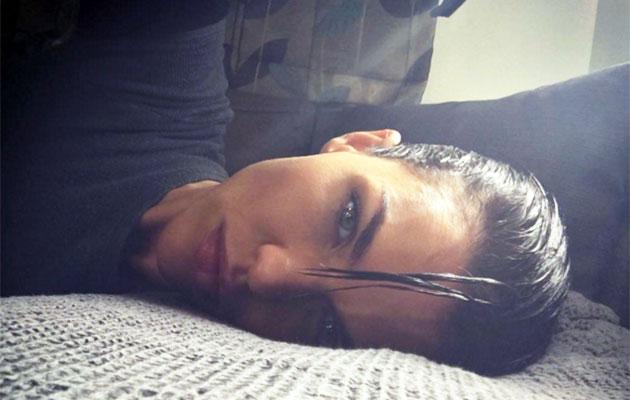 She’s one of the most in-demand action stars in Hollywood, but Ruby Rose’s latest role could have cost her career - and her life.

Be was lucky enough to visit the Australian actress on the Auckland set of her new movie, MEG, only to hear that she had a scary moment during filming of the shark flick.

With her hair slicked back in a wet look from filming a scene in a water tank, Ruby, 30, got real about her terrifying on-set incident.

"I did almost drown the other day," she tells Be during a break from filming. "That was fun."

"It was a very full on scene where I end up in the water and then there's this little bit where Rainn [Wilson] has one thing to do. 'Just one thing, Rainn! I know you were funny in The Office, but you had one job.'

Ruby almost drowned filming scenes for her latest role in MEG, a film about an extinct species of shark that lived 23 to 2.6 million years ago.

Rainn Wilson was acting out a scene with Ruby when she feared she would drown.

"And that one job helps me get out of that whole situation. [The director] John [Turteltaub] thought I was acting, and I was acting for a little bit, but then I really needed them to throw me something to get out of the water.

"[John] was like, 'Just hold, this is great, this is amazing'. And I was thinking, 'This is not fantastic, I'm sinking'."

Ruby went onto explain that Rainn eventually began to cotton on, but then she let it go on for longer to get the shot right.

She recalls: "I then screamed, 'Help!' I did it in my American accent because I thought, 'If this looks amazing, I still want it'."

When the crew finally realized Ruby's struggle, they got her out quickly. But being the legend that she is, Ruby says she got right back in the water to do another take. Jeez!

After Ruby's incident, the crew brought in a safe word for any future mishaps.

"It's Ruby!" the actress tells Be. "Because you can't say anything longer than that when you're choking water up."

The role, which sees the star going up against a giant Jurassic shark called a Megalodon, is bound to be taxing. So we asked her how she prepares mentally and physically for that kind of role.

"Compared to the other three [film] roles I've done, physically it hasn't been as taxing," she explains. "There are a few bits where I have to go on a stroll - a very fast stroll and I get to swim, and it's cold. But that's fun."

But while the role doesn't sound too demanding, after all, she does have a body double, Ruby says she's still wrapping her head around how to act out some of the physical stuff - like pretending to be on a boat.

"I haven't really got that part down part yet," she confesses. "The good thing about this film - I've been lucky on all of my films actually - is that we do use some sets but we also go on location.

"So being on an actual boat in the ocean and being able to shoot scenes there [means] we're not having to think, 'What's it like being on a boat?'


"We know what it's like, having spent three or four weeks on sea. And it's a good mix because I love being on location, especially in New Zealand."

Speaking about her role in the film, Ruby says she’s basically the biggest nerd in the movie.

“Her name is Jax [and] she has really cool hair,” she explains. “She’s the engineer on the vessel and she basically designed all of the equipment and technology that everyone is using. She’s a very smart, scientific gal.”

To transition for the character, Ruby says she didn’t have to cover her tattoos at all – in fact, she had to enhance them.

“I have fake tattoos covering my real tattoos,” she tells us. “I wanted them to be more themed to the film.”

“This one here is an octopus,” she tells while pointing at her arm etchings"

Wow. Now that she's pointed it out, Ruby really does have a Jolie vibe!

The Melbourne-born star, who rekindled her relationship with The Veronicas Jess Origliasso while shooting the film, went on to say how great it was being closer to home. Ruby and Jess, who originally dated in 2008, rekindled their relationship in New Zealand after shooting a new music video for The Veronicas.

“I’ve visited [mum] a couple of times so that’s been great,” she says. “And I keep forgetting I have friends here and they’ve come and visited me.”

But while filming at New Zealand was the reason why she and Jess rekindled their on-again-off-again relationship, Ruby says there was one thing she didn’t like about working there.

Because of the strict quarantine laws of Australia and New Zealand, the actress wasn’t able to bring her pet dogs Down Under.

Well, we wouldn’t want another Johnny Depp and Amber Heard incident, would we?!

She says: “The one bummer about being in Australia or New Zealand - which I am totally onboard with and I totally agree with it – is that you can’t bring your dogs.

“I totally understand why, but the one thing I miss most when I’m traveling or doing films, is my dogs.