After reading your book, Cajun Household Wisdom, I wanted to do an interview with you. I found the book very humorous as well as informative. Through the sayings, photographs, and stories the reader gets a genuine glimpse and flavor of Cajun culture and a lot of laughs. What motivated you to write the book?

As I grew around my mother’s French Louisiana Family on a farm near Eunice I started collecting sayings and stories I heard from family members and other people in Louisiana. Especially the hunting stories and jokes my uncles told. I’ve always thought that the Cajuns have a unique way of looking at life and wanted to put it together in one place.

Let me mention some subjects and let you give an explanation of what they mean in Cajun culture. 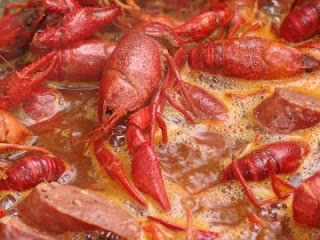 Cajuns are people who enjoy every moment of life. They aren’t city planners, architects, or engineers. They’re country people. Their thing is living in the moment. The greatest celebration of the moment on a daily basis is meals. Cajuns have an incredible zest about eating and putting their energy into food. They love texture, which is why they like spicy food and all kinds of food that has a lot of surface to it. Cajun philosophy center around the kitchen and around eating. As far as Cajuns are concerned, if you haven’t eaten with someone, you don’t know them.

Dancing is another example of living in the moment and celebrating life. What’s amazing when you go to Louisiana is that you see the oldest people dancing. People in there nineties will be out in the dance floor kicking up a storm. People of all ages go to the dance halls. So the dance hall is another place where Cajun culture comes together to celebrate the energy of life. One of the famous clubs is Fred’s in Mamou. If you walk in at 11 o’ clock on Saturday morning you’d find the place already hopping. The truth is that it’s all the people from the night before who are still there. Since there are no windows in the place no one has any idea or cares what time it is. 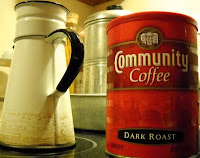 Jokes, stories, and conversations are all a celebration of life and obviously the best place to do that is over a meal or a cup of coffee. Coffee is a central part of Cajuns culture. It’s a time to stop and talk. You don’t drink coffee while working. 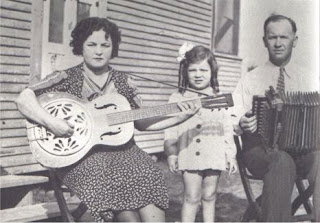 Cajuns like to talk and tell stories. One of my uncles in Louisiana still resents the telephone. He thinks that if people want to talk with you, they should drive over to your place. Then you’ll know it’s important and you’ll stop what you’re doing to have a talk.

As a kid I remember sitting on the front porch in rocking chairs and endlessly listening to my uncles, grandfather, and grandmother telling stories and talking. That’s what I go home to Louisiana for now. I need the fix- to be with people who know how to talk.

One time I went on a fishing trip with my Uncle Wib. We got up at three A.M. to go down to Grand Isle and we never stopped talking. We were supposed to get there by sunrise. At 10 o’clock I pointed that out. He said ‘Oh my God, I took the wrong road at Thibodaux five hours back.’ We were so deep in conversation that we forgot about everything else.

To Cajuns nothing is more important than communication. We get so busy in our modern world that we don’t really have time to talk with each other – everything is oriented toward efficiency and arranged in bytes. Just enough is said to get by. But to Cajuns talking is an art.


What is your next Cajun book?

It is similar to Cajun Household Wisdom except it’s about the kitchen and eating. It’s called Cajun Kitchen Wisdom and has recipes for smothered chicken, lima beans and lots more. It contains sayings that have to do with the kitchen. One is “If de gumbo is good, you can put up with de cook.’ It also presents fishing and farming stories. The thing about Cajun humor is that much of it is about fishing or farming stories. The White Mule stories are prime examples of farming tales.

One of my favorite White Mule stories will appear in the next book, Cajun Kitchen Wisdom.

It goes like this: A stranger walks into a bar in Abbeville and takes a seat. Halfway through his Jax, he pulls a huge tomato out of the paper bag he carried in, and sets it on the counter. The bartender sees him do it, but doesn’t even stop wiping his glasses. The man at the other end of the bar doesn’t come over either.

The other two men nod.

“Sacre blue du couyon,” the stranger says. “Have you ever seed a tomata as dis heah?’

The other two men move over politely to take a closer look. The man who was at the far stool lifts the tomato, palms it, smells it, rubs it, smells his finger, then puts it back on the bar. The bartender doesn’t even bother to do the same. He just exchanges glances with the other man.

‘Well, ah foh one siurley have,’ says the man from the other stool.

The stranger can’t believe his ears but the other man tells him to wait. He goes outside, then comes back in, straining as he carries the biggest, most gigantic tomato the stranger’s even seen in his life – it has to weigh over ten pounds! The man places the tomato on the counter, and the stranger can’t resist touching it, smelling it, stroking it’s skin. Sheepishly, he puts his tomato back into its bag.

“Did you see dat white mule tied up outside?” the other man asks.

“Everybod ‘roun heah knows about it” – he looks at the bartender, who nods for confirmation.

“How much you recon’ you wan’ foh dat mule?” the other man breaks in.

“Ah’ll give you a hunnert dollars cash for dat mule raht now,” says the stranger, plunking the gold coins down on the counter.

The other man looks at the coins for a second. “A hunnert dollars?” he says.

The stranger’s jubilant, but the man who sold the mule says, “Would you min’ if ah deliever him ta you in the mohnin? Dat mule was mah fren,’ and ah’d lake to let mah wife ‘n kids say good-bye to him properly.”

“No problem,” says the other man, and leaves the bar whistling.

But the first man got himself a real run of bad luck. First of all, he stays at the bar and gets caught in a bouree’ game- and lost the hundred dollars. Second of all, when he wakes up the next mroing, and went to his barn to get the mule ready to deliever he finds the mule dead as a doornail on the barn floor.

He felt real bad about that, real bad- especially because he didn’t have the hundred dollars to repay the stranger. But after awhile he got to thikin’ and realized that, as the saying goes, “a deal is a deal.” So he loaded the mule on his wagon, and headed for the other man’s farm. He parked the wagon down the road a bit and walked up to the house, where the man was waiting for him on his porch.

“I got some bad news for you, an’ some moh bad news,” the first man says.

“But the other bad news is dat the mule you bought – ah found him daid in mah barn dis nohnin.”

Now the stranger understood the gravity of the situation all too well, and why the first man felt so bad. But he got to thiking, and realized to himself, “a deal’s a deal.”

“Let me axe you a question, he finally said. “Whar is dat mule?”

The other man pointed down the road to the wagon. The stranger followed him so he could see for himself. After he was satisfied that it was the same mule he’d bought at the bar he helped the other man unload the mule.

The first man said again how bad he felt about the whole thing, and drove off home with a heavy heart.

A few months went by before the first man had the nerve to go back to that bar in Abbeville for a Jax. But one night he did, and there was the stranger.

“To tell ya de trewty. Ah felt so bad ‘bout losin dat money and dat mule dying an’ all, I didn’t have de noive ta see you again.”

“I held me a raffle and made me a good profit.”

“You raffled off dat daid mule, and you made two hunnert dollars?” The first man was amazed, “and you had all dose folds mad at you?”

“No,” the stranger smiled. “Jes’ one poison was mad yah. But ah gave him his money back!” 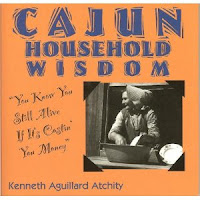 Kenneth Agillard Atchity is the author of several books including Cajun Household Wisdom: You Know You Still Alive If It’s Costin’ You Money published by Longmeadow Press. At the time of this printing he’s somewhere between Breaux Bridge and Opelousas eating his way across his native state.