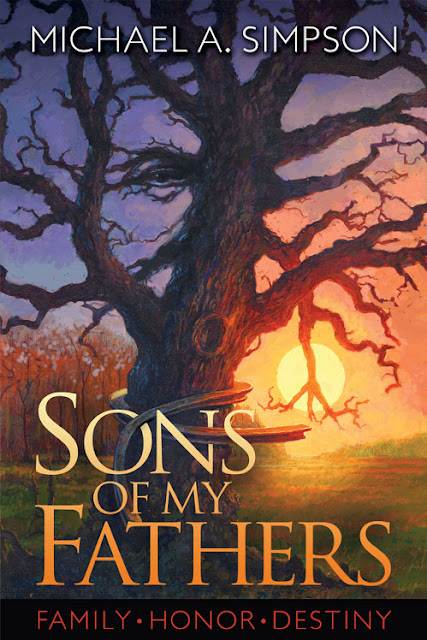 Synopsis:
Sons of My Fathers, based on the true story of author Michael A. Simpson’s family, is a multi-generational journey that intertwines two dramatic stories set one hundred years apart—the heroic saga of 19-year-old Ulysses Simpson who, when "hell comes to Georgia," joins his father on a course of revenge, a path that will forever change the destiny of their clan. And the true tale of another young Simpson man six generations later who, despite his moral reservations, enlists in the U.S. Army, following in the footsteps of his father who was a WWII Marine Corps combat veteran and one of the legendary fighting force's elite instructors during the Korean War. When Ron volunteers as a "walking dead"—the term for those who fly unarmed medevac helicopters during combat because of their high mortality rate—but is instead assigned to fly a Huey gunship, he fights a personal war with himself over whether to keep a century-old family oath. As his brother Michael comes of age and experiences his first love, Ron's fateful decision forces him to confront his family's past and risk sacrificing his own future, an act that ultimately sets a landmark precedent for "soldiers of conscience" who would follow him in military service. Deeply personal and compellingly written by the younger brother in this story, the book is uniquely set against America's involvement in two great civil wars—our country's own conflict in the 1860s and Vietnam in the late 1960s. It is an evocative journey into the author's family history and the universal themes central to it—the bonds of family and star-crossed love, duty versus faith, the true nature of patriotism and conscience in war, and the turbulent end of innocence. Rich in emotional textures, Sons of My Fathers is a transformative and timeless coming-of-age narrative.

Other than his mother’s lullabies, the whistle of the Dixie Flyer was the earliest sound Michael Simpson could remember hearing.

Since the time of Baylis Simpson and the Confederacy, the locomotive’s melancholy cry had announced its passage through Forest Park, a quiet Georgia town of hard work and modest dreams snuggled on Atlanta’s southern doorstep. The rail line pierced through the heart of this blue-collar community, running parallel to Main for several blocks before bending south, just before the street emptied out onto Jonesboro Road in front of the Fort Gillem Army base. The road was the same one that Rhett Butler and Scarlet O’Hara used for their imaginary escape from Atlanta. The fictional Tara plantation was said to have been located just a short stride down its blacktop.

Every night of Michael’s young life, the Flyer’s whistle beckoned him, filling his imagination with a long-vanquished landscape of graceful mansions and stately plantations, of hoop-skirted ladies who thought about things tomorrow and men who frankly didn’t give a damn.

Two stories that reverberate the lessons of life through time. A story of love, hate, war and peace. There are real life lessons to be learnt by people everywhere in the pages of this book.

I laughed and cried reading this. It's such a brutally honest book, with some shocking events in the chapters. It was a book I devoured, wanting to hear about the characters and how things panned out.

I loved how determined Baylis was. Also Ron who followed his convictions and saw through the consequences of these, even at a loss to himself.

I haven't read a book like this in a long time that deals with real events, feelings and people, comparing different eras, but showing so starkly how humanity seems to make errors and repeat them.

* A copy of this book was provided to me with no requirements for a review. I voluntarily read this book, and my comments here are my honest opinion. *

Michael A. Simpson is a writer, director and producer of award-winning documentaries and feature films (whose credits include the Oscar-winning “Crazy Heart,” “Hysteria,” and “Kidnapping Mr. Heineken”). He continues his older brother Ron's tradition of questioning authority and speaking out against social and political injustice, as his friends, both real and virtual, will attest. He grew up in dark rooms watching flickering images on a screen, is a connoisseur of raisin oatmeal cookies, a walking storehouse of music knowledge and trivia, finds reasons to get his passport inked whenever possible, and remains a “rebel without a pause.” "Sons of My Fathers," based on his family's history, is his first book.