In Conversation with Dennis Palumbo about HEAD WOUNDS 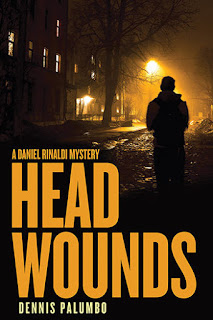 Mike Barson: HEAD WOUNDS is the fifth novel in your series about psychologist Daniel Rinaldi, who consults with the Pittsburgh police. Unlike some authors, you do not write a new book every year… Is that because you spend a lot of time doing research for each new entry?

Dennis Palumbo: Research is always an important aspect of each novel, but the primary reason for the gap between books is that I have a full-time private therapy practice (35-40 patients a week). So my writing time is pretty much limited to lunch hours and the weekends. I’d love to put out a new book every year, but given my current clinical schedule, it’s not possible.

MB: Even though you have lived in Los Angeles for decades, you continue to set the Rinaldi series in your hometown of Pittsburgh. What are a couple of the things you particularly love about Pittsburgh?

DP: There are too many to list, but I’d definitely start with the people—friendly, colorful, opinionated, and with familial roots going back generations. Certainly true of my Italian family, tracing back to immigrants who arrived at Ellis Island. Then, as a locale in which to set a mystery series, the city itself is an intriguing amalgam of old and new, transitioning from a blue collar, industrial town into a white collar, state-of-the-art tech hub. As you might imagine, this has resulted in an uneasy clash of cultures that I get to explore in my Rinaldi series.

MB: As a licensed psychotherapist, you have knowledge that is not available to us civilians… Have you ever drawn on that expertise to help shape the villains in this series?

DP: Yes, primarily from my earliest clinical work as a staff member at a psychiatric facility. Plus all the research I’ve done on psychopathology and various personality disorders. In terms of how Daniel Rinaldi helps victims of violent crime, I was privileged to work with one of the nation’s leading trauma experts, Dr. Robert Stolorow. My fictional psychologist incorporates much of the wisdom I gleaned from those years when treating these patients.

MB: Growing up, were there mystery authors whom you admired particularly? Did any of them influence your approach to the Rinaldi novels once you commenced writing them?

DP: Wow, so many to mention! I loved Holmes as a kid, and devoured Rex Stout and Dickson Carr. As an adult, I discovered Chandler and Hammett, as well as Patrica Highsmith, Ruth Rendell and Ross MacDonald. For influences on my Rinaldi novels I’d have to say, first, Michael Connelly’s Bosch books. I also love Dennis Lehane, Richard Price, the late Sue Grafton, and Jeffrey Deaver.

MB: Have you ever received a comment or suggestion from a fan that you subsequently incorporated into one of the Rinaldi books?

DP: Yes, many times over the years. In particular, I’m always amused by fans who live in or know the Pittsburgh area. They rarely comment on the characters or plot, but point out that I have a street name wrong, or I that I mentioned a building that’s been torn down. My favorite comment was from a Pittsburgh city planner, who said she loved my books but felt that the route I describe for Rinaldi’s trip home from work doesn’t make sense given the rush hour traffic. So she laid out a better route, which I adapted and used in the fourth book, Phantom Limb. I even gave her an acknowledgement at the front of the book.

MB: When you are reading for pleasure, whose work among your fellow contemporary crime writers do you particularly enjoy?