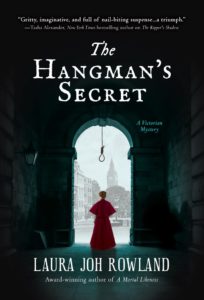 Laura Joh Rowland, The Hangman’s Secret
London, 1890
This is the second in Rowland’s new Sarah Baine series, set in Victorian London. Baine works as a photographer when she’s not solving crimes with her loyal group of friends; in The Hangman’s Secret, Baine comes up against villain Amelia Carlisle, based on a number of late 19th century baby farmers who took in scores of young children only to kill them through slow neglect (or outright murder). Rowland is the author of two other historical crime fiction series: the San Ichiro mystery series, set in early 19th century Japan, and the Secrets of Charlotte Bronte series, in which Charlotte finds herself embroiled in many an investigation while romancing a secret agent.
Read more