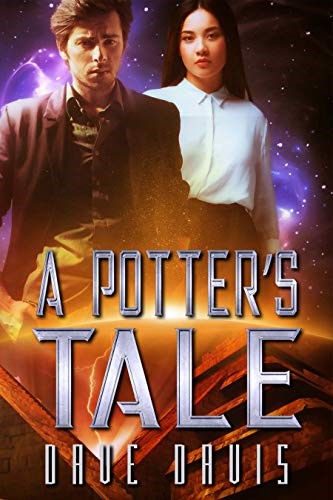 A fascinating and intriguing tale of life, love, betrayal and murder, Dave Davis’s A POTTER’S TALE challenges readers with mysteries from the past, the brilliance of a present day life snuffed out too soon and long held secrets that could spell the destruction of the universe.

When a former physician now reporter teams up with his tenacious partner, they had no idea that the story of the murdered teen would lead them across continents, civilizations, religions and scientific research facilities. Who is trying to cover up hidden secrets of the universe? To what end?

Dave Davis has added enough twists and left enough imaginative breadcrumbs along the way that science fiction buffs, history buffs and lovers of all things mysterious and suspenseful will each find a compelling reason to turn page after page! Taut writing, believable characters and some “didn’t see that coming,” moments make this one of those tales that boggles the mind, because, what if?...

Love. Betrayal. Murder. Then the universe started to collapse. They say it all started in 1935 when Roz Lhulier and his team unearthed the massive tomb of Pakal, the greatest Mayan king, and with it, an ancient text, called a codex. They're wrong.

The codex is deciphered by Alan Turing, the genius who broke the German's Enigma Code during WWII, but its message is jealously guarded by the Astronomers, a lethal offspring of the Catholic Church. Astronomers have compromised or killed anyone with knowledge of the secret--presidents and prime ministers, just for instance.

The codex pulls others into its deadly orbit: Noah, a former physician, and his partner Kate, reporters for the Washington Post. They investigate the murder of DiShannia, a precocious teen, who's achieved national recognition for her research on the demise of Mayan civilization. They're led from Washington DC, to the British Museum, to the Center for Nuclear Research in Geneva, to Melbourne, Australia.

The two strands of the novel--the codex and its rich human stories--are joined by another narrative, creating a kind of weird DNA. This third strand involves the Potter, who crafts the story. And the genes that craft us all.

Does the universe collapse? The Potter knows the answer. Noah, Kate discover it. We learn it too--on the last page.