For Writers, Silence Might Not Be Golden After All 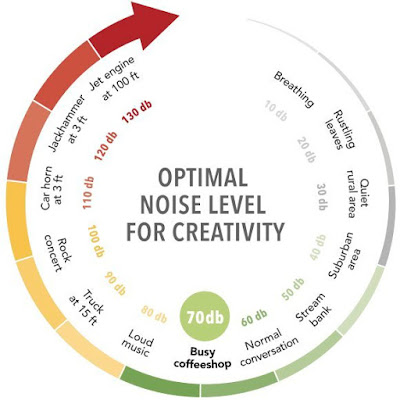 Certainly, many eminent writers from the past shunned clamor. Consider Marcel Proust. To remark that the French writer was sensitive to auditory interference would be an understatement. The man was positively neurotic about it. He treated the bedroom in his Paris apartment where he wrote like a sensory deprivation chamber—shutters closed, drapes drawn, the walls lined with sound-absorbing cork. It wasn’t enough. He wore earplugs too.

Anton Chekhov was similarly beset by hypersensitivity to sound. So was fellow obsessive Frank Kafka, who described his condition in his signature surreal style by saying that “I need solitude for my writing; not ‘like a hermit’—that wouldn’t be enough—but like a dead man.” Sadly, by the time he got his wish, it was too late to do anything about it.

The correlation between high-level inventiveness and difficulty in filtering out sensory inputs is understandable, given that open-mindedness is a hallmark of the creative personality. The problem for off-the-chart geniuses like Proust, Chekhov, and Kafka was that their minds were a bit too open. Everything got through. Hence the extreme measures they took to avoid being immobilized by incoming stimuli.

...silence isn’t as golden as it sounds. Absolute noiselessness tends to focus our attention, which is helpful for tasks that entail accuracy, fine detail, and linear reasoning, such as balancing our checkbook or fixing a Swiss watch. It’s less supportive of the broad, big-picture, abstract mind-wandering that leads to fresh perspectives and a creative work product. On the other hand, excessive noise overwhelms our sensory apparatus and hinders our ability to properly process information at all. In between lies the sweet spot—noise not so loud that we can’t hear ourselves think, and not so quiet that we can’t help but hear ourselves think.