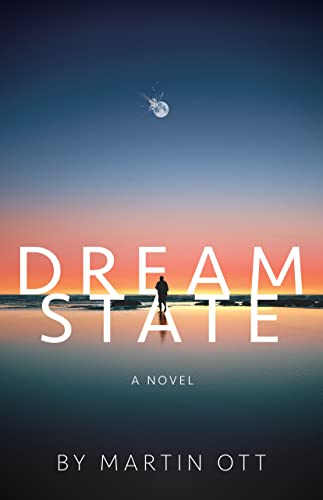 Dream State is a different kind of Thriller that plays off on an Island – Beleze, experienced by three characters Heidi, Russel, and Marley.

Oddly enough, I kept thinking about Sandman which obviously also revolvesaround dreams and the lack of it. I didn’t finish the series (and I know peopleare going to castrate me for this –but — I just didn’t enjoy it)

Having said that, lack of sleep is absolutely something relatable and themadness that derives from its absence is a reality I think many can relate to. Martin nailed the mind sets created from sleep deprivation one hundred percent along with the psychological effects on people.

The book is a fast-paced attention read, in the sense that you really need to keep track of the characters, their past, their present and their existing surroundings. Whilst I really enjoyed the different read, – because it’s not something I would usually deviate to – I did feel that the regular play back on the characters pasts drew away from the story and its progress. Yes, it did give us insight into what makes them tick, but the take back, was consuming in some instances. I also struggled to really connect with any of the main characters, although strong leads there was something amiss. I settled that debate by convincing myself that logically they are lacking something — sleep.So, if that was the intent, its applaudable.

The setting revolves around the moon being hit by an asteroid and the impact it has on everyone on the island and then of course the bigger impact on the world.

It focuses on the ways people deal with the lack of sleep, how they interpret different people’s actions, how their pasts haunt their present existence and how they cope with impulsive irregularities in their existing environment. As if that isn’t enough, people also need to deal with groups trying to take over the island and pirates roaming the surrounding sea.

Plus, for its innovation, the thought it provoked and the thriller tone that absolutely glares you in the eye with the madness created, minus because I didn’t connect with it in similar fashion to the likes of The Interrogators Notebook, which I still love and wish someone would take to screen.

For more on this crazy adventure you can go to Amazon and purchase the book
for Kindle or Paperback. You can also connect with the Author on his Website, on Instagram, Twitter and on GoodReads.

You can also go view Nadine's previous Interview with Martin Ott and my Review on The Interrogators Notebook.