The Times' 1983 review of Umberto Eco's 'The Name of the Rose:' An intriguing detective story 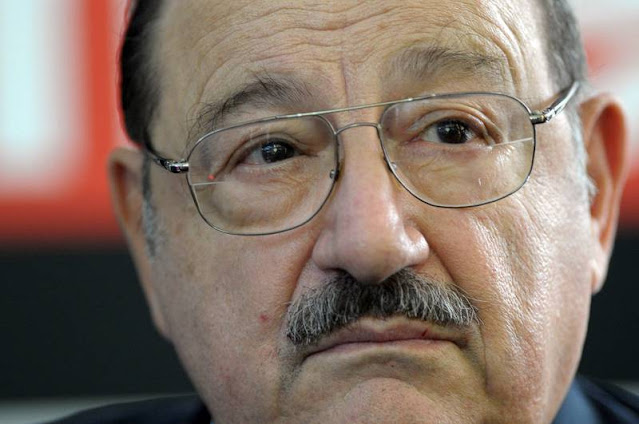 There is a kind of novel that changes our mind, replaces our reality with its own. We live in a new world after we've read it. Umberto Eco, the celebrated Bolognese semiotican and Joyce scholar, brings us a new world in the tradition of Rabelais, Cervantes, Sterne, Melville, Dostoevsky, Joyce himself, and Garcia-Marquez.

We recognize the author's claim--or disclaimer--in the prologue to his "terrible story of Adso of Melk": that it's a hasty translation of a lost transmittal copy, that he's uncertain about its value and about the need to publish it. He refuses to allow his reader to easily suspend disbelief because his purpose is to explore the relationship between belief and narrative.

Filled with the good-natured polyglot banter of the superfluosly learned, "The Name of the Rose" might be seen only as a effete "Canterbury Tales" except for tell-tale markings on the walls of its medieval monastic library, markings declaring that this records of those walls' destruction is itself a labyrinth in the library's image. We learn the markings, deconstructing the book as we read. We see how the labyrinth operates on more than one level-in our imitative act of finding our way in and out. Eco makes his intellectual riddles accessible by weaving them into an intriguing detective story. A series of grisly murders turns Brother William of Baskerville, and his assistant Adso (our narrator), into prior-day Sherlock Holmes and Watson.

William is friend of Occam, admirer of Bacon, devotee of Aristotle, and consumate practitioner of Thomistic analysis. Like Joyce's Dedalus, he studies the world's signs and cluse with eyes both open and closed; his vision is so exhaustive--literally and metaphorically--that he at one point sees through six eyes.

Through the course of their investigations of the abbey's crimes and its secret heresy, we're given the flavor of the waning Middle Ages in Southern Europe, the ephemeral unity of medieval thought under the Thomistic rule had long since been abandoned as a possibility, and Aquinas himself, suspected of having been a self-important windbag. Now "everything looked the same as everything else," and all morality is arbitrarily and universally metamorphosed.

If you had a romantic notion of the relative simplicity of the late Middle Ages, Eco modernizes your view. He paints a time of multiple popes and multiple anti-Christs, a time when a man would trade sexual favors for a book, when the papal palace in Avignon displaced "crucifixes where Christ is nailed by a single hand while the other touches a purse hanging from his belt, to indicate that he authorizes the use of money for religious ends..."

In a time of diminishing belief, all hands reach desperately from the encroaching shadows of doubt. There were monsters in the imagination in those days: "The cynocephali, who cannot say a word without barking... blemyae, born headless, with mouths in their bellies and eyes in their shoulders... and those whose soles are reversed so that, following them by their footprints, one arrives always at the place whence they came and never where they are going..."


No less marvelous, in the vanished monastery we find their counterparts in a guarded reliquare displaying "the tip of the spear that pierced the side of the Saviour!," "a yellowed shred of the tablecloth from the last supper," "a piece of the manger of Bethlehem," ..."a tibia of Saint Margaret," "a rib of Saint Sophia," "the chin of Saint Eobanus," "a tooth of the Baptist," "Moses' rod," "a tattered scrap of very fine lace from the Virgin Mary's wedding dress"--and much, much more.

Later, in Ados's dream during the "Dies Irae" of Terce, the holiness is comically transformed into "the tail of Saint Ubertina, the uterus of Saint Venantia, the neck of Saint Burgosina engrained like a goblet at the age of 12..." The narrator's dream itseld is one of the richest in 20th-Century literature, a mad comination of Fellini, Fuentes, Borges and Bosch. William's interpretation shows how his assistant's dream was a dream of books, a dream of dreams, of a past and future inextricably mixed in imagination--a triumph of intertextuality. And it provides the key to the mysterious and outrageous crimes they're investigating.

Criminal investigation and exploration of theology and the mentality of the era are interlaced with a comic explosiveness of language reminiscent of Rabelais, as when the semi-demented Salvatore fives Adso a recipe: "Facilis. You take the cheese before it is too antiquum, without too much salis..."

Eco's characters may verge on the dry, but the plot is as neat as Conan Doyle or Christie, with ironic undertow echoing Chesterton's Father Brown series.

The interplay between Adso and William like that of Quixote and Paza, involves us in the paradoxical mind of the times: a delicate but thorough mixture of rationalism and superstition. We prefer, by authorial design, Adso--even when his private opinions nudge against a heresy not yet born: "The older I grow and the more I abandon myself to God's will, the less I value intelligence that wants to know and will that wants to do; and as the only element of salvation I recognize faith, which can wait patiently, without asking too many questions."

Eco dances on the banks of allegory without drowning in its inane waters. As his characters wrangle over the question of whether Christ possessed property, the narrative offers chilling insight into mores that suggest those of our own time, when the Church of Rome, for all it ecumenicism and globetrotting Popes, still belies its own vow of poverty.

But the book's central dialogue is between men and books, and books and books, and only through the latter, men with men. We harbor the notiron of a preliterary world, where ideas have yet to be born and we commune directly with reality. William disillusions Adso of that concept, and Adso admits the lie: "Until then I had thought each book spoke of the things, human or divine, tha lie outside books. Now I realized that not infrequently books speak of books... In the light of this reflection, the library seemed all the more distrubing to me. It was then the place of a long, centuries-old murmuring, and imperceptible dialogue between one parchment and another, a living thing... a treasure of secretes emanated by many minds, surviving the death of those who had produced them or had been their conveyors."

When the labyrinth is unwoven we're not surprised that "the plan of the library reproduces the map of the world." When the crime itself is solved, the cause is not a contemporary murderer but... I won't spoil the the book for you. Suffice to hint that laughter and comedy move from the diabolic to the humanistic, that the name of the rose is a play of words.

A true investigation succeeds from a false pattern, and the plot to destroy comedy is succesful by accident. But the investigation's success is superficial. William's antagonist, Jorge of Burgos (foreshadow of Luis Borges), succeeds in repressing the book which might have undermined the stucture of all holiness. William accuses Jorge of being Satan: "The Devil is not the Prince of Matter; the Devil is the arrogance of the spirit, faith without smile, truth that is nevere seized by doubt."

A book like this seeks to replace the world with itself, and eventually does so, showing the reader that reality, except as vision, is already inaccessible; that only vision matter; that even before he began reading it can lead us to recite, with a Kempis, the great imitator: 'In omnibus requiem qaesivi, et nusquam inveni nisi in angulo cum libro.' " (In all things I have sought peace, and nowhere have I found it except in a corner with a book.)
I met Umberto Eco just once, but it was enough to impress me with the awe reserved only for the most serious storytellers I’ve come in touch with over the years, like Carlos Fuentes and Eugene Ionesco. By sheer serendipity, our offices were adjacent at the University of Bologna, when I was Fulbright professor there. Still, I was surprised to hear from him after my review of The Name of the Rose in The Los Angeles Times appeared. He called it, “the best review I’ve read,” and republished it in his Essays on the Name of the Rose (Bompiani, 1985). May he rest in honor.