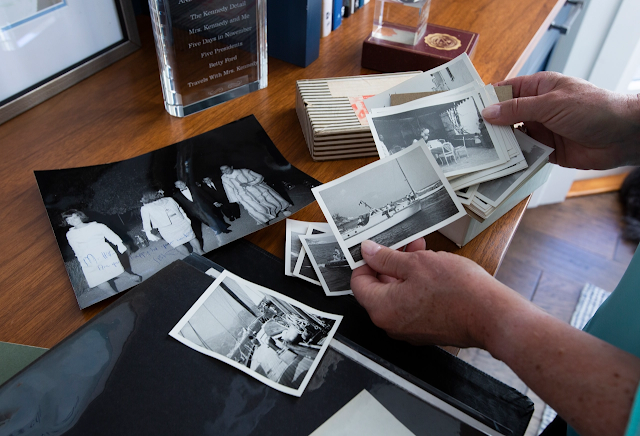 Clint Hill has never been one for awards or accolades. The retired Secret Service agent thought he was just doing his job when he jumped up heroically onto the back of the limousine carrying President John F. Kennedy in Dallas on Nov. 22, 1963, after gunshots were heard in an effort to protect him and First Lady Jacqueline Kennedy — a historic image that has become synonymous with the heartbreaking day. He is credited with saving Jacqueline Kennedy’s life, and was awarded the U.S. Treasury Department’s highest civilian award for bravery a month later.

It’s a medal Hill didn’t think much about until nearly 60 years later when he planned to sell his former house in Alexandria, Virginia, in 2019. While he thought he’d sorted through what was of value, his co-writer and now wife, Lisa McCubbin Hill, convinced him that they needed to finish cleaning up the house themselves, locate the missing medal and not allow strangers to determine “what was trash and what was history.” He agreed. 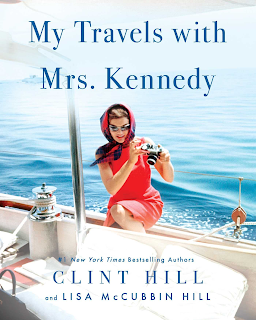 “I never wanted it, never thought I deserved it,” the 90-year-old Belvedere resident writes about the medal in “My Travels with Mrs. Kennedy,” which he co-wrote with his wife, whom he married in 2021. “I didn’t see myself as brave. I was just doing my job. As a Secret Service agent on the White House detail, I had trained for that moment. Trained to jump into the line of fire, to be a human shield for the president, the first lady, or whomever we were assigned to protect. But I would never get over the feeling that if only I had reacted a little bit quicker — one second, or maybe half a second — I wouldn’t be here, and there’d be no damn medal.”

They found an old streamer truck that hadn’t been opened in 50 years. It was a treasure trove of his four years with Jacqueline Kennedy after being assigned to her detail in 1960 — an array of signed photos, mementos and handwritten notes from their travels around the world, including Paris, Pakistan, India, Morocco and Mexico.

The Hills share these rare stories and some never-before-seen photos as part of “My Travels with Mrs. Kennedy,” their fourth book together, which they will discuss with Book Passage co-owner Elaine Petrocelli at 1 p.m. Saturday at the Corte Madera bookstore.

“It took on a life on its own. We were just looking for a project during lockdown and it really became something really therapeutic for Clint, for both of us,” McCubbin Hill says. “He has such an incredible memory and some of the stories he had told me before, but it was amazing to find those mementos.”

He shares stories of the hundreds of thousands of people who lined up to see the Kennedys in Paris, how Jacqueline Kennedy charmed her way to letting the “Mona Lisa” be loaned from France, accidentally eating cannabis in a “mahjoun” in Morocco and how she connected with the late Queen Elizabeth II about their similarities.

“They were close in age. Four years apart in their 30s,” Hill says. “They both had small children, they both loved horses. They both were in jobs they didn’t anticipate when they were youngsters.”

Some of the found items include a signed photo of Jacqueline Kennedy with President Kennedy, the late André Malraux, the French minister of cultural affairs, and his wife that Jacqueline Kennedy gave him in 1964; intimate photos with her children in Virginia, as well as Hill’s notebook detailing their constant travels in 1964, the year after the assassination, a time he wasn’t ready to talk about in his previous books.

“And that’s another theme in that book, that the travel helped both of them cope with the tragedy,” McCubbin Hill says.

After spending time with Jacqueline, Caroline and John Jr. Kennedy for a year after the assassination, Hill was reassigned to the White House in November 1964 and eventually became the special agent in charge of presidential protection during Lyndon B. Johnson’s administration. Hill, who started as a Secret Service agent in 1958, served five presidents — Eisenhower, Kennedy, Johnson, Nixon and Ford — until 1975.

“There was a great group of people involved,” he says. “The Secret Service at the time was very small, with around 269 agents in the entire organization worldwide, and only about 30 assigned to the White House. It was a great camaraderie and there’s a group of us that are still close today.”

Although Hill once dreamed of being a history teacher and athletics coach, when he finally started looking at jobs after college and being drafted in the United States Army, where he was a special agent in the Army Counter Intelligence Corps, it didn’t give him any “warm and fuzzy feelings.”

“I decided I would try to get a job in some way similar to what I had been doing in the military,” he says.

And the rest was history.

It’s still hard for Hill to put into words the bond that he shared with Jacqueline Kennedy, a “down-to-earth” woman who spoke multiple languages and mingled easily with heads of state and others she came across in her travels, a loving mother who doted on her children and who blossomed in front of Hill’s eyes after being thrust into a role she didn’t choose for herself. It was important for him to show all these sides to her, to showcase the woman he admired and respected, and how she was really like.

“People commented she was remarkable as an ambassador. She did more good for the country than other ambassadors,” he says.

“America was beloved around the world in large part due to her,” McCubbin Hill adds. “She was able to connect with people all around the world. You can see in the photographs thousands of people who would come to see her wherever they were. They just loved her.”

Kirkus Reviews calls their book a “fond remembrance of a glamorous, bygone era.” According to Publishers Weekly, it’s “a page-turning portrait of the Camelot era.”

Hill told himself he’d never write a book or talk to a reporter about his experiences in the Secret Service, especially not what he went through in 1963. But, his friend Gerald S. Blaine, a former U.S. Secret Service agent who was assigned to President John F. Kennedy and was also present at the assassination, convinced him to do an interview with McCubbin Hill for the book they were writing together called “The Kennedy Detail” in 2009.

“I helped her and did research for her, then the publisher asked me to go along on the book tour because I was very knowledgeable about the subject matter and so I did,” he says. “I got to know Lisa much better. We had a good relationship and I trusted her and we got closer and closer.”

He began to open up to her about his experiences and decided to finally write a book with her, “Mrs. Kennedy and Me,” which came out in 2012.

“He had been disgusted about a lot of the things that had been written by friends of friends of friends, people that didn’t really know her and I said, ‘If you write a book, it could be a tribute to her and you can choose what to put in and what to leave out and nothing salacious’ and he realized he wanted to do that,” she says.

As their relationship deepened, it was therapeutic for him to share things with her and be able to write about his experiences, especially with what happened in 1963. In their latest book, he shares his experiences with PTSD and a suicide attempt after he walked into the ocean in 1963 and was pulled from the water by a police officer.

“I had that feeling of failure because of how I grew up,” he says. “My dad taught me that you were given a job to do, you do that job to completion, right and properly. And then you can start something new. We didn’t finish that job, protecting the president, we failed and that’s been with me ever since. … Once I met Lisa, I began to unload the things I had built up in my brain regarding the assassination, all the things around it. It was very cathartic, the more I talked to her and subsequently write books, and talk to the general public, it was all in my best interest. I am fortunate that I did that, and I encourage anyone who is suffering from PTSD to find someone they trust and talk about the situation and go through what happened.”

When the Hills went through that oversized trunk in 2019, memories came flooding back to him. And he’s glad he’s able to share them about the woman whose time with he’ll always cherish.

“When I look at these photographs of Mrs. Kennedy as we traveled through Europe and Asia and South America, I realize now what a privilege it was to have been part of those private, joyful moments she experienced,” he writes.