Saving the Story (the Film Version)

LOS ANGELES — The movie world has been fretting for years about the collapse of stardom. Now there are growing fears that another chunk of film architecture is looking wobbly: the story.

In league with a handful of former Hollywood executives, the Massachusetts Institute of Technology Media Laboratory plans to do something about that on Tuesday, with the creation of a new Center for Future Storytelling.

The center is envisioned as a “labette,” a little laboratory, that will examine whether the old way of telling stories — particularly those delivered to the millions on screen, with a beginning, a middle and an end — is in serious trouble.

Its mission is not small. “The idea, as we move forward with 21st-century storytelling, is to try to keep meaning alive,” said David Kirkpatrick, a founder of the new venture.

Frank Moss, right, of the M.I.T. Media Lab, and David Kirkpatrick, left, of the Center for Future Storytelling, with a friend. 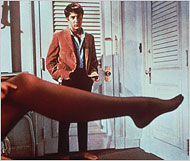 Once president of the Paramount Pictures motion picture group, Mr. Kirkpatrick last year joined some former colleagues in starting Plymouth Rock Studios, a planned Massachusetts film production center that will provide a home for M.I.T.’s storytelling lab while supporting it with $25 million over seven years.

Arguably, the movies are as entertaining as ever. With a little help from holiday comedies like “Yes Man” with Jim Carrey and “Bedtime Stories” with Adam Sandler, the domestic motion picture box office appears poised to match last year’s gross revenues of $9.7 billion, a record.

But Mr. Kirkpatrick and company are not alone in their belief that Hollywood’s ability to tell a meaningful story has been nibbled at by text messages, interrupted by cellphone calls and supplanted by everything from Twitter to Guitar Hero.

“I even saw a plasma screen above a urinal,” said Peter Guber, the longtime film producer and former chairman of Sony Pictures Entertainment who contends that traditional narrative — the kind with unexpected twists and satisfying conclusions — has been drowned out by noise and visual clutter.

A common gripe is that gamelike, open-ended series like “Pirates of the Caribbean” or “Spider-Man” have eroded filmmakers’ ability to wrap up their movies in the third act. Another is that a preference for proven, outside stories like the Harry Potter books is killing Hollywood’s appetite for original storytelling.

Mr. Guber, who teaches a course at the University of California, Los Angeles, called “Navigating in a Narrative World,” is singularly devoted to story. Almost 20 years ago Mr. Guber made a colossal hit of Warner Brothers’ “Batman” after joining others in laboring over the story for the better part of a decade.

But in the last few years, Mr. Guber said, big films with relatively small stories have been hurried into production to meet release dates. Meanwhile, hundreds of pictures with classic narratives have been eclipsed by other media — he mentioned “The Duchess,” a period drama that foundered last month as potential viewers were presumably distracted by the noise of a presidential election — or suppressed by louder, less story-driven brethren.

“How do you compete with ‘Transformers’?” asked Mr. Guber.

Ultimately, he blames the audience for the perceived breakdown in narrative quality: in the end, he argued, consumers get what they want. Bobby Farrelly, a prolific writer, and director with his brother Peter of comedies like “There’s Something About Mary” and “Shallow Hal,” concurred.

“If you go off the beaten path, say, give them something bittersweet, they’re going to tell you they’re disappointed,” Mr. Farrelly said. He spoke from his home in Massachusetts, where he is working on the script for a Three Stooges picture, and said he missed complex stories like that of “The Graduate.”

At the Sundance Institute, as it happens, other deep thinkers tend to think that film storytelling is doing just fine.

“Storytelling is flourishing in the world at a level I can’t even begin to understand,” said Ken Brecher, the institute’s executive director. Mr. Brecher spoke last week, as his colleagues continued sorting through 9,000 films — again, a record — that have been submitted for the coming Sundance Film Festival.

The festival, set for Jan. 15 to Jan. 25 in Park City, Utah, will have story as its theme. The idea, Mr. Brecher said, is to identify film stories that have defined the festival during its 25-year run, and figure out what made them tick. (Mr. Brecher said the final choices had not been made and declined to identify candidates.)

If anything, Mr. Brecher added, technology has simply brought mass storytelling, on film or otherwise, to people who once thought Hollywood had cornered the business.

“One of the most exciting things I’ve run into is a storyteller who’s been texting his stories into the urban centers of Kenya,” said Mr. Brecher, an anthropologist by training.

The people at M.I.T., in any case, may figure out whether classic storytellers like Homer, Shakespeare and Spielberg have had their day.

Starting in 2010, a handful of faculty members — “principal investigators,” the university calls them — will join graduate students, undergraduate interns and visitors from the film and book worlds in examining, among other things, how virtual actors and “morphable” projectors (which instantly change the appearance of physical scenes) might affect a storytelling process that has already been considerably democratized by digital delivery.

A possible outcome, they speculate, is that future stories might not stop in Hollywood all. “The business model is definitely being transformed, maybe even blown apart,” said Frank Moss, a former entrepreneur who is now the media lab’s director.

Mr. Kirkpatrick is not completely at ease with that prospect, partly because his Plymouth Rock Studios, a $480 million enterprise, will need scores of old-fashioned, story-based Hollywood productions to fill the 14 soundstages it plans to build.

In a telephone interview last week, Mr. Kirkpatrick said he might take a cue from Al Gore, who used a documentary film, “An Inconvenient Truth,” to heighten concern about global warming. Mr. Kirkpatrick is now considering an alarm-bell documentary of his own, he said.

Its tentative title: “A World Without Story.”